Joe Lashmar: Milling around on the Island

Home|Countryside, Interviews|Joe Lashmar: Milling around on the Island
Previous Next

Joe Lashmar: Milling around on the Island

Windmills and water mills were an integral part of life on the Isle of Wight for many centuries. More recently their numbers have dwindled dramatically, although Bembridge Windmill and the water mill at Calbourne are shining examples of two types of mills and the role they played within the Island community.

Local research has revealed that mills were in existence here in the Saxon period, and it has been suggested the Romans used them while draining local meadows. In all, it has been discovered, that at one time or another there have been on the Island 14 windmills, seven tide mills, two paper mills, three fulling, two steam over, and no fewer than 40 water mills, as well as numerous animal corn mills and animal-drawn lifting mills, such as the one at Carisbrooke Castle.

Over more than 20 years, Joe Lashmar, a retired engineer who lives in Shide, has painstakingly discovered sites where mills once stood, researched them and drawing pictures of how they might have looked in their prime. They include two that even King Harold – he of the arrow in his eye – owned on the Island, as well as others that were mentioned in the Domesday Book.

Joe explained: “When I retired in 1990 I began keeping bees, and among the beekeepers there were lots of discussions as to whose bees were bringing in linseed, or flax as it is also known. I did some research and found out that Haseley Manor was the first flax fulling mill on the Island, and only the second or third in the whole of the country. It was built by monks from Quarr Abbey just before the 13th century.

“I then picked up a book on Island Mills, but soon discovered there were many mills not mentioned in it that had existed. So I began tabulating all the mills myself, and have come across about 70 altogether on the Island, and drawn them all.”

Joe has also included some panoramic views of the various valleys on the Island where mills were prominent, one of which stretched from Clatterford paper mill along Lukeley Brook through Carisbrooke, and up to St Cross Mill, close to where the Lidl store now stands in Newport, and can still be partially seen when looking up the river. More recently Joe discovered the sites of two more mills near Newport, Forte Mill and Hunnyhill.

He said: “The most recent one I have drawn stood at Kern Manor Farm, Brading, and that, along with Haseley Manor Fulling Mill, were owned by King Harold. I knew he was on the Island at one time, but did not know he had property here until I did the research, and found it was written in the Domesday Book. 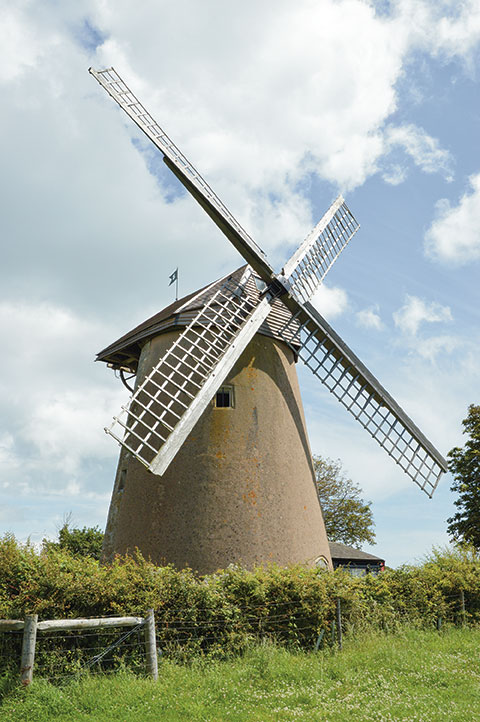 “In all there were 24 Island mills mentioned in the Domesday Book, not the half a dozen that people originally thought. There were only six churches recorded, but 110 Manor Houses in 30 parishes. Now there is only one working water mill left on the Island, and that is at Calbourne.”

He continued: “Yafford Mill is still intact and could one day become a tourist attraction but I think one of the most interesting is St Cross Mill in Newport which has real industrial heritage. Its 10ft wheel ceased in 1939, but it really should be transformed into an Island industrial heritage museum site. That is one of several mill sites that could be brought back to life.

“One of the most interesting of all was the East Medina Tide Mill, which could work on an incoming and falling tide, and was built around 1780 by William Porter, who also owned West Medina Tide Mill. It was known as Botany Bay Mill because prisoners from Parkhurst were loaded onto transport ships there to be taken to the colonies.”

Joe admits he has spent quite a lot of money on researching mills on the Island, and has always wanted to publish his book on the subject. But the overall printing costs of such a project have been too high, so he continues to carry out his discoveries more as a hobby.

“I suspect there were more mills on the Island that I haven’t found out about yet. I have been told there were once windmills on the road down to Yarmouth, so I am are there are still some undiscovered ones out there,” he added.