Martin Woodward: Martin’s amazing life on and under the ocean waves…Pt.1

Home|Interviews|Martin Woodward: Martin’s amazing life on and under the ocean waves…Pt.1
Previous Next

Martin Woodward: Martin’s amazing life on and under the ocean waves…Pt.1 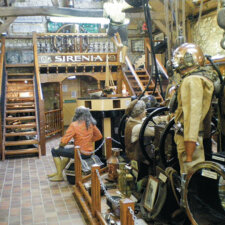 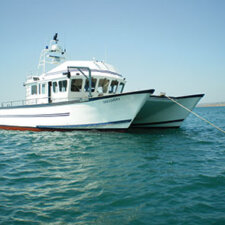 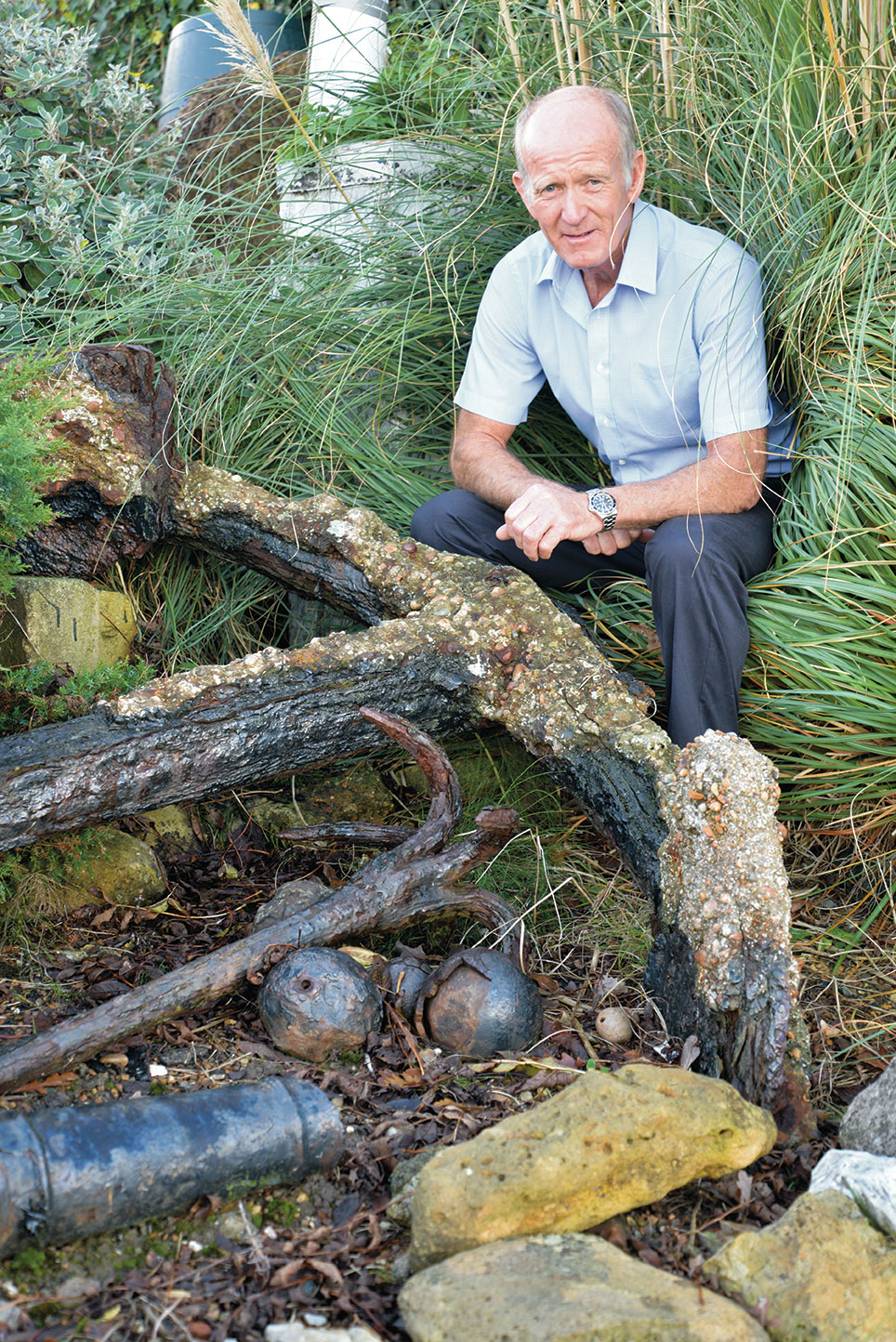 Martin Woodward’s tales of his life at sea, and under it, sound like the script of an adventure movie. Here’s a man who for the past 40 years has boarded ships, searched them and often left with pieces of eight, solid gold rings and other valuables.

But Martin, who lives in Bembridge, is certainly no pirate, and none of the valuables and artefacts he has collected have been for his own gain. He is a shipwreck diver, someone who descends into the eerie underwater world of tangled metal that has laid on the seabed, or been submerged in mud, sand and silt, for numerous years.

Martin reckons that around the Isle of Wight alone there are some 2,000 wrecks, and he has dived on about 600 of them. He has also pursued his thirst for adventure in many other parts of the world, stretching from the Philippines to the Caribbean.

Yet wreck diving is only a hobby for Martin. For many years his profession was that of a deep sea diver, working in extremely dangerous conditions off oil rigs off Aberdeen, Norway and in the Persian Gulf. And if that was not enough he was also Bembridge Lifeboat coxswain for nine years; second coxswain for nine years and on the crew for 38 years.

He smiled: “I did my first lifeboat launch and rescue a week before my 17th birthday, but I started cleaning the brass on the boat when I was 13 or 14. I went out on the old ‘Jessie Lumb’, the lifeboat from 1939 to 1970; then served on the ‘Jack Shayler and the Lees’, and the Max Aitken III.”

Born in Portsmouth, Martin moved to the Island when he was 10 years old, attending Sandown Grammar School. He said: “I went to Navigation College in London, then worked on tramp ships, but it wasn’t the right decision just going round the world on a ship that had no set route. Then the seaman’s strike came along in the mid-1960s, I didn’t want to get involved, so I came out of the Merchant Navy and got a couple of jobs before I started diving. 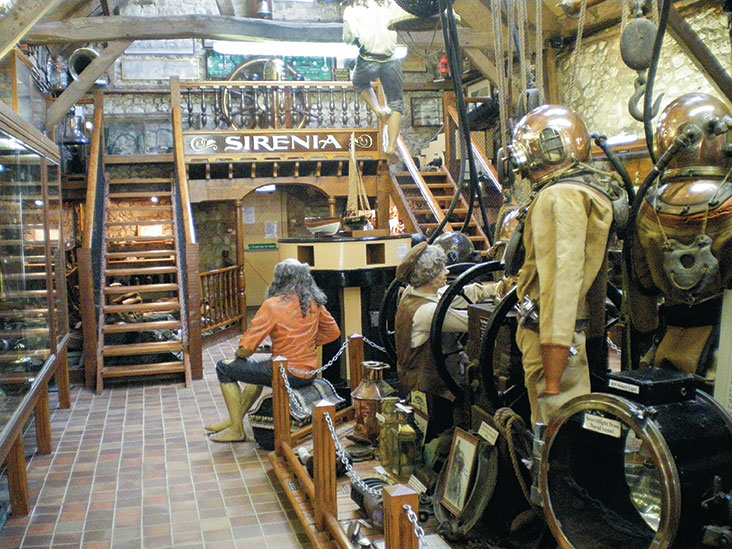 “As a youngster I had spent a lot of time snorkelling around ledges. I had been trained to use a sextant, and met a couple of divers from a local diving company, who said they needed someone who could use a sextant – there was no GPS in those days. So being able to dive and use a sextant enabled me to fall into the job. It was a great education, but people would tear their hair out now at what we used to do.”

Combining work with pleasure, Martin’s first wreck dive was off Bembridge on the Empress Queen. His first commercial wreck dive was of the War Knight off of Freshwater, a 7,900-ton merchant ship that sank during the First World War. He recalled: “I’ve found lots of stuff; I remember finding a light bulb on a ship that had been blown up. Amazingly, the filaments were still intact and the bulb manufacturers were delighted when I wrote and told them. There were always brass portholes about, and over the years I’ve found about 20 ship’s bells.”

Martin owns several wrecks, explaining: “You could buy them off the Department of Transport for about £100, and then legally anything on it was yours. Most of the wrecks around here have been searched, because it became very popular. But in our day it was virtually unknown to dive onto a wreck.”

One of his best finds was the submarine HMS Swordfish in 1983. It made massive news because it was a British submarine that left Gosport in 1940 to go on patrol off Brest in France. As far as anyone knew it got there, but a few days later it was assumed it had been depth-charged. In fact what happened was that it came out of Portsmouth, did a trim dive to adjust the trim of the submarine before it came up to the surface, but hit a German mine and sunk off the Island.

Martin said: “I just came across it, thought it was a U-boat, but discovered it was Swordfish. A total of 40 crew died on that submarine and there was a memorial service later that year in Portsmouth. I went over and 235 people turned up to remember the 40 crew, 43 years after it was lost. It was closure for people who had never known what happened to the submarine.”

He continued: “One of the rarest things I found was an astrolabe, a forerunner to the sextant. When I found it, only 56 others had ever been found throughout the world. It went back to the 1600s, and was off the Island, near Chale Bay.

I have found gold coins and seal rings and I always want to find out where they came from. I just look at it, and think ‘where did this start from or whose finger was this on once?’ Pieces of eight, other coins, lots of things are under there. You have to declare all the stuff. People are not supposed to dive off wrecks I own, but I am not possessive – if I’ve finished with it, let them have some fun.” 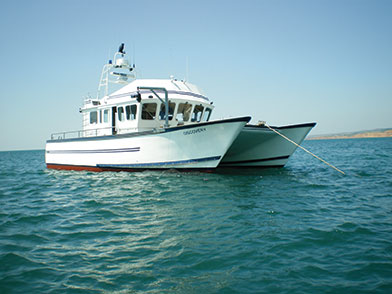 Martin has owned about 10 ships, including warship HMS Velux, a First World War ship that blew up off Bembridge in 1915 after hitting a mine. Some wrecks are intact, but not very often. The majority degrade in the water. “It’s a bit like a scrapyard down there,” he said. “Every wreck has its conger eel, but don’t let anyone tell you they are vicious. They are if you try to catch them on a hook, but underwater they are quite docile, unless you start poking them around. There was one off Bembridge I used to feed by hand; it was about 7ft long. I have been attacked by conger eels twice, but that was my fault. They usually share holes with lobsters, and I was trying to get to this lobster, and the conger had a go at me. The second time one hit my arm – it was like being punched. The biggest one I ever saw was in the War Knight; about 90lb in weight and 9ft long.”

He continued: “Other finds include a gold seal ring dating back to the 1300s with a Coat of Arms on it, which I am still trying to track down. I also found a 1600s seal ring with three dragons on it, and managed to track down the person who was actually wearing it, through the local Family History Society.

“I have found artefacts from ships going back 2,000 years including a rare Roman gold coin. The strange thing is with gold it is like someone threw it into the sea yesterday. Gold coins are pristine when you find them because nothing grows on gold. Coins don’t inspire me, because they were something that went from person to person. I much prefer something like a slave token, which is just a worthless bit of bronze, but was used for trading slaves. I found one from one of their earliest recorded slave shipwrecks in the 1680s.

“I have found rings that are over 700 years old, and coins minted in Spain and South America. I also found a collection of sovereigns and thought it was weird, and also proved sad. A boat had gone down in 1879, and when I looked at the records, I discovered the ship was floundering on rocks, and the carpenter said to the ship’s boy, who was 14, to go below and get the bag with his money in.

“The boy went below, came up but got swept off the boat by a big wave. His body was found a few days later, and the money he was carrying was scattered on the sea bed some distance from the ship. There are stories behind every wreck.”

Next edition: Martin’s amazing deep sea diving trips, and more tales of wrecks around the Island.