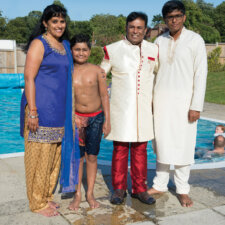 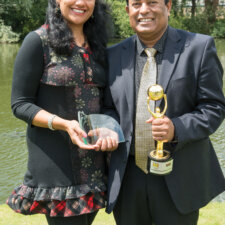 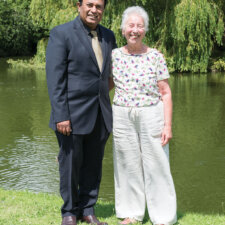 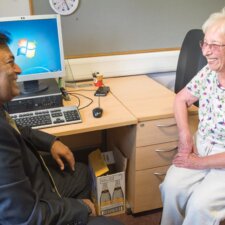 Back in 2004 and working at a corporate Hospital in charge of surgical facility for the poor in India, he had never even heard of the Isle of Wight – but fast forward to 2016 and Associate Specialist surgeon Ramesh Babu Chandrabhan Singh has become something of a local hero to countless local breast cancer patients on the Island.

Known affectionately as Mr Babu, the 50 year-old father-of-two has been widely acknowledged for his pioneering work at St Mary’s hospital, which has now become surgical standard practice.

By administering radio isotope injections when the patient was under anaesthetic, rather than 3-4 hours before surgery as was previously the norm, Mr Babu discovered that not only were recovery results better – but patients also reported much less pain afterwards.

“I had heard of only one other person using this technique in the UK  before I piloted the first 100 cases” he said, “and the results were much better than I ever expected”.

“Patients often used to report a lot of pain from the injection, but when it was given after they had been put to sleep, there was a noticeable improvement”. 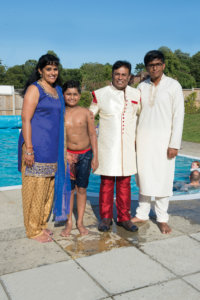 After Mr Babu’s method became the new standard practice in breast cancer surgery, he was presented with a health trust award – and then in 2014 was named ‘Local Hero’ at an Island Awards ceremony.

This in turn was picked up by the Times of India  which featured exceptional professionals around the world and named him as its chosen UK Professional of the Year.

Awards are one thing, of course – but the satisfaction he gains from seeing his patients’ speedy recovery is his main driving force.

With rates of breast cancer still creeping up, Mr Babu has performed almost 500 surgeries since 2014, and is kept busy with a weekly routine of one and a half days in theatre, doing an average of six ops each day along with his  Consultant colleague, Mr Stephen Parker and the rest of his time in breast clinics.

He puts the rising cancer rates down to lifestyle factors such as later pregnancies, alcohol consumption, obesity and family history – and in those respects, the Island is no different from anywhere else in the world.

In fact even in developing Third World countries like India, where Mr Babu began specialising in this area, the numbers are also heading up. 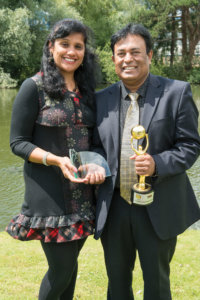 It was the sheer volume of cases occurring there that gave him the in-depth experience, that he brought to the UK in 2004.

“I had worked for four years continuously in surgical camps for the poor, where we offered free check-ups in conjunction with the Health Ministry” he says.

“It was rewarding work, but so busy that I never seemed to have time for my family so when my anaesthetist said he was moving to the UK, I decided to move as well.

Originally landing in London, Mr Babu saw the vacancy for an experienced middle-grade surgeon on the Isle of Wight.

“I had to ask people where was this Isle of Wight – I’d never heard of it!” he says.

But he liked the look of the place right from the day he came for an interview with the surgical consultant – and says “everything fell into place”.

“I was nearly 38 when I came here, and it was a good opening for me.  Once you specialise, you can only get better”.

The move has also been good for family life, giving Mr Babu, his wife Anupama Singh(who also works in the breast unit)  and sons Akshay and Aryan, time to enjoy being on the Island.

Akshay, 18 already looks set to follow a medical career, having recently been offered a place at St George’s in London to study surgery, whilst his 11 year-old brother is also showing early interest.

We do enjoy life on the Island. There’s such a good community feeling – people are very friendly and the hospital is also a friendly place to work” says Mr Babu.

He says there are even similarities between the Island and his home country.

“They are glaringly different in a lot of ways of course, but there’s so much in common: the family values are very strong and there is a lot of warmth between people”.

Naturally there are things Mr Babu misses about India, but he keeps up with family by visiting once a year – and he also helps to bring some of the magic of the sub-continent to the Island, by involving himself with cultural activities run by the strong Hindu community here.

This includes the annual Diwali celebrations at Ryde’s Smallbrook Stadium, which are enjoyed by everyone in the community and grow more popular every year. Its success has led to other festivals being celebrated such as Holi, the Hindu Festival of Colours, which takes place in springtime and Eid during the Ramadan.

“Everyone loves the colours and the costumes” says Mr Babu, who gets into the spirit of the celebrations by singing Bollywood-style and enjoying authentic Indian games such as Kho-Kho and Kabaddi.

He loves the fact that the celebrations have been embraced by the whole community on the Island – and says that to him, it’s proof that he made the right decision in 2004 to make this little corner of the world his home. 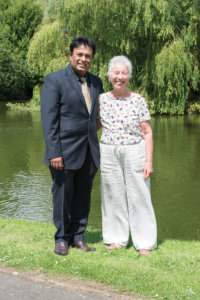 Within the space of just four weeks, Pat Welsh had been for her mammogram, been followed up with an ultrasound scan and biospy, been diagnosed with a lobular carcinoma, and undergone a mastectomy of the right breast.

And her verdict?  “Hand on heart” she says, “there was no pain whatsoever.  It was literally worse when I had dental treatment for a root canal a couple of years ago!”

Pat, 74, who lives in Freshwater, has nothing but praise for “that dear man” Mr Babu. Within days of having her mastectomy at St Mary’s, Pat says she was up and about as if nothing had happened.

“I’m very, very lucky” she says. Always regular with her mammogram checks, Pat noticed she hadn’t had one since 2013 and booked herself in for one on May 20th.  When some irregularities showed up, she was sent straight next door for ultrasound and a biopsy and was then quickly referred to consultant Stephen Parker.

By June 20th the surgery had been performed by Mr Babu.

“When I was under, he found three or four cancerous dots, so had he not removed the whole breast, I would have had to go in again for more surgery”.

Now she is receiving post-operative care and advice at Applegate with Breast care nurses- Alana Bell and Clare Hocknull, which includes bra-fitting, and says she can’t fault any part of the service she has received.

“It’s come and it’s gone – everything happened so fast between May 20 and June 20, and even the drain coming out at the Brookside Clinic, which I’d worried about –  I didn’t feel a thing.  Everyone’s been shocked at how fast I was up and about again”.

Now Pat is passionate about telling other women to have their mammograms.  She hadn’t felt ill in any way before she went for her check-up, so it might have gone undetected.

Now she is concentrating on getting back to 100{a9dddf1bd2af35332cd5613cac8e63e148b38f23ebed35c9943c32a7f65a9815} fitness, doing her recommended physiotherapy exercises, and swearing that her regular practice of yoga in recent years has helped in the healing process.

Thanks to Mr Babu and the breast care team at St Mary’s, she says, she can hopefully now look forward to many more years of active healthy life with husband Les.