Keith Jacobs: Keith sees the world in a grain of sand

Home|Interviews|Keith Jacobs: Keith sees the world in a grain of sand
Previous Next

Keith Jacobs: Keith sees the world in a grain of sand 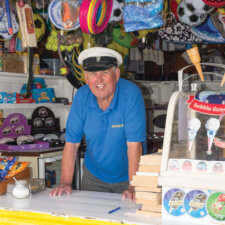 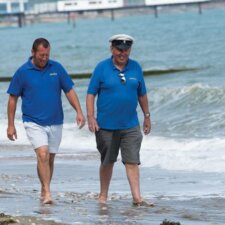 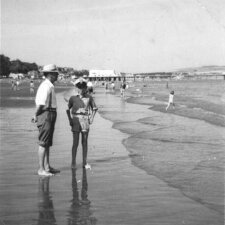 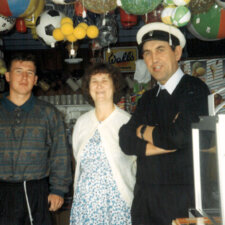 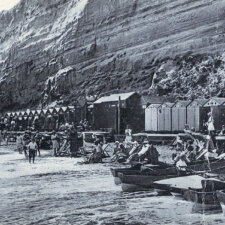 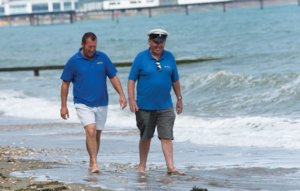 He’s literally spent six decades of his life on the beach, becoming a familiar face to generations of holidaymakers and locals in Lake, Sandown – and at the age of 70, there’s still nowhere else that Keith Jacobs would rather be

Jackie McCarrick caught up with him after he’d folded up the deckchairs and shut down the tea hut on another day by the shore.

Whilst many of his cousins and schoolmates were straining at the leash in the 1950s,  eager to flee the Isle of Wight and make their fortunes on the mainland, the young Keith Jacobs had other plans – and they involved staying right where he was.

In fact Keith reckons he discovered his path in life at the tender age of 10, which was when he began helping out at his family’s traditional beach hire business in Lake, after school and at weekends. He quickly settled into the fresh air routine of physical work and chatting to people, and spent more and more of his free time at Hinks & Sons until he was ready to leave Fairway Secondary Modern School at the age of 15.

“I did think of going into the Navy or all the usual kind of jobs” he says, “but I was so happy doing what I was doing, that I decided I could do a lot worse than sticking with it”.

The traditional seaside business, with its beach huts, deckchair hire, boat hire and tea hut, was established in 1920 by a Great Uncle, Walter Hinks, and Keith came into it via his Aunt Ena, who had married into the Hinks family. 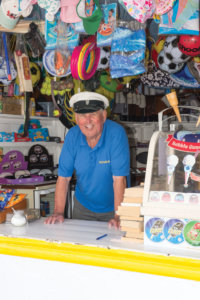 Aunt Ena and Keith’s mother Lillian were the stalwarts of the tea hut, whilst he helped his uncles Bert and Ted, fetching and carrying the huge stacks of stripey deckchairs they would hire out each day, back in the heyday of the traditional seaside family holiday.

“Back then we could easily handle 1,000 chairs a day, and Hooper’s next door to us would do the same” he recalls.

“Now, we’d be lucky to do 300 because the holiday business has changed so much. People bring their own chairs a lot more – that’s if they even sit down at all!

“If there’s so much as a few spots of rain, they all scurry away, whereas in the old days families would settle on the beach for the day pretty much whatever the weather, because that’s what they’d come for.

“Most families would come on holiday for 14 days – and they’d spend at least 12 of those on the beach”. 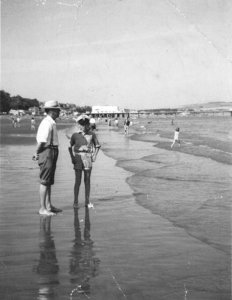 When Keith started out as a deckchair boy, visitors were paying four old pennies (less than 2p) to hire a chair for the morning or the afternoon, and later the charge went up to a ‘tanner’ (or sixpence, the equivalent of 2.5p).

These days, a deckchair will set you back £2 for the day.

Back then, the Hinks family also hired out rowing boats on the canoe lake, which they built themselves and then spent the winter months maintaining and repairing.

These went by the board in the 1970s when, as Keith explains, “the age of the inflatable came in”.

That was when people began taking their own dinghys and li-los on holiday.

“We’ve seen a lot of changes in the holiday business over the years, and people wanting different things, so it’s been a case of adapting wherever we could”.

In 1973, when he was 27, Keith became a junior partner in the Hinks business, and when his Uncle Ted died in the 1980s, he was more than happy to take over, although still with the assistance of his mother and  the redoubtable Aunt Ena, who worked until she was 77.

But now he’s 70 himself and sees things differently.  In fact he says:  “I can’t see myself ever finishing – it will be a sad day if ever I have to”.

The only concession he makes to his age is that he now takes two days a week off, and works five instead of seven.

His nephew John Abbott, who’s worked with him for 30 years and is in line to become fourth generation of the business, often encourages his uncle to take it easy but Keith says:  “I can’t do that – if I see a queue at the tea hut, I can’t just sit around – I have to get in there!” 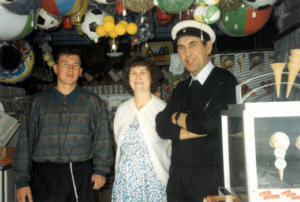 The thing is that what other people see as hard work, Keith regards as simply a way of life that he loves.

And he’s appreciated it even more since the fateful day in May 2002 when he suffered a serious heart attack on his way to the bank and ended up in intensive care for two weeks.

“John really proved himself that weekend,” he recalls.  “It was the Mayday holiday and he just took care of everything, got it all under way.

“You tend to think nobody else can do your job, but John is a great lad and I’m lucky to have him”.

The heart attack was a wake-up call for Keith in many ways.  Always a heavy smoker – 40 cigarettes a day until he switched to a pipe and then used up to an ounce of tobacco a day – he cut it out from that day on.

Confined to home for months as he waited for a stent to be fitted  at the Royal Sussex Hospital, he was thoroughly miserable and missing his life at the beach.

“I’m sure I drove John mad, constantly ringing up to check on things” he laughs.

Finally, John agreed to drive him to the beach every day – on the understanding he sat on a stool in the tea hut and didn’t move!

After his surgery, doctors tried to encourage Keith to join a support group with other heart attack patients – but he wasn’t interested.

“I didn’t want to go somewhere that people are talking about their illness all the time” he says.  “I just wanted to get back into my normal life and carry on enjoying it.

“OK, I know I’ve had a heart attack and I’ve got to be sensible, but there aren’t many people who can say they thoroughly enjoy their work and their life – and to me, that’s got to be more important for your health”.

Keith also tries to avoid undue worry, as he believes a further reason for his heart attack was the stress he suffered after the council ordered the removal of 25 of Hinks beach huts for health and safety reasons, following cliff falls further along the coast at Shanklin in the bad storms of 2001.

With no compensation offered, the action left the business with just 13 of its original 38 huts, leaving an obvious gap in income.

“It was certainly a bad day for us but you do survive these things” he says. 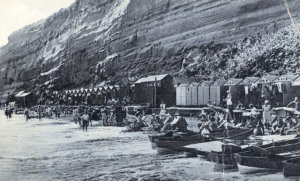 One of the ways the business has survived is to run the tea hut all year round, rather than just for the short summer season.

The revetments that were put in at Lake have created a popular level walk that now attracts local families, walkers and cyclists as well as holidaymakers, and keeps the area alive 12 months of the year.

“What has also helped to extend the season is the coach parties we get, which bring people right up to Christmas and then again from early in the year”.

This means there’s enough work for Keith to spend five days a week at the tea hut, whilst John – along with his 13 year-old son Harleigh – take care of the maintenance work.

With no wife or children of his own, Keith takes particular pride in young Harleigh, in whom he sees a reflection of his younger self.

“I never married because with my way of life, it was always too easy for me” he laughs. “I used to pick up girls just for a fortnight and didn’t really want to be tied down!”

Nowadays, though, he loves spending time with John and his young family.

An avid angler, President and life member of the Sandown and Lake Angling Club, Keith enjoys taking Harleigh fishing most Saturday evenings, down at the pier, where they angle for dogfish, plaice, skate and mackerel.

He’s also more than happy to play childminder to John and Michelle’s eight year-old twin boys, and he goes on holiday with the family.

Much as they love Sandown beach, he admits that they usually take off for somewhere a bit more exotic such as Lanzarote or Tunisia.

But Keith is always glad to get back onto Island soil, and says:  “I think the bucket and spade holiday will come round again.  In beautiful weather, I reckon there is no finer place to be – and I feel lucky to be a part of it”.