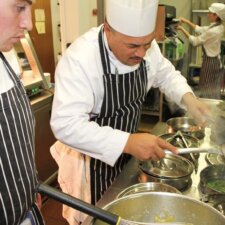 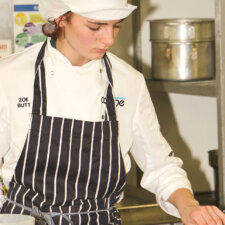 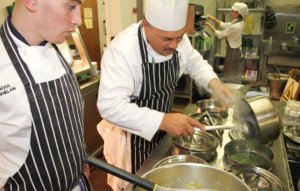 The Isle of Wight College Catering Department has every right to feel proud of its recent achievements. It has been given a Royal seal of approval, as well as providing chefs on an array of super yachts. So when it comes to preparation, cooking and serving food, it is probably fair to say – as the old adage goes – it really has been ‘the proof of the pudding.’

Paul Buckland, himself a former chef, is head of hospitality at the IW College catering department. He has been at the college nearly 14 years and began as a food prep lecturer.

He gave Island Life an insight into the range of catering courses offered by the college, and revealed how chefs and caterers who have graduated are now displaying their expertise all around the world.

Paul said: “As one of the major industries, catering is naturally big business on the island, and it fair to say qualifications have changed over the years. Although our full time curriculum is based around the kitchen and the restaurant, there are many other things that we do like assessing adults in the workplace.

“We work closely with a lot of employers, and students are out there in the workplace gaining invaluable experience.”

One course that has become particularly popular has been developed in conjunction with the Cowes-based United Kingdom Sailing Academy (UKSA). Paul explained: “Over the last few years we have run a course with UKSA, which trains people for the super yacht industry.

“That has now filtered worldwide as there is only one other provider of super yacht chef courses in the world. We keep in touch with some of the students who have graduated from the college through ‘Facebook’ and some of the yachts they are working on are incredible.

“We run the super yacht chef course four or five times a year, and the students spend a week with us and three weeks with UKSA. We are putting around 40 to 50 through that course each year. The students are all over the world, and the course has attracted people from all over Europe and as far away as Bermuda, although quite a lot do come from the Island. Many are people who have decided to have a complete career change. For example one person who did the course was a chief executive of a travel company.” 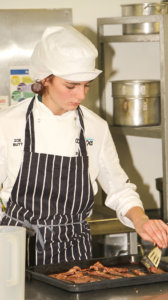 He continued: “We have that end of the spectrum; then we have the 16 to 19 year olds and also 14 to 16 year olds who come to college to do young apprenticeship courses a couple of days a week. They can choose to do a young apprenticeship qualification as opposed to five GCSEs. There are other options for 14 to 16 year olds who study an NVQ at college. The college restaurant is open to the public, providing more essential experience for students, who must cook in a realistic working environment and cannot pass their course unless they have done so.

There are different levels of qualification from entry, to levels one, two and three, and the menu and style of service change throughout the week to meet the needs of the students. For example on Thursdays themed evenings are organised, predominantly aimed at level three students, who need the higher end of skills and expertise. Students also undertake outside catering functions including weddings, while a wide range of work experience can embrace such top events as the Open Golf Championship or Royal Ascot.

“We have hundreds of students because of all the adult provision we do. They are spread far and wide, including working in the restaurants and hotels across the Island,” Paul said. The Royal approval came from the Princess Royal herself on a recent visit to the Island to open the new Isle of Wight College F6rm.

Paul revealed: “Students under supervision made a range of small canapés themed around an afternoon tea, and we used all Island produce for all of the dishes. Princess Anne actually asked if she could take some away with her in the helicopter to eat on the way home. Her close protection officer said it was the first time she had ever asked to take food away, so that was a real accolade.”

The one dish that everyone was left talking about was a Lavender Brulee using the lavender out of the college garden. There were also mini lemon meringue pies, mini tartlets, and scones with Calbourne clotted cream. The college principal has subsequently received a complementary letter from Buckingham Palace.  Clearly food fit for a Princess.