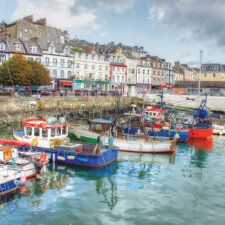 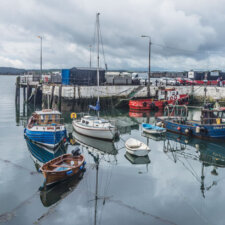 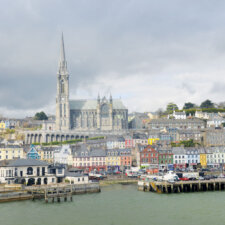 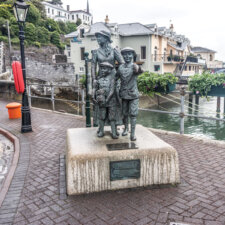 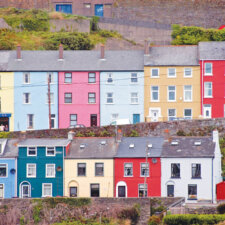 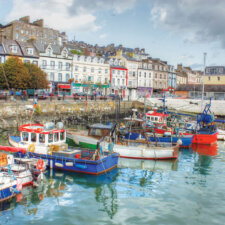 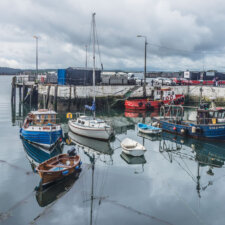 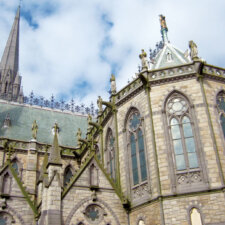 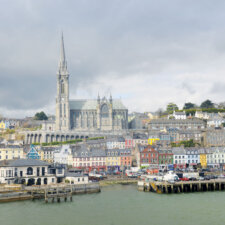 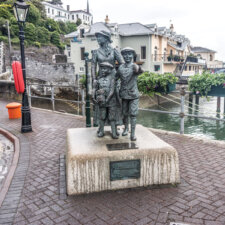 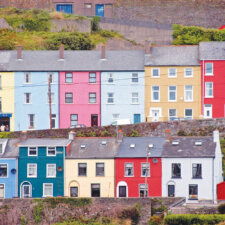 It was just a few years ago that I set foot on Irish soil for the first time. My late brother-in-law had suggested that I should experience the special fascination of Ireland and the Irish people, and without further ado, I left all the arrangements to him. To my surprise, he was able to secure four places, to include our wives, on a maiden voyage of one of the latest American cruise liners, offering a four day cruise from Southampton to the Port of Cobh and return.

The weather was not kind to us, and we left Southampton under very gloomy skies with much rain, and sadly we were hardly able to venture up onto the upper decks during the whole four-day cruise. This did not in any way distract from our enjoyment of this brief experience of Ireland, though, and as the ship approached the Port of Cobh and then on into the harbour, there was an eerie mist over the landscape that made me feel excited at the prospect of finally visiting this magical land.

As we docked, there was an option to either disembark until the ship’s departure at 6pm and venture as far as was possible within southern Ireland, or remain on board to see a Riverdance Show.  I was keen to venture, and we wasted no time in leaving the ship, to be greeted by several beautifully dressed young ladies in Irish traditional costume shaking hands and welcoming us to their country. We made our way through the town to the station and my late brother-in-law was keen to see the museum because of the local links with the Titanic, this having been the last port of call before the ship’s fated departure for its last voyage to America on 11th April 1912.

I decided to look into taking a train to Cork but being a Sunday I was informed it would be a limited timetable.  It was as I approached the train station in Cobh and looked around at the few local characters standing on the platform and at the ticket office, that I realised I had truly arrived in Ireland.

The ticket office official greeted me with a large smile and welcome to Ireland and enquired where I would like to travel to, I responded by requesting four return tickets to Cork and I couldn’t  possibly have anticipated the response that was to follow: “How important is it to you that you return to Cobh today as it is not certain that there will be a return train”. I couldn’t quite get my head around the statement of “not certain” and when I asked for an explanation, he pointed out that being a Sunday the train driver would go to the local public house for his lunch and drinks and it would entirely depend on the driver whether he would return to the train to take us back to Cobh!

Therefore no guarantees could be given – but despite this I decided to chance four return tickets in the hope that he would be bringing the train back. It was at this moment in my life that I had a flashback to a film staring John Wayne entitled “The Quiet Man” and if you have never seen it I would urge you to experience the characters of the Irish people. The journey through the countryside was picturesque, despite the very dull and wet weather, but clearly would have offered many photo opportunities on a brighter sunny day.

In order not to miss our 6pm departure from the Port of Cobh we allowed enough time to look around the shops and time permitting, a local public house to sample a pint of Irish Guinness.  Cork offers plenty of history, including a fort built almost 400 years ago and then replaced in 1624 by Oliver Cromwell, as well as a Franciscan Well Brewery which has been substantially renovated. The brewery is named after the site where once a Franciscan Monastery stood. This is for the connoisseur of beer drinkers, or you can choose from a range of ales, stout and wheat beers as well as lager. Cork also has a French neo-Gothic Cathedral named St. Fin Barre’s which was established as a Monastery in the 7th century and today houses a wealth of paintings, sculptures and other historic artefacts. In addition the old Customs House is now the Cork Municipal Art Gallery, with a display of paintings, sculptures and literary examples and representing the home of many beloved Irish writers such as Samuel Beckett, Yates and Elizabeth Bowen.

Our final stop was at a tiny, typical backstreet public house. It was well patronised despite it being a Sunday afternoon and as I approached the bar to order four pints of Guinness I enquired of the hearty bartender if this was the “real stuff”? He laughed and said “Indeed, to be sure, to be sure Sir”. There was a slight elderly gentleman tucked away on a corner bar stool who looked to be in his mid-80s, dressed in a well-worn tweed suit with waistcoat, and in a broad Irish accent he said to me “You are from England – would you like to hear some stories about the Titanic, as I lost relatives on the ship”.  The discussion was fascinating and I rewarded him with a pint of Guinness.  Apparently the ship itself had left Cobh Harbour and dropped anchor for the very last time at Roch’s Point at the harbour entrance.  Less than two hours later, she had retrieved her anchor and was sailing towards America, having picked up a further 123 passengers who were brought to the ship from the Port of Cobh.  Although it’s well documented elsewhere, this gentleman was aware of the seven lucky passengers who disembarked at Cobh, including a priest known as Father Frances Browne and the Odel family who escaped the tragic fate of this ship’s voyage.

Our time had arrived to return to the Port of Cobh, so we made our way to Cork Station and, it was little surprise to be informed at the ticket office that the driver had not returned and that the train would not be running back to Cobh Harbour.  For a moment I thought we might be stranded in Cork as the train journey alone was 30 minutes and it would mean having to seek some other form of transport to return.  I was directed to the taxi rank but there were no cars available other than one with a gentleman leaning against the side of his seven-seater people carrier, enjoying his cigarette.  At this stage two other ladies approached us, concerned about their own plight to return to the ship so I politely asked him if he could possibly take us, by now six people, to Cobh Harbour to return to our ship as time was becoming of the essence.  I was also wondering what the cost would be for this trip.  He replied; “For sure, but I have no idea what I can charge you for this trip as normally people return by train”, I responded quickly and asked “how would £50.00 suit you?”.  He quipped, “For sure, sir, and for that money I will give you a tour of Cobh Cathedral also!”

As we approached this wonderful edifice it was as if the town were dominated by this  grand Roman Catholic Cathedral sitting high on the hillside above Cobh – and certainly it was well worth the visit. The Cathedral has nearly 2,500 pipes and one of the largest bells, weighing some three tons, suspended 200 feet above the ground.

Finally, we returned to our ship having learnt so much in such a short time, and retaining in our minds a special image of Ireland and its wonderful people.