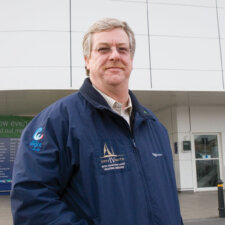 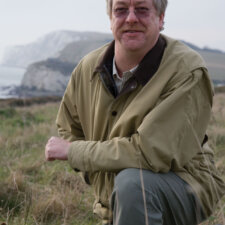 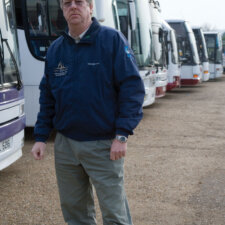 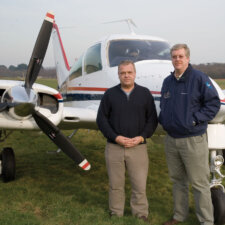 Council leader Andy Sutton hated school, made his mark in the Army – and now has a grand vision for the Isle of Wight.  What’s in it?  We went to find out.

Council leader Andy Sutton was born in Leeds in 1953, the elder of two children. His parents were both artists who met at art college and his mother still lives in Yorkshire, Andy’s father died when he was 17. His mother, now in her 70s, is still working and involved with the Yorkshire Art Society.

“Both my parents were artists, and yet both my sister and myself ended up working in government. I was not interested in art.”

Andy’s sister, 13 years his junior, works for the DSS on the mainland.

“It’s strange,” says Andy, “that both my parents were artists, and yet both my sister and myself ended up working in government. I was not interested in art.

Andy describes his upbringing as pretty strict and old-fashioned, with a mother who ruled the roost. He regularly got the “odd clip round the ear” which he reckons might have done him some good. Andy puts his success in life down to a good Yorkshire upbringing … and a good healthy Yorkshire diet.

He left his comprehensive school at 15 with no qualifications, and admits to having hated his time in class.

“I didn’t enjoy those years at all” he says. “I left at 15 to work as a vehicle mechanic apprentice for Wallace Arnold, in Leeds. I really enjoyed that, and in a strange way it got me back into education. Within a year I was in the top technical grade at Leeds College. However if I’m honest I didn’t like getting my hands dirty, so I began looking around, and this is when the armed forces caught my attention.”

Andy joined the Army at 17 because, he says, he didn’t like the monotony of the 9 to 5 routine. He was ambitious and loved a challenge, which might explain why he made his way up the ranks to become the youngest Sergeant in the Royal Corps of Transport, at only 24. 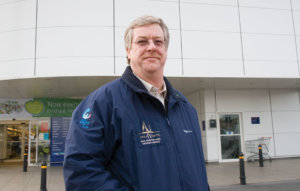 “Taking them at this age was hard work, although I actually enjoyed doing it. I think the problem with school was it never fired my imagination, whereas the Army did”.

During his Army career, Andy did tours in Northern Ireland, and then spent 14 of his 23 years service in Germany, where he taught in nuclear, chemical and biological warfare. He also served in Warminster, Wiltshire, where he was a Platoon Weapons Instructor.

By the time he retired from the Army, he’d risen to the rank of Regimental Sergeant Major. When he left in 1993, he opted for another uniform and worked as an officer in the prison service at Parkhurst. “It was not the most enjoyable time of my life,” he recalls, “but it kept the shekels coming in.”

Andy had first come to the Isle of Wight during his Army days, when he worked on the range at Porchfield, and it was here that he met his second wife Maureen.

So was it love at first sight? “Yes it was” he says, “and that goes for the Island as well I suppose.” 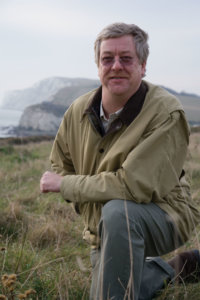 Andy and his wife were married at Freshwater. He has two daughters from his first marriage, both of whom live on the mainland, one working in the prison service and the other who is happy as a full-time mum of two.

In 2001 when Andy became leader of the opposition, he reduced his hours at Parkhurst to 19 hours a week, and spent the rest of the time with his consultancy company, doing exams with the Development and Improvement Agency.

“That flourished for me, as I ended up going round working with the Audit Commission and with the Improvement Development Agency inspecting and reviewing other authorities. This gave me a good knowledge base, as I visited places from the North of England right down to the South Coast.”

It was this experience that stoked Andy’s interest in politics, and led to his success in the 1999 by-election when he took over from David Holmes.

”I also stood in the 2001 election, won my seat, but unfortunately did not gain overall control of the council, so again I became Leader of the Opposition. At this time we concentrated all our efforts on the Parliamentary seat, and in 2001 we won it, which was a fantastic result. I spent the next four years as leader of the opposition, keeping a group of 13 councillors together.”

This must have been a testing time for him?

“It was very frustrating,” he said, “to see things going wrong, but not being listened to. A good example was the Pop Festival, which we tried to stop the council from running. This, as we all know, ended up losing nearly £400,000. This should have gone to the private sector from the start. Those were an extremely frustrating four years.”

But he says that far from making him want to throw in the towel, the sheer frustration increased his determination to fight for change.

“Actually what the administration did by ignoring me, was to give me a four year planning period to ensure that the Island council changed control, so Islanders could have a good council, delivering services that people wanted, and also offering value for money.”

So how did the Tories manage their landslide victory in the 2005 election?

“I had been working very closely with the MP Andrew Turner and a small select group of people to ensure we were elected” says Andy. 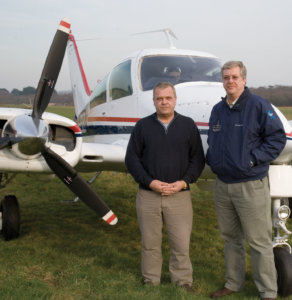 “I had been lambasted in the council chamber three years before in 2002 for advertising in the County Press for people who would come and make a real difference and become Conservative councillors. Two and a half years from the election I had 35 candidates and 13 sitting councillors working together and planning the campaigns, going round knocking on doors, working out the manifesto.”

When Andy arrived for his first day as Council Leader he says he was aware many council employees were concerned about their jobs.

“I’m quite keen to out-source services if I can get a better value for money price for the taxpayer” he says. “There were a lot of people within the Council it was vital to look at output. We stopped a lot of recruitment right from day one, and if you look at the Council job section now in the County Press you’ll notice it is greatly reduced.”

“Also within a month we changed the redundancy policy. We are the only local authority in the whole of the UK to only give statutory redundancy payments. People who have been in the same job for many years either have to respond to the new opportunities, or they go elsewhere and look for a another comfort zone, maybe another local authority that isn’t modernising and moving at the pace we are.”

Andy reckons his previous experience of visiting successful councils and seeing how they operate, is now starting to pay dividends, with cost savings of 5 per-cent even before the end of his first financial year.

“The previous council did not communicate between departments and it did not communicate with the electorate,” says Andy. “This is why we have already hosted meetings across the Island, talking about how the Council is going to change, and the fact that we are going to keep people up-to-date with what’s happening.”

“I see the Town Parish Councils playing a bigger role in the future They are an important part of the overall picture, and powers are slowly moving back to these local Parish Councils, which, as a born localist, I am happy about.”

Andy is also keen to curb the ever-increasing development on the Island. He said “Before we build all these houses that Mr Prescott wants built, we have to ensure we have the infrastructure in place to service them – the schools, the nurses and doctors, the decent roads and sewage systems.

“The other day I had calls from residents in Freshwater complaining that they had raw sewage running through their gardens. This is a good example of over-development, and it has to be controlled”.

Two of the main policies that the Conservatives promoted very heavily were on bus fares and parking fees – the £1 bus fare, and a yearly parking permit. With many residents complaining that these are slow in coming, are they ever going to happen?

“It’s still our intention to keep this promise, we have already introduced free bus (Southern Vectis and Wight Bus) and rail (Island Line) travel for the over 60’s, and in addition to this we have introduced a 50p bus fare for the under 19’s in full time education.” 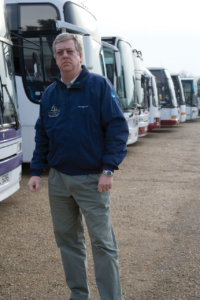 Tourism is a major area of Andy’s concern and he has some pretty stringent views on what needs to be done. Coaches, he reckons, do not do the Island’s roads any good.

“They put absolutely nothing into the Island economy, nothing, apart from damaging our roads. When a coach party goes out for the day, they spend very little – in fact almost nothing. How does this help the Island?”

So if the coaches go, what replaces them and what do the coaching hotels do?

“We know there is a demand for walking and cycling, because we have all the statistics. There’s also clear evidence when you look at all the data that the best hotels have got an 85 per-cent occupancy rate all year round, and the lower hotels have not. To some degree the commercial market will drive that.

“We need to look at a fairer charging policy for coaches coming over, so the local community and the local authority get a bigger take from that market. We will look at increasing the coach parking charges. We want to shape the market, and go for higher value tourism.

“We also need to extend the season – it’s essential for the Island business community that we do this. It’s about encouraging the pounds out of the pockets of the visitors who come here.

“We will never get rid of coaches, but we can shape the bucket and spade brigade, and turn the Island’s tourism on its head. We need to shape the battle ground, as I would say with my military background.”