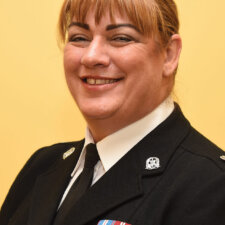 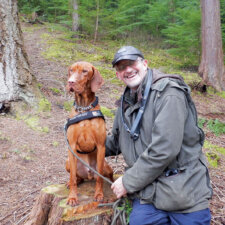 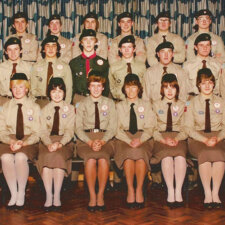 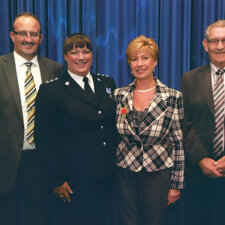 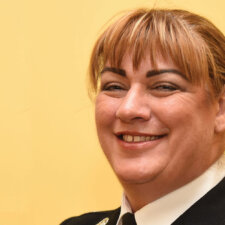 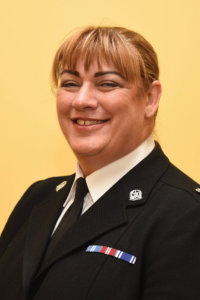 After spending 26 years of her police career climbing the ranks on the mainland, Superintendent Sarah Jackson returned to her Island roots in 2015 to take up her most recent promotion to District Commander – effectively the Island’s highest-ranking officer, and the first one for many years to actually live here.

Here she tells us how moving back across the Solent proved tougher than she could ever have imagined – and describes how she gradually settled into the job and is now loving it.

The world of the 1960s local ‘Bobby’, as popularised by the TV series Heartbeat, is one that’s very familiar to Sarah Jackson – because she effectively grew up in it.

As the daughter of an Island PC, Sarah made her entrance to the world in 1967 at a police house in Newport, and jokes: “Maybe my future was written in the stars!”

Not that Sarah had any early ambitions to follow her father into the Force – she was too busy enjoying an active and outdoorsy childhood like many of her Island friends – spending idyllic summers on the beach, cycling and camping.

But the signs of her future path were there, as she showed an early willingness to roll up her sleeves and get involved in community activities.

She threw herself into the Girl Guides, piling up badges and awards, and then at 16 joined the Venture Scouts, which involved much more in the way of leadership and community work.

She achieved Queens Guide and Queens Scout Awards, represented the Island at an International Camp, and took part in big fund-raising challenges such as the Trans Wight Walk.

At Medina High School, she was a House Captain, played on the netball team and was a great swimmer.

All of which probably makes her sound rather like a schoolgirl saint!

She laughs at the thought and says:  “I’m not saying I was a Goody Two Shoes, but I suppose that having a dad as a police officer meant I had to make sure I didn’t embarrass him”.

Sarah’s father John (better-known as ‘Jock’) was not just the local beat policeman, but was also heavily involved with the local football scene, and managed Newport’s First Team until he retired.

“He was very well known both in policing and football” says Sarah, “so there was no chance of me not being known.”

Her mum Adrienne, meanwhile, was also in a high-profile community role, as a practice nurse in Ryde.

When it came to her own career path, the 18 year-old Sarah was still unsure.

She had applied to go to Uni but ultimately didn’t get the A-level grades she needed. 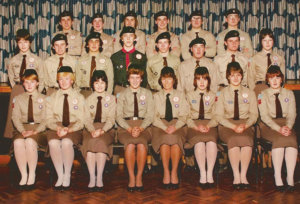 “I’m quite a practical person anyway” she says, “so I was keen to get right into the workplace”.

She did that by getting a place on a retail management course with supermarket giant Sainsbury, which took her off the Island for the first time and into two years of working in Surrey.

It was fine for a while and added to her skills, but ultimately Sarah decided that retail wasn’t going to be the career path for her, and returned to the Island to consider her next steps.

She took a local job and began to toy with the idea of following her dad into the police force.  “I realised it would be a good way of bringing together some of the community skills I’d already developed” she says.

Naturally her father was delighted when she was accepted into the Force even though it meant her leaving the Island and heading back to the mainland – for what turned out to be over a quarter of a century.

After qualifying, her first posting was to Lymington in the New Forest, a rural patch with certain similarities to the Island environment she’d left behind.

However, 18 months later, she transferred to the much faster-paced Southampton Central station, where she spent five years, covering a whole range of police work.

Then it was to Ashford in Kent, where Sarah was promoted to Sergeant and was able to bring her previous leadership skills into play in a training role, with particular responsibility for training new constables.

During her three years there she says she particularly enjoyed the process of seeing raw recruits being turned into fully-fledged police officers.

“Nowadays as I go around the county, I keep bumping into officers and realising that I trained them 20 years ago” she says.  “It’s a really satisfying feeling to have first met them as ordinary members of the public and then to catch up with where they are and what they’re doing now”.

From Ashford, she was transferred back to Hampshire and worked as Patrol Sergeant at Aldershot, then as Custody sergeant, where she began to get involved with the then-emerging “Best Value” movement, looking at working methods and striving to improve them.

Her experience in this arena led to a further change of role, and a posting to HQ in Winchester as Best Value Review Sergeant. 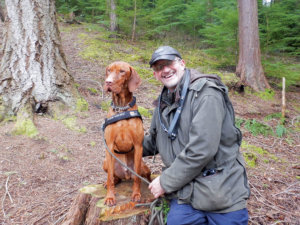 Then, her ever-broadening experience resulted in a further promotion in 2003 to Police Inspector, which saw her taking charge of custody and criminal justice matters at Aldershot.

In 2006 she was promoted to Chief Inspector responsible for Initial Training at the force’s Southern Support and Training HQ is Southampton. Two years later, she was appointed District Chief Inspector for Hart District in North Hampshire, and a further two years on, in 2010, took over as Chief Inspector of Hart and Rushmoor Districts.

It had certainly been a rapid career trajectory, and by 2012, Sarah was looking to the next obvious career step to Superintendent level – though that wasn’t to come so easily.

With refreshing candour, Sarah admits that she failed the selection process twice, in 2012 and 2013 – but far from settling at the undoubtedly high level she had already reached, she approached the barred gate with her usual drive and gusto.

“I realised that I’d been a District Commander for five years and probably needed to do something else and see something different” she says.

Which she promptly did, by taking on an appointment as Staff Officer – a kind of professional  PA – to the Chief Constable in Winchester.

“Every day was different, and it gave me a real insight into what Chief Officers have to do” says Sarah.

And far from seeing the job just as a stepping stone to her next promotion, she says:  “I’ve always taken the view that I’ll do the best job I can, in whatever job I am doing today – so no, it wasn’t all just about climbing the career ladder”.

However, the experience certainly helped her to make the next step because when she went through the Superintendent selection process again in August 2014, she was successful.

“I suppose you could say it was a case of third time lucky for me!” she says.

At that time, the Chief Constable was focusing strongly on leadership in the constabulary, and for Sarah that proved to be a perfect working fit.

“Having an empowering leadership style is so important “ she says.  “It is a delicate balance to tread in policing, because we need to be very directive at certain times, but more collaborative and cooperative at others”.

And that’s a philosophy she brought to the Island when she returned to home turf in 2015 as district commander in charge of around 180 staff and officers plus over 25 Specials and volunteers.

“Here, my job is to make sure officers and staff can do their job with the minimum number of factors getting in the way” she says. 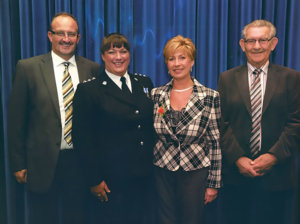 Part of the balancing act she has to perform is that while being part of the larger organisation of Hampshire Police, she’s closely identified as representing the Island community with all its quirks and individuality.

“I have to consider how I can connect Hampshire to the Isle of Wight in a way that works for the Island, and that always comes down to partnership – constantly looking at ways we can get people and groups to work together for the benefit of the whole community”.

Sarah admits though that coming back to the Island wasn’t all plain sailing.  She admits she even hesitated for a few months before agreeing to take up the appointment.

“Having worked on the mainland for 26 years, I knew a lot of people over there and when I came back here, I didn’t have that.  It was something I’d never even considered.

“Because I’ve always loved the Island and thought of it as home, I assumed I’d settle back here more quickly and easily than I actually did”.

She reckons it actually took about a year before she and her husband Alan, a retired police officer from Surrey, began to enjoy their new life on the Island.

It helped that they took a ‘staycation’ here, re-discovering some of the places Sarah loved as a child.  They also started walking and cycling, have acquired a “mad as a box of frogs” pet Hungarian Vizla dog called Duggie, and are enjoying doing up their home and garden.

“Now when we go out for walks in the woods just by our house, we can’t believe how lucky we are to live here” she says.

Sarah also acknowledges that she’s lucky to be working at a time when women have never been represented at such high levels in the police service.

“When I joined, we didn’t have women at such senior levels in Hampshire. That has changed hugely over the years and in fact the two most senior officers in Hampshire are women.” She says, “I feel it’s important for those of us in senior positions to help and encourage others through advice and support.  As women we can be quite self-limiting at times, which is why strong support networks can really help build confidence and recognising ‘it is not just me’!”

Despite her success, Sarah seems remarkably easy with revealing some of her own vulnerabilities:

“We all have things we don’t do so well, and everyone has lapses in confidence at times,” she admits, “but as I always say, that shouldn’t stop you from being sure who you are and doing what’s important to you.”