Home|Features, Sport|Hole lot of fun at golf day!
Previous Next 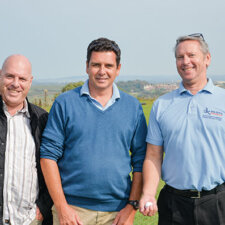 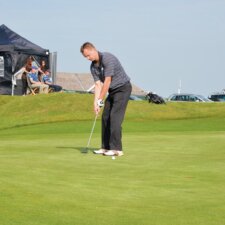 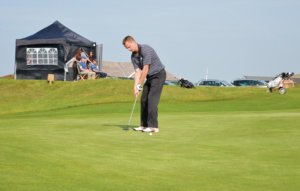 Tom Axford, the head chef of Fighting Cocks in Newchurch, was the overall winner on the day, with 68 taking part.

Part time salesman, John Kennedy, of Medina Foods was the Director of Golf.

Beaulieu House has 10 bedrooms for residential and short term breaks for children and young people with severe learning difficulties and complex health needs, some of which are life-limiting. The registered charity, Beaulieu Respite is made up of parents and volunteers that supports the work of Beaulieu House, for example, by raising much needed additional funds.

Isle of Wight Youth Trust is a charitable, independent and professional organisation offering counselling, advice, information and support services to young people aged 25 and under, and in some cases their parents and carers.

Beaulieu House Trustee and Fund-raiser Tony Wake said: “I would like to thank Steve Ross, John Kennedy and Cory Williams for choosing us to be one of the two charities for the day. It raised the profile of our charity and raised a great deal of money for the local cause”.

Aimee Steward, Fund-raiser for Isle of Wight Youth Trust, said: “It was great to be approached by Steve and the team at Medina Foods. Without the support of local businesses we simply wouldn’t be able to support children and young people on the Isle of Wight.”

Medina Foodservice managing director Steve Ross won the Good Effort award. He said: “You couldn’t have asked for better weather and it was great fun. It was actually only my second ever game of golf, so I think I didn’t do too badly!”

Operations Director, Cory Williams added: “We have raised £850 so far for the two charities and we are also running an on going blind auction so we are hoping to double that figure.”