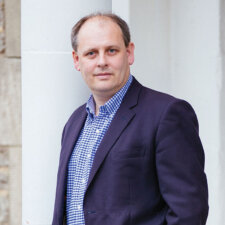 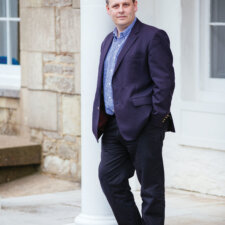 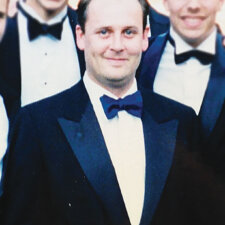 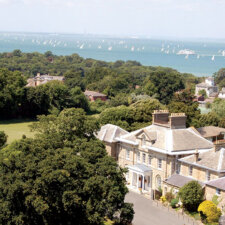 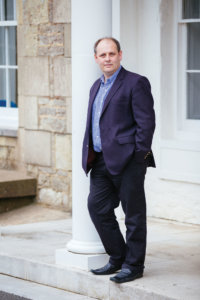 As private schools go, you might say that Ryde School is a one-off. Strongly grounded in the community, it teaches that academic qualifications are not in fact the be-all and end-all of a successful education. The man who’s been driving the school’s direction for the past four years, Mark Waldron, tells us about his vision for the future – and describes his own educational journey.

As a Yorkshire grammar school boy in the 1980s, Mark Waldron was quite clear what he wanted to be: the British Foreign Secretary. Rather a weighty ambition for a young lad who was just discovering the joys of politics!

Later on, he changed his mind as many teenagers do – but as he reflects now, the crucial thing was that he was never mocked, put down or dismissed as too big for his boots. In fact, his geography teacher Mrs Barber took him so seriously that she offered positive suggestions that might take him in the direction of his political dream.

You can’t help but feel that this was a pivotal experience for the boy who, 30 years later, is now encouraging other youngsters to find and follow their own unique path.

It comes out when he talks about what inspires him most as head of Ryde School:

“Since being here I’ve come to recognise that it’s not all about academic success and good exam grades” he says.

“I’m sure my 22 year-old self would have been very sceptical of this view, but I now see that a person’s happiness, self-confidence and wellbeing are critical to life chances and success. That’s the reason why we focus so strongly on mindset and coaching at school, and encourage lots of extra-curricular activity, not just the traditional academic subjects”.

It also means that Mark is just as delighted by the success of every GCSE pupil who achieves better-than-expected grades and then takes them straight out into the world of work, as he is by the more academically-inclined ones who head off to Oxford and Cambridge every year.

As he says, it’s about helping young people to discover and value who they are, especially in an increasingly tough 21st century world of social media comparisons, and “intense competition with half of the world” when it comes to work, study and business opportunities.

So what was the path that led Mark Waldron from aspiring Foreign Secretary to head of an independent school that prides itself on being “an Island school with global vision”?

Though he admits that he rarely goes there, these days, Mark says that Yorkshire is still very much ‘home’.

By that, he means that those classic Yorkshire values of straight-talking and a close sense of community, still run strongly through his veins.

He describes a happy childhood with his hard-working parents and sister Helen: his dad Phillip was self-employed with earlier generations from North Yorkshire farming stock, whilst mum Susan was from a more traditional working class background.

Mark was fortunate enough to be a pupil who went to what he describes as “a good northern state grammar school” in Halifax: the Crossley and Porter School, which was founded in 1864 as a Victorian orphanage and became a grammar school in 1944. 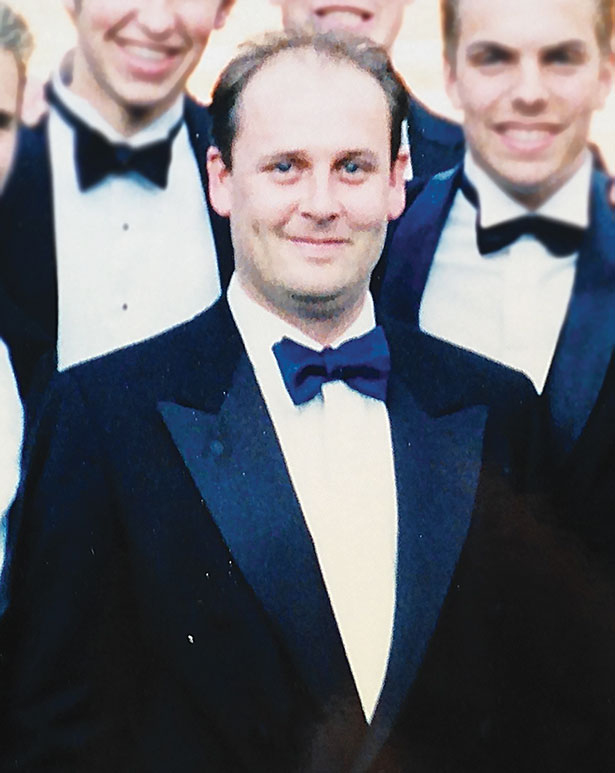 Unlike most areas of the UK which had ditched the 11-plus in favour of the comprehensive school system in the late 1960s, Halifax was one of a few areas that held on to the selective exam for 11 years-olds, along with its grammar schools – and still does to this day.

Not surprisingly, he remains a strong defender of the grammar school system, and says he certainly wouldn’t be where he is today without it.

“The selective system draws pupils from a wide range of backgrounds, and when I was at school, we had pupils from council estates and the wealthiest of families. It’s rare to get that in neighbourhood comprehensives, and I think that’s a shame”.

Unusually for that time, Mark’s school also organised exchange visits with schools in Halifax’s German twin town, Aachen. Going on one of these exchange trips was to have a strong effect on his developing self: “I think it normalised difference for me” he says.

Mark’s grammar school was his launchpad to Cambridge, where he studied history – the first person in his family ever to go to university.

Whilst he says his parents were always supportive of his education, and were excited when he went on to do A-levels, he adds that Cambridge put him into a world of which his family had no knowledge or experience.

His first teaching job took him still further into unknown worlds: the private Radley College in Oxfordshire was where he spent the first three years of his career, and he recalls it being “a big shock”.

“I thought I’d gone to a country house by mistake!” he jokes.

But it made him realise that one of the best things about teaching from his point of view was that “you can do it anywhere”.

Having already discovered his passion for travel and exploring other cultures, it was probably no surprise when Mark secured his next teaching job in Greece, in 1993.

Teaching history at the Campion School, an English-language private international school in Athens, literally took him a world away.

“I had a great time” he recalls, “but it was about as far removed from rural leafy Oxfordshire as you could get.

“During that time, it was just me in a classroom. The history department was a hut on the roof, and classes had to be cancelled if it rained!”

Two years later, he returned to Cambridge and a more conventional role as Head of History at The Leys day and boarding school.

Still only five years out of University, he threw himself not just into the head of department role, but also did drama and coached sports including water polo. After two years there, at the age of 28, he became a House Master, responsible for 60 boys aged 13-18.

“As I wasn’t that far away from their age, I was probably more of an older brother figure” he says.

Certainly it didn’t leave him much time for a social life outside of school circles – and now he says it’s probably part of the reason he remains single.

“Those years I spent at The Leys would have been the classic time of life when most people settle down and for me it didn’t happen.”

But the upside of that, he says, is that he has always had the freedom to indulge his passion for travel – and he’s used it to the full.

Taking advantage of the long school holidays every summer, he enjoys making what he calls ‘big trips’ to far-flung locations which have included North Korea, the wilds of Russia and rural Canada.

After nine hectic and enjoyable years at The Leys, he accepted a Deputy Headship at another independent school, Sherborne in Dorset.  And five years there took him to the age of 40, when he decided it was time for another overseas adventure.

That came with his appointment as Head of the English College in Prague, a 12-18 grammar school, predominantly for Czechs and with a strong liberal and democratic ethos.

“I like to go to quite distinct places” he says, “ones with a definite character all their own”.

Which was how, after four years in Prague, he came to apply for the headship here at Ryde on the Isle of Wight.

He may have travelled far and wide as an adult, but Mark says that he still retained fond memories of a Golden Rail holiday to Ventnor that his family took when he was aged eight – and when he came back to the Island for his interview at Ryde School four years ago, he discovered there was still that same “wholesome feeling” about the place.

“I have worked in a lot of independent schools but I had never before found one so grounded in the area that it’s from” he says.

“Fundamentally, the pupils still come from the Island and the Portsmouth area so there’s a strong sense of being rooted in the area”.

Around a quarter of Ryde’s pupils receive some level of bursary support, which adds to the wide range of family backgrounds it draws from.

“The diversity of parent background here is probably more broad than any school I have worked at” says Mark. “We have the children of gardeners, electricians and plumbers, people who teach in the State sector, businesspeople, entrepreneurs and health workers as well as the more traditional professional families”.

Around 10% of Ryde’s pupils are boarders from overseas, which Mark says “creates an ethnic diversity that we don’t otherwise tend to see on the Isle of Wight.”

This has often led to private exchange visits between pupils and their families, in addition to the organised exchanges the school runs with schools in France and Spain.

One of Mark’s big challenges at Ryde, he says, is to encourage the understanding that going to a good school is about more than achieving good academic grades.

It’s for this reason, among others, that Ryde School became in 2015 the first independent school in the UK to offer the IBCP, a 16+ International Baccalaureate route that combines professional and technical skills with an academic curriculum. In its first two years students have been offered both university places and employment at the end of their studies.

“When I first arrived on the Island I was amazed at the number of small businesses here – but I found that they cannot recruit because they don’t have the intellectual base.

“That’s where we have to be at the forefront of change and really promote the value of rigorous vocational education”.

Four years into the job at Ryde, the globetrotting head says: “If you’d told me 25 years ago that I would be on the Isle of Wight, I would have found that incredible, but now I can see myself settling here. It’s a beautiful place to live, and the school is really rooted in its community”.

“My job is to make sure everyone in the school feels that sense of security and belonging that living on the Island gives, but that they don’t feel confined or limited by it.

“There should be no block on aspiration or ambition and the Solent shouldn’t be seen as a a barrier.”

In fact Mark says he sees himself as a ‘bridge’ that stands between holding on to familiar values – and exploring a bigger vision beyond.

Clearly, that is a bridge he has certainly crossed several times himself.