Home|Interviews|Colin Green: Glass is class at Alum Bay
Previous Next 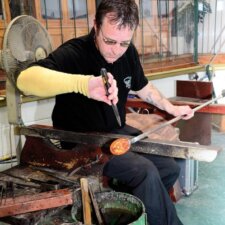 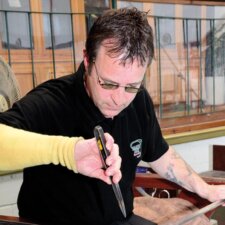 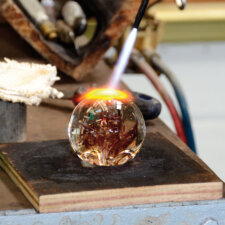 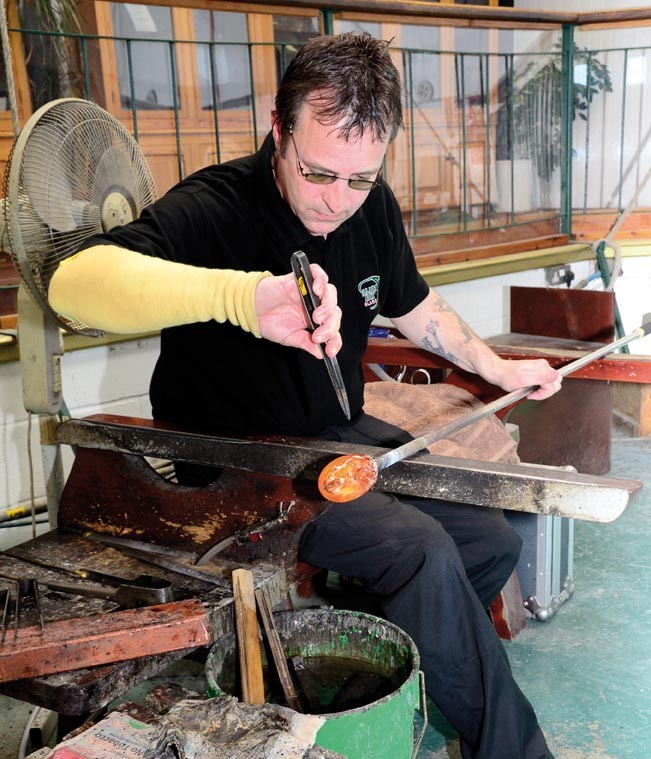 It is a fascinating work of art, and one that thousands of visitors stand and marvel at each year. Working in searing heat at the Alum Bay Glass studio, on the Needles Park site, Colin Green (left) and his team produce magnificent, eye-catching items that are now being snapped up worldwide.

Alum Bay Glass was founded in 1972, and Colin, 45, has been working for the company since 1987, following in a family tradition that was started by five of his uncles who were all in the glass industry.

One of the uncles, Jack Green was a renowned scientific glass maker, who later did more artistic work, and some of his pieces can be seen on display in the studio at Alum Bay. Colin said: “I am very proud of what my uncles did, although I never got any help from them.

“I was fascinated by what they did, and I remember when I was about 10 years old my uncle made a glass pig in a bottle, but it was very unusual in as much it was a pig inside a pig, inside a pig several times, in the bottle. He made it for my dad, who was a butcher in Totland, and it really fascinated me.”

Alum Bay Glass founder Michael Rayner taught Colin and the other members of staff the delicate art of glass making, and when Michael handed over the business to the Needles Park in 1997, Colin was left to take up the reins, along with Rob Adams, Steve Meakin, Dave Read and Luke Powell, along with new recruit Tommie Ford.

“It is quite a long learning process. You start by making paper weights and small animals, and then after about eight months you start glass blowing,” Colin explained. “But overall I would say it takes at least 10 years’ training to become an accomplished glass maker.

“The time it takes to make a piece depends on what it is, but if Rob or Steve were making vases all day they would make about five an hour.” 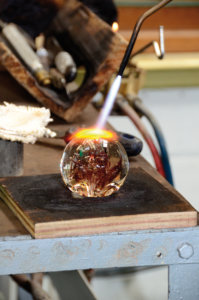 The glass articles come in an array of colours, which are produced from ground up glass, most of which is imported from New Zealand. That is added to the molten glass, making each item totally individual. There is something for everyone at the studio shop, with souvenirs ranging from £1 up to £200 for a set of gold leaf goblets.

“We get a lot of school trips coming through, so keeping prices low enables most people to go away with something, and it is all made on site,” said Colin. There are two furnaces on the studio floor, which are fired 24 hours a day for about 18 months before servicing. They generate a gas bill of around £600 a week, with the glass melting temperature 1,260 degrees Celsius and the working temperature 1,080 Celsius. Hardly surprising then that Colin and his colleagues are rarely seen in anything but tee-shirts and shorts.

One of Colin’s most prized pieces is the dagger handle he made for the 2010 film ‘Prince of Persia, Sands of Time’, which is also on show in the studio. He also made the glass Moto-Cross Championship trophies when the sport was held on land near Arreton.

The most popular pieces tend to be glass animals, and recently all items can be bought on line through www.alumbayglass.co.uk which allows traditional and bespoke pieces to be sold worldwide.

Colin said: “If people want to come along and talk to us, we can make virtually anything to order. We were once asked to put someone’s false teeth in a piece of glass. And if anyone has a piece of glass that has been broken if they bring it along we will do our best to repair it as perfect as possible.”