Dolores Clover: “Get me off this damn boat!”

Home|Interviews, On the water|Dolores Clover: “Get me off this damn boat!”
Previous Next

Dolores Clover: “Get me off this damn boat!” 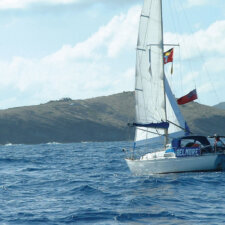 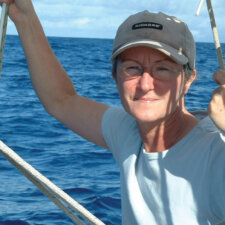 How solo sailor Dolores battled with the Atlantic.

She had never skippered a boat single handed in her life – or even had any inclination to take to the waves.  But after Dolores Clover’s 15 year-old son Seb sailed the Atlantic single-handed, she was determined to follow suit, just to experience what he had gone through.

It was a journey that took the 52 year-old mum to the limits of her endurance, and left her feeling she never wanted to board a boat again – “Not even the Queen Mary!” she says.

“Every day I wanted to get off the boat, but finally accepted that I wasn’t going to.  I sat there saying ‘I’m never, never, never getting on another boat as long as I live’,” she recalls.

“One hour out of the marina at Lanzarote, I sat down and cried and thought ‘What am I doing?’  It’s the most unnatural thing to do, to put yourself alone in a little boat with the intention of sailing for 3000 miles.  How stupid, how idiotic!  But then I reminded myself I was doing it to find out what it was like for Seb, because he did this and he was only 15”

Dolores, a tiny 5ft tall and weighing just seven stones, was prepared for her solo six week epic on the high seas by husband Ian, a yachtmaster ocean instructor in Ryde.  She received intensive sail training in the Solent and English Channel and studied celestial navigation, sea survival, diesel engine maintenance and VHF radio ashore before setting off for more training with Ian on the two-handed trip across Biscay, past Spain and Portugal and on to the Canaries.

But she says nothing could have prepared her for the sheer loneliness, the sea sickness, or the feelings of searing rage against the elements once she set sail.

There was also an initial hold-up when she had to turn back on the fifth day of the voyage and head for Tenerife because of impending bad weather.  Husband Ian, who kept in twice-daily contact with her by satellite phone (running up a £1,000-plus bill in the process) called in the early hours of the morning to warn of the weather conditions.

“I was totally fed up, because I was just starting to feel I was on my way” she says.  “I told Ian that if I had to go back to Tenerife, I probably wouldn’t want to start off  again, but he just said “see how you feel when you get there…” and by the time I reached Tenerife after about 30 hours, I had made up my mind I was going to cross the Atlantic!”

As it turned out, she ended up being stuck in Tenerife for a week with strong winds and engine trouble, and Ian flew out to help get her seaborne again.

Once on her way to Antigua, Dolores learned to survive on minimal sleep, napping for an hour at a time, and got used to basic rations that included cereals, pre-cooked rice mixed with water (which she learned to loathe) and tinned tuna, soup and corned beef. 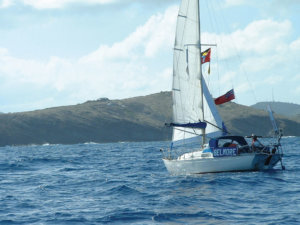 She was constantly scanning the horizon for other vessels and then calling them to check that they had seen her little 26-foot craft – which was bought specially for the journey because she had not wanted to sail in one of Ian’s larger boats.

“One of them was a Japanese boat with a lot of lights on, just before the Cape Verde Islands” she recalls.  “I called to check if they had seen me and they said yes we have seen you, but what is a little boat doing out here in the middle of the water, so far away?”

It was a question Dolores asked herself right up until the last glorious day when she finally sighted Antigua and Ian came out to meet her in a RIB.

Having done it was a huge triumph and Ian and Seb were naturally very proud.  Ian said:  “I was more concerned about being back home watching the weather for Dolores than I would have been doing the journey myself”.

Then he quipped: “On the bright side, at least there are no shoe shops in the Atlantic!”

And will the formidable Dolores be doing it again?  She says not – although every time Ian suggests selling the boat, she says no….