Judi Griffin: From a convent to the world cup skipper – Judi Griffin has seen it all

Home|Interviews|Judi Griffin: From a convent to the world cup skipper – Judi Griffin has seen it all
Previous Next

Judi Griffin: From a convent to the world cup skipper – Judi Griffin has seen it all 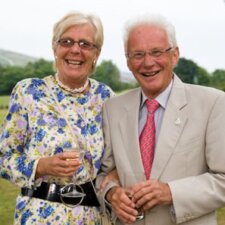 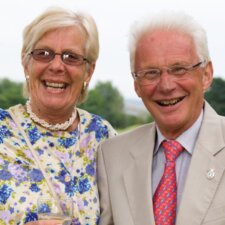 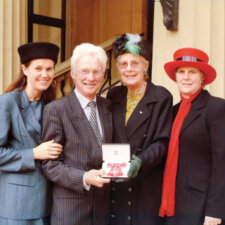 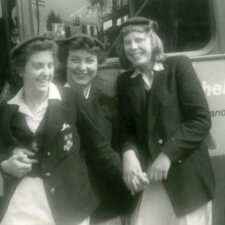 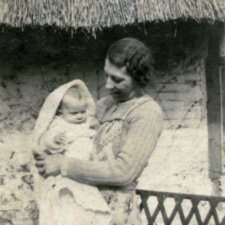 Judi came to the Island as a young girl, immediately fell in love with it, and that love has never wavered. After she spent a year in a convent in Paris as a teenager she had designs on travelling the world. Now, looking back, she is glad she opted to return to the Island, marry husband Dickie, and spend many happy years with the family at Briddlesford Lodge Farm.

Born Judi French in Chinnor, Oxfordshire during the Second World War, she and her family later moved back to Barking. She recalls: “We lived in the same road as Bobby Moore who was the same age as me.

“Our big sisters used to take us to the park in our buggies, and inevitably I played football with him. So of course I played my part in helping England win the World Cup. Unfortunately Bobby died some years ago, but if he was still around he would probably say to me ‘don’t be daft’!”

She continued: “My great grandparents came from all over the country and settled in the East End of London. My father’s grandfather was a Freeman of the City of London, and my mother Esther was a pianist. She had a remarkable talent for playing anything, picking the tune up after hearing it just once.

“She was particularly good at jazz, and in Chinnor she often entertained the troops, playing in the village hall for dances or concerts. She sometimes played the organ in church, and you always knew when she was playing because a bit of ‘boogie-woogie’ would creep in – much to the children’s amusement, and disapproval of grown-ups.”

Judi’s family moved to the Island in 1947, buying a bicycle shop in East Cowes. She smiled: “Our fortunes went up and down according to how many orders were in the shipyard. In the good times we had two shops, and lived in ‘the big house at the top of the hill.’ But not all the time. 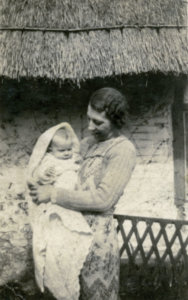 “Growing up in East Cowes was a sheer delight. I roamed the sea shore and played on the bomb sites with my brother, getting into scrapes and being told off because the bomb sites were extremely dangerous. We rode our bikes all over the Island, and a special treat was to ride through Brocks Copse to Woodside beach with my father, light a fire, boil a kettle and have a cup of tea. You didn’t have barbecues in those days.”

She and brother Bill attended St. Mary’s Catholic Primary School in Ryde. Bill left for boarding school and Judi attended Sandown Grammar School. When she was 15 her father had a stroke and was unable to run the shops, so she was taken out of school to help.

But her head teacher insisted she went back to school to take her ‘O’ levels, which enabled her to gain the qualifications required to get into the Civil Service, and day release entrance to Southampton Technical College to take ‘A’ levels.

Then at 16, Judi was sent to a convent in Paris. She said: “My parents wanted me to become a nun. I was terribly homesick, but fell in love with Paris. In the convent I lived with the nuns and worked in the school for my keep.

“I learnt embroidery as well as all my prayers and hymns in Latin and French. I was lonely, couldn’t speak a word of French, and had to abide by the rules of the convent, with a silence at certain times. I didn’t like the food so I used to creep down to the refectory at night and steal a piece of bread, because I knew the breakfast was put out the night before.

“During one ferry crossing after a trip home I met a girl from the Island who worked on a boat, moored on the River Seine. Suddenly my life changed. We had really good times when I ‘escaped’ from the convent. No longer did I want to obey my parents. It opened my eyes that there was a big world out there. I wanted to travel the world. I just loved it. I never wanted to become a nun – that was my parents’ idea.”

Judi is proud of her strong Catholic upbringing, saying: “One of my great-grandfathers was a farmer at Ingrave in Essex, and married Emma, whose family had worked for many generations at Ingatestone Hall, home of the Petre family, cousins of the Duke of Norfolk. They kept the Catholic faith throughout the reformation. I love to think that my great, great, great, grandparents knew about the priests hiding in ‘priest-holes’, and kept the secret despite the gruesome death awaiting them had they been found out.”

She was awarded the RC Diocesan medal in 1996 for her work at Archbishop King Middle School as a Governor for 20 years. And once read a lesson at The Red Mass in Westminster Cathedral. The Red Mass is held annually for Catholic lawyers, judges and members of the judiciary, on the same day as the annual Law Service held in Westminster Abbey, the ‘big one’ with the Lord Chancellor.

Judi met Dickie at the Young Conservatives in East Cowes. They married in 1963 and had five children in seven years – Clare, Katherine, Izzy, Paul and Louise. When she applied to become a magistrate she was initially turned down because her children were too young. Two years later she was invited for another interview, and was so determined to get on the Bench she kept quiet about having had another baby which she was breast feeding!

Because of the lack of swimming facilities on the Island Judi became involved with IWISPA – the Isle of Wight Indoor Swimming Pool Association – and that was the start of her fundraising career. She also became involved with International Help for Children, which allowed children from displaced persons camps in Europe to stay at Briddlesford Lodge Farm.

“I thought it was a great idea, but recently my children have said to me ‘why did we have to have all those kids here all the time?’ But I am still in touch with some of the children who came to stay,” she revealed. Judi’s children have also remained in touch with some, and Judi is very proud that they have all been to 3rd world countries carrying out voluntary service.’

Becoming a magistrate opened other doors, and she was elected to the Visitors’ Board of the Island prison which she found an invaluable experience. She said: “People who say prison is a doddle want to go inside and see for themselves. I feel strongly and deeply that we send far too many young people to prison. There are alternative ways and if they don’t work you look at who is imposing those alternative ways. They should be taught how to live a proper life.

“I went there thinking I would change the world I remember interviewing one prisoner and asking him what he wanted to do when he got out. I asked him what he did and he replied ‘I’m a burglar, ain’t I? My dad’s a burglar, and everyone down our road is a burglar. So what am I going to do – be a doctor?’ I think I grew up after he said that.”

Judi was appointed a deputy lieutenant and became chairman of the Island Magistrates in 1990s, and about the same time asked if I would like to become High Sheriff. She had four years’ notice to prepare for that, and became High Sheriff in April 1996.

“There was no way I could take on such a role without the full support of Dickie, and we knew it was such a huge honour. It was very demanding; I had 200 engagements and a lot of meetings. I worked hard, but I loved it – I wouldn’t have missed it for anything,” she said.

In her role she was invited to all the fire stations on the Island. As she was about to set off her car refused to start, so Dickie came to the rescue. She explained: “We travelled to Newport in Dickie’s farm van – a beaten up filthy dirty banger of a van – to be met by the Fire Chief. He said to give the van keys to one of the officers and he would take it to where the tour would finish. Then Dickie told him ‘you will have to put some petrol in it, because it’s on empty’. 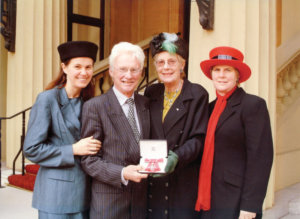 Awarded an MBE for her services to the Island community, Judi also campaigned for every child on the Island to drink milk in school. An EU subsidy was available but had never been taken up, so she worked tirelessly to raise the profile of milk, and highlight the health benefits. She said: “I will not rest until every child in school on the Isle of Wight has the opportunity to drink milk which has been produced on the Island at a subsidised price.”

Other duties have included Guides president from 1997 to 2002; Home Start (IW) patron from 1996 to present; Challenge and Adventure committee member from its start about 15 years ago; RCC President; Age Concern President; Asthma Swim Group President and David Hide Asthma and Allergy Centre Trustee.

She also became Carisbrooke Castle Museum’s Chairman of Trustees, representing the Lieutenancy. This appointment comes directly through Princess Beatrice, youngest daughter of Queen Victoria, and Governor of the Island, who founded the Museum in 1898 and ran it herself. Just before she died in 1944 she appointed a committee of Trustees one of whom had to be a Deputy Lieutenant.

When Judi reached 50 a new interest came into Judi’s life – that of walking. Since then she has taken part in Walk the Wight 10 times, walked the Pennine way and West Highland Way and climbed Helvellyn in the Lake District in snow and gales. On that trip she became one of ‘Ribby’s Heroes’ named after leader and great friend Mike Ribeiro. But to many she is the real hero!