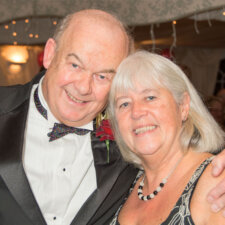 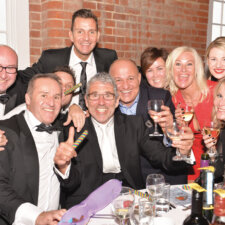 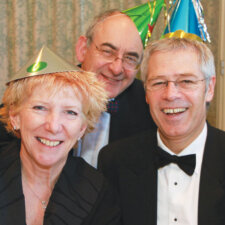 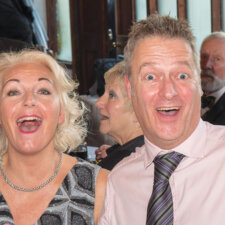 Founded in 1977 I could have hardly envisaged that this event would not only still be going strong but established as a recognised Island Christmas diary date. My original intention was to provide a Christmas party setting for local professionals and business people in order to relax and put aside the worries of the past year.  Very quickly this became an attractive event for many and the numbers soon swelled in excess of 50.

It was at this time it was necessary to consider larger and attractive locations around the Island which ultimately included several Manor houses and Yacht Clubs with the latest over the last few years being set at Haseley Manor with the kind permission of the proprietors Anthony and Vivian Roberts.

It seemed appropriate to apply any profits derived from the function to a worthy charity and I have always supported children’s charities in particular and those suffering with cancer. Both Earl Mountbatten Hospice and Naomi House have been the major benefactors with over £160,000.00 in total having been raised over the period to date.

Good food, unlimited quality wine and excellent entertainment provided on an all inclusive ticket basis has ensured around 100 people attending each year for a full days Christmas party regularly lasting over 7 hours.

Each year has ensured a real party atmosphere with guests dressing to impress,  much frivolity and the most excellent of menus provided at cost by our caterers, for very many years, being David and Raina Rogers of All About catering and Tim and Eve Flint of Eurovines providing selected wines, also at cost, to ensure maximum profit is derived from the event.

For several years the late Richard Henshaw, local Solicitor, provided excellent speeches  creating humour out of the “Willey” family name such as “Free Willey” “Terry Towelling Nappies”, “Terry Tubbies” and I shall always recall his introduction for me to participate in “Who wants to be a “Willionaire”.  When I was called forth by Richard who pointed out that in order to participate I was to have three options available, namely “50 -50”, “ask the audience” and then there was a silence after which he retorted “Oh!  you cannot phone a friend as you do not have one!”.

I was fortunate to be introduced to his Royal Highness Prince Edward at the opening of the new Hospice building on the Island and to my surprise he enquired of me personally as to our Christmas Lunches.  I was able to tell him that it had been so gratifying to note, that whilst we were enjoying ourselves annually in this way, we were able to remember those less fortunate particularly at the festive time of the year and long may it continue.