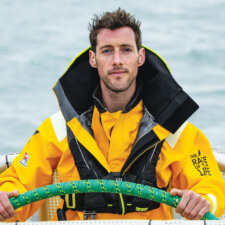 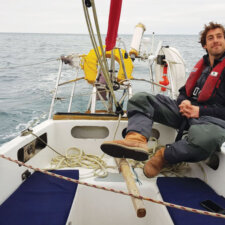 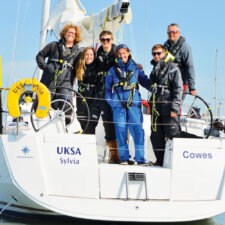 A sailor who launched his marine career by studying and then working as an instructor at Isle of Wight-based training organisation UKSA has just landed what can only be described the opportunity of a lifetime.

Josh Stickland, 31, has been announced as one of the 11 professional skippers who will each lead a novice team in the epic 40,000 nautical mile Clipper 2019-20 Round the World Race, starting this Summer.

Billed as “one of the greatest ocean adventures on the planet”, the Clipper Round the World Yacht Race is also undoubtedly one of its toughest endurance challenges, taking almost a year to complete.

Each of the 11 teams will comprise one Skipper, one Mate, and a crew of everyday people from a whole range of different walks of life, all competing against each other on the world’s largest matched fleet of 70-foot ocean racing yachts.

On being appointed as one of the Skippers, Josh said: “It has been a long time coming! I have wanted to be a Clipper Race Skipper since I qualified as a professional skipper when I was 22 at UKSA. Before then, I didn’t even know it could be a job – but when I found out it was possible, I wanted to do it and have been working ever since to get to this point.” 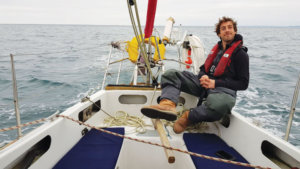 Josh, who grew up in Bursledon and now lives in Southampton, will bring to his new role a wealth of sailing experience gained over the last 21 years, and says that skippering in the Clipper race will be the highlight of his career so far.

He gained his professional sailing qualifications at Cowes-based UKSA in 2008, and these included Professional Instructor Training in watersports.  Two years later, in 2010, he qualifed as a Commercial Yachtmaster.

Josh also worked at UKSA as a watersports instructor and whilst there, he undertook numerous other courses, including MCA qualifications, to further his professional development. He was also a recipient of the Stephen Thomas Bursary whilst undertaking his professional training at UKSA.  In short, an impressive list of achievements that is sure to stand him in good stead when it comes to him skippering the challenging Clipper Race.

Josh has fond memories of his time at UKSA and says he owes a lot to the charity organisation that specialises in building the confidence and ability of students while teaching them various water-based skills.

“I’d like to thank everyone at UKSA throughout my years of learning and working there, from the kitchen, and housekeeping staff through to the watersports and yachting also the back offices” he said. “Without all of them, I wouldn’t be doing this.

“UKSA really is a special place that is always a joy to return to and has given me the support and the coaching needed to get me where I have today. When this chapter comes to a close I look forward to seeing everybody there!”

UKSA’s CEO Ben Willows declared that he was delighted to hear Josh had been selected for the Clipper Race, and said: “I have had the pleasure of seeing Josh grow and develop as a professional yachtsman during his time at UKSA. As a popular instructor and member of the USKA team, I know we will all be watching him closely as he takes on this epic race with his crew.”

The Clipper Race was established in 1996 by Sir Robin Knox-Johnston, the first person to sail solo, non-stop around the world in 1968-69. His aim was to offer anyone, regardless of previous sailing experience, the chance to embrace the thrill of ocean racing.

The Race is the only event of its kind for amateur sailors, with around 40 per cent of crew being novices who have never sailed before starting a comprehensive training programme ahead of their adventure.

Sir Robin said: “The role of Clipper Race Skipper is one of the toughest, but most rewarding jobs that exists in sailing. Not only do you have to be a highly capable sailor to be able to complete the relentless challenge of circumnavigation, you also have to be an excellent instructor and leader.

Now in its 12th edition, this unique sailing challenge brings together everyone from chief executives to train drivers, nurses and firefighters, farmers, airline pilots and students, aged from 18 upwards, to take on Mother Nature’s toughest and most remote conditions. There is no upper age limit – in fact, the oldest competitor to date is 76.

The Clipper 2019-20 Race starts this Summer and will leave from the UK, calling at ports around the globe and including stops in South America, South Africa, Australia, three stops in China including Sanya, Zhuhai and Qingdao; West Coast and East Coast USA before heading back towards the UK. For more information, visit www.clipperroundtheworld.com