Firefighter Matt Sainsbury: A life on the front line

Home|Interviews|Firefighter Matt Sainsbury: A life on the front line
Previous Next

Firefighter Matt Sainsbury: A life on the front line 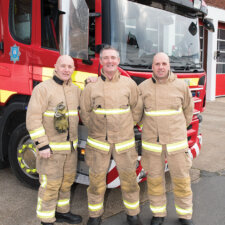 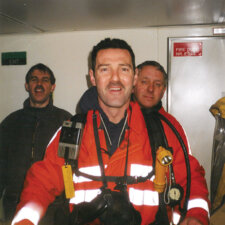 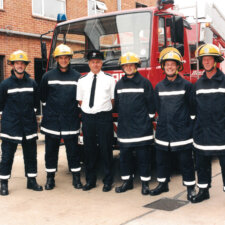 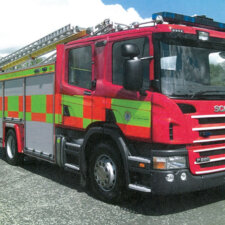 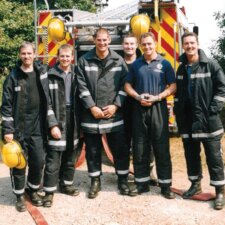 He admits it wasn’t his first choice of career, but as soon as he got his first taste of being a fireman, Matt Sainsbury was hooked  – which is why, 39 years later, he’s still doing the job he loves. The firefighter role has changed beyond recognition though, as he explained to Jackie McCarrick.

It was the dramatic national strike by firefighters back in 1977 that indirectly led Islander Matt Sainsbury into the service.

Rattly old Army ‘Green Goddess’ vehicles had to be called in to provide emergency cover for the strikers, who were demanding changes to their shift patterns.  The industrial action led to a big fire service recruitment drive in 1978, which was exactly the time that the 19 year-old Matt was looking for a direction.

After leaving school, he  had joined the Merchant Navy and made a few trips to South Africa before deciding that wasn’t the job for him. Back on the Island, he worked for a while as a tree surgeon and then went to Canada to work as a lumberjack – but admits he didn’t have much direction. 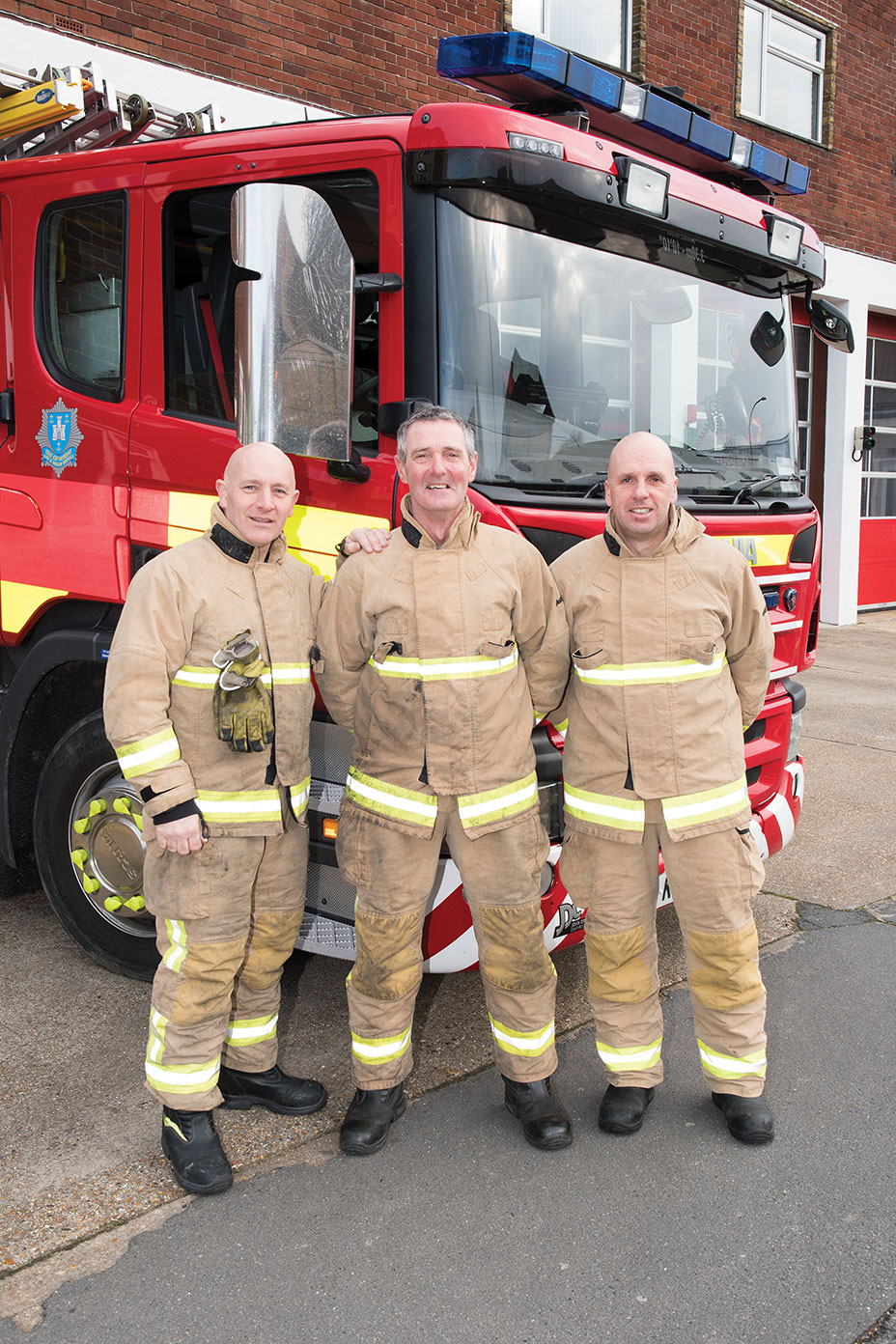 “I didn’t seem to know what I wanted until my parents pointed out an ad in the County Press for firefighters and I applied” he recalls.

He was taken on with six others and started his 14-weeks of training at Newport Fire Station (then the only full-time station on the Island) in late 1978.

“At that stage it was just a job – I guess at  the age of 19, I just wanted to go out and explore different things” he says. “But I was surprised at how quickly I got to love it.  I loved the job and I also loved the time off that it allowed me, because of the shift patterns”.

Matt also enjoyed the unique close-knit community in the fire station, where colleagues literally would work, rest and play together.

In fact during the first couple of decades of his fire service career, Matt was surrounded by many ex-Forces people, many of whom were much older than him.

“The culture was very close and supportive.  You not only worked together, but because you slept at the station, you’d also have your meals together, play darts and socialise together, and it meant you really got to know people”

Nowadays, the age profile of staff is generally younger, which means many have young families and big financial commitments, so the job tends to be much more than just a job, rather a culture. 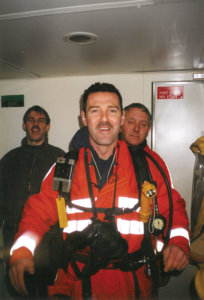 The other big difference when Matt joined the service was the equipment – which would be almost unrecognisable to a modern firefighter, used to lots of hi-tech gear.

The vehicles were much less sophisticated for a start:  in the late 1970s and early 80s, fire engines were petrol-driven, much smaller – with room for four or five at a squeeze – and there was a thin wooden cab with aluminium framework, hardly the most protective of shells.

There wasn’t much room in the lockers, the engines weren’t powerful or capable of high speed, the sirens were weak-sounding and the blue lights dim.  In fact some engines still had hand-bells on them!

Meanwhile, the kit for firefighters was almost cartoon-like by today’s standards – black tunics with plastic leggings and rubber boots, and yellow cork helmets.

Looking back, it’s a wonder the fire teams could do their job – but as Matt points out, at the time that was the best kit available.

As far as road incidents went there wasn’t the same volume of traffic on the Island in those days, and the incidents they attended were usually more straightforward.

Typically, there would be stubble fires on farm land in summer and autumn, and chimey fires in winter.  Then there were the beach incidents such as when chemical spillages were washed up from ships, and firefighting at sea, when crew  and gear would have to be lowered in by helicopter. 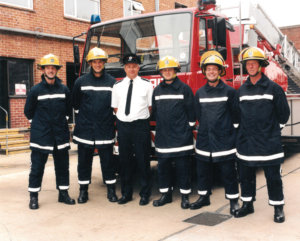 Nowadays, the whole emphasis of the fire service has changed to such an extent that fire fighting actually accounts for less of the workload than road traffic collisions.

With more traffic on the Island’s roads and higher numbers of young and elderly drivers, fire crews are kept busy using their  rescue skills and high-tech equipment to free people at accident scenes.

Meanwhile the firefighters have a kit that includes overlapping heat and fire-protective suits, helmets that cover most of the face as well as head, leather boots with fire-resistant soles, and their own individual breathing apparatus.

Having the latest cutting equipment means that the typical length of time to release a casualty from a vehicle has dropped from as much as 90 minutes to almost half that – greatly increasing their survival chances.

“It’s a very small island, we have an awful lot of traffic, many more larger vehicles and people who feel over-confident in driving them” says Matt, “so it’s perhaps not surprising that we have so many incidents to deal with on the roads”.

It means that Matt and his colleagues have had to witness some “awful scenes” at fatal crashes over the years.

“After you have seen it a number of times you do become slightly hardened and in the station there is a kind of black humour we have that helps people cope.

“That’s not to say we don’t care – in fact there will always be incidents that really get to you, such as if a child is involved – but the humour is just a form of release, because if you bottled it up it would really affect you”. 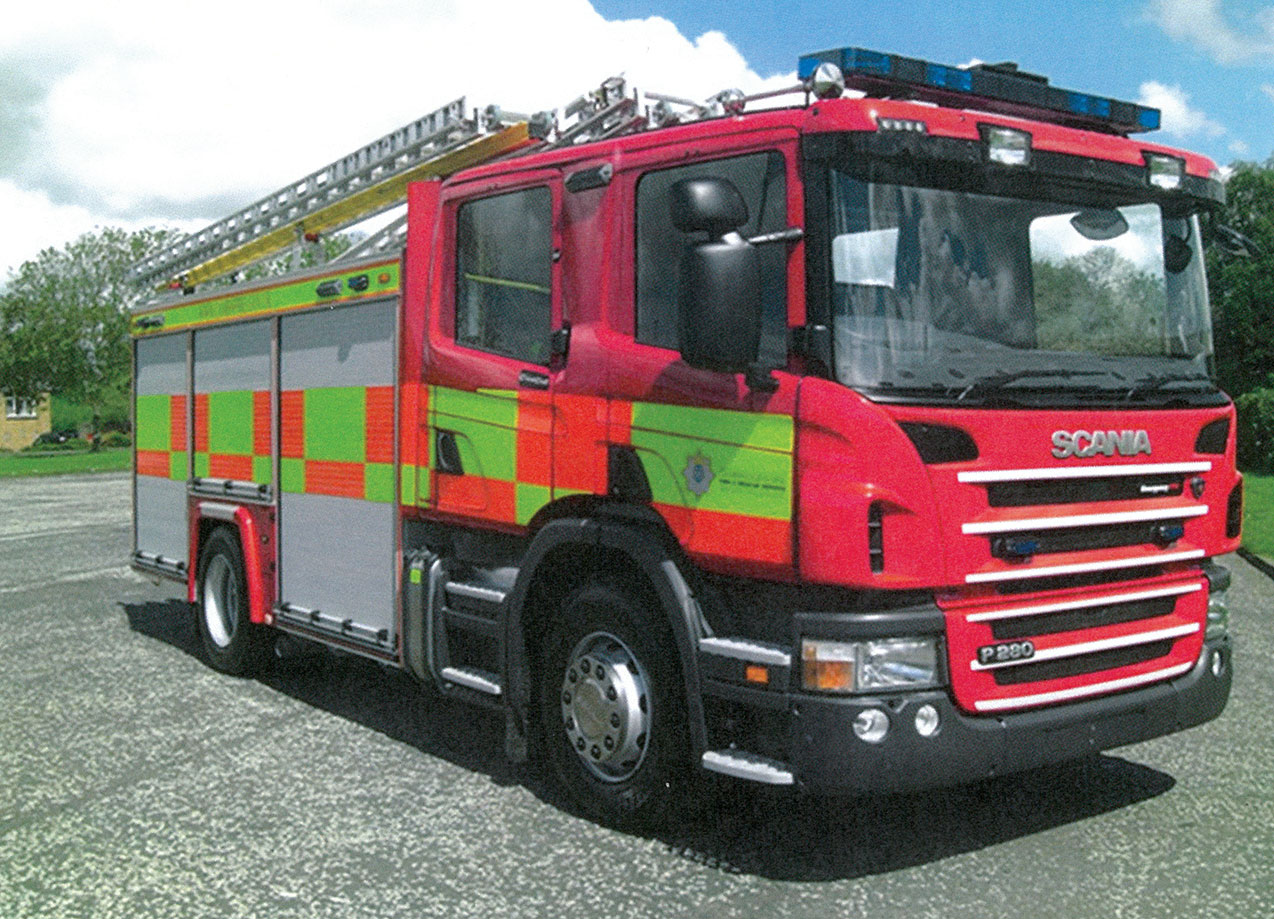 The upside to the fact that firefighters now attend more road incidents than fires is that they have done such an effective job on the fire prevention side, talking to schools and community groups and giving advice on  keeping fire safely in its place.

It’s a part of the job that Matt says he’s really enjoyed – getting out in the community and making a difference.

In fact, it’s this community involvement part of the job that kept Matt from ever going for promotion.

“If I’d done that it would have meant coming off the front line, and I have never wanted to do a desk job” he says. Hence his 39 years at the sharp end of the service.

He admits that he did retire in 2009, having chalked up 30 years – but decided to go straight back because he felt he still had plenty to give.

“Part of the appeal is that every time I go on duty I have no idea what will happen – it could be anything from a light aircraft crash to a RTC or a bird caught up in wire in a tree – and that makes every day totally different.

“You have the satisfaction of knowing you are making a difference to someone at a critical time, and of course sometimes you get them coming back to say thanks, which is always nice”.

Matt says he’s also enjoyed being involved in fund-raising events, for which the fire service is well-known.

He’s done everything from running Macmillan coffee mornings at the fire station to doing bungee jumps and even a 1,000-mile cyle ride from Newport to Prague. – and that’s when he’s not been organising the famous Christmas tree on top of the Newport fire station tower, which has been his job for nearly 30 years.

He admits that as he approaches a 40-year firefighting milestone, he’s considering finally hanging up his helmet and taking life easier.

“I may retire at the end of 2017 but haven’t made the final decision yet” he says.

It will undoubtedly be a big wrench after a lifetime of active service – but it will free him up to spend more time at home in Carisbrooke with wife Tracy, a police officer, and their two dogs, and to carry on enjoying his football playing and refereeing.

“I’d like to stay sporty for as long as I can” says father-of-three Matt, who survived a serious health scare in 2012, “and maybe take on some voluntary work.

“I consider myself to have been very lucky and if I can give back something to the community, then I’ll be really happy to do so”.