Den Phillips: End of an era

Den Phillips: End of an era 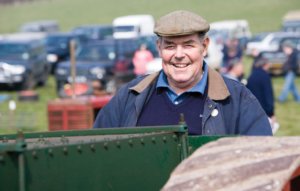 Den Phillips has lived at Compton Farm, Brook for the whole of his life. He has seen many things throughout the years, and at the age of 79 he has taken the decision to part with some of his beloved tractors and farm equipment. Even after the sale he will remain at Compton Farm where he will continue beef farming and in his spare time will tinker with his Burrell Traction Engine.

Den Phillips was born in a nursing home at Freshwater on the 12th May 1928. After being born Den returned home to Compton Farm a fortnight later and has remained there to this day. His father, a farmer since 1907 originated from Barnsfield. He came to live on the Island in 1926. Den was one of 9 children and he has fond memories of sitting round the table, all 12 of them (including his fathers sister) before the war. Dens father unfortunately died in 1956, and gradually all Den’s brothers and sisters got married, most of them deciding to move off the Island.

In 1956 the family were not sure what was going to happen due to the death of senior Mr Phillips, and that’s when the National Trust stepped in and purchased the farm in 1957 and Den took on a tenancy. “At that time all the family went off to different locations and I was left on the farm with my wife Jane.”

Den, who was the youngest, only has one brother (who is now in a home) and one sister remaining, who lives in Freshwater. Den has spent his whole life in the valley adjoining Compton Farm “Years ago we used to have a small herd of cows, approx 25, when cows were profitable, but nowadays they are far from profitable, back in those days we used to earn a nice little living from them, but not any more.

“One funny story I remember was when my father asked the Sealey family to build a tunnel across the Military Road at the time it was being built. This was so dad could bring his cows in from the fields on the opposite side of the road. I remember my father specifically asking Mr Sealy to build the tunnel by the cottage so the cows went down the lane and through the tunnel, however when the tunnel work was started they put the tunnel up the hill towards Freshwater, at the time the tunnel cost about £600 to build. When they had finished Mr Sealy said there you are Mr Phillips there’s your tunnel. My father was a real awkward old devil and turned round to Mr Sealy and said lock it up, I’m never going to use it, you built it in the wrong place! The tunnel was never used from 1932 to 1956.

“When dad died I opened up the gates and built a fence up one side and have used it ever since. It’s very handy because the cows can go down on their own and come back on their own.” Eventually Den was forced to stop producing milk when milk hit an all time  low of just 12p a litre. The herd was then sold off, and that was the end of that. Nowadays Den has turned to beef farming. “Today beef cattle can make an enormous amount of money, however I don’t know if there is that much money made over the whole year though. We also have camping and caravans throughout the summer months, this is where the majority of the money comes from.

“I think it’s an awful shame, in fact terrible how traditional farms are disappearing nowadays, they should keep British farming going. It shouldn’t be allowed to go dow hill like it is. The Government have got this single payment, and are giving farmers money for nothing, I think it’s all rubbish. All they have to do is give us a good price for our food and we will produce it. Also I blame the supermarkets, they are getting some food from abroad and are cutting prices down and down, after all they bring milk from Poland when they can get it from a farm 10 minutes down the road, it’s all wrong.”

I asked Den, with all the years that you have lived on Compton Farm what’s your best memory? “I think it would have to be just after the war, there weren’t so many people about, and things were reasonably cheap, you could buy cars, vans, trucks or tractors for just a few hundred pounds, it was nicer then you didn’t have these vast sums of money about. In those days you could buy a house for a hundred pounds! We had the best years from the late 40s through to the 60s.”

One question I had to ask Den was about the pit which is located just by the tunnel. Rumour has it that this was where the Germans dumped their bombs during the war, was this true? “No, not at all, if you look behind the cottage the road is built up about 15 feet. An old boy that used to live here years ago remembers they had 50 horse and carts and gangs of prisoners who dug that hole and moved the soil to where they built up the road, that’s all it was, it’s known locally as 10 Acres Pit.”

I asked Den what this sale today is all about? “I feel that now I have reached 79, times getting on, and if I passed away most of the stuff I have would go for scrap, which I think would be an awful shame. I would like to see the items today go to good homes where they will be looked after and get the same amount of enjoyment as I have had over the years.

“I love the old Alldays tractor, I remember one of the very first trips I took in her when I went to Godshill on a Sunday morning. It was such a lovely day, and we had lots of fun. The Cheeks bought the tractor in 1918 to build roads and tow trailers around the Island because at that time there was nothing that could tow like this old girl could.

“I bought her off Mr Cheek (my Mums brother) in the early 70s, and old Mr Cheek said to me, as your Mum is a Cheek and you’re half a Cheek you can have it for a pound and half a dozen eggs, as long as you get it completely going so that I can drive it round the agricultural show the following year. I’ll be very sad to see this go today. People have come from all over the country to try and buy the Alldays today including as far as Ireland. Until the hammer goes down I don’t know what it will fetch. I cannot put a price on it.”

I asked Den what the future holds? “I’ll carry on beef farming and I still have my Burrell Traction Engine in the shed and a few other bits and pieces to keep me amused.” I asked Den when the auction had finished what his feelings were? “I’m very happy, I’ll just stick the money in the bank and forget it, I don’t want to be going round spending money!