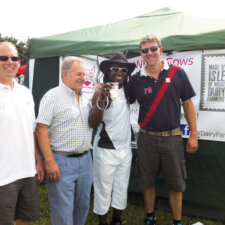 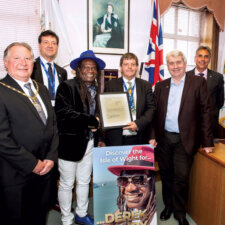 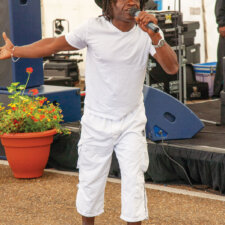 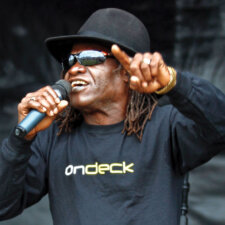 It’s a song he wrote over a decade ago just as a last-minute filler for a 12-track debut solo album – but now now his catchy anthem “Welcome to the Isle of Wight” has  catapulted Ryde-based Reggae singer Derek Sandy into the national spotlight after an appearance on Britain’s Got Talent.  Jackie McCarrick caught up with the musician who spreads smiles wherever he goes.

“I’ve got to get an agent!” said Derek, as he fielded phone calls from people variously wanting to book him, congratulate him, interview him or give him awards – all in between juggling the day-to-day demands of his Island life.  “I certainly wasn’t expecting all this”.

Not that he’s complaining:  Derek is a sunny and smiling ‘glass half full’ character – which is how he managed to attract such an affectionate following of people right across the Island for his particular style of feelgood music, which he’s been performing here since he arrived in 2002. 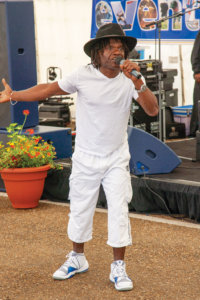 As he told the TV audience on BGT, he came here with a plan to stay for six months – but never went back home to his native Tobago.

“My original plan was to come to the UK, get a job for six months and earn enough money to go back home and buy a boat” says Derek.

But why the Isle of Wight?  He explains that he’d met some Islanders who were holidaying in Trinidad and Tobago, and who offered him accommodation for a working visit back here.

Trouble was, once he’d made the leap and landed on this strange new island, he couldn’t manage to find a job in tourism.

“I decided there was only one thing to do, and that was to go back to my singing and entertaining, which I’d done back home when I was younger” he says.  He reckoned there was a gap in the market on the Island for his kind of act – and was quickly proved right.  In fact, within the space of three months, he had regular bookings at pubs, and invites to perform at parties and weddings.

And as his music career flourished, he began to build a profile on the Island and found he loved the place so much that he decided to make it home.

“It’s an easy sort of lifestyle here” says Derek, who has built a particularly big following for his ‘Love Mondays’ at Appley Park, a fun family event featuring Limbo dancing on the beach.

By 2005, he’d started working on his album Dancing in Heaven, which ended up being three years in the making.  He was just about ready to go to London to get the album mixed when he realised it needed a 12th track – and in the space of just one day, he and his wife Katie came up with the catchy little song that was almost immediately adopted as the Isle of Wight’s anthem and regularly played on local radio. 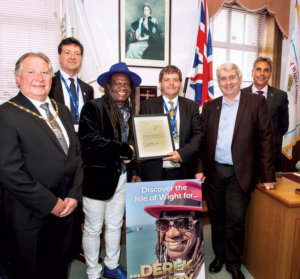 “That was the song that really took off” he says, “and people suddenly wanted me  to sing it everywhere I went.”

So it shouldn’t have been a huge surprise when Derek’s performance of the song – complete with giant photos of iconic Isle of Wight landmarks –  and all on prime-time Saturday night TV, caused a massive spike in Internet searches for information about the Island.

For local tourism, it was the kind of publicity that money just can’t buy – which is why one of Derek’s earliest invitations after his success on the show was to attend a meeting of the Isle of Wight Council.

Presenting him an Ambassador of the Isle of Wight award, Councillor Wayne Whittle said Derek had done more for the Isle of Wight in three minutes on Britain’s Got Talent, then anyone had previously done for a very long time.

Of course Derek was sworn to secrecy about the outcome of BGT – which is recorded in advance – but says he will probably have some fascinating tales to tell about the experience once it’s all behind him.

Not that he is a newbie when it comes to TV exposure – this is a man who has appeared on Come Dine With Me on two occasions!

“Once you’ve done one programme the TV people have your number and can call you back for other things” he says.

His phone is certainly ringing off the hook just at the moment – and in some cases, with requests from much further afield than the Island.

This, he says, is where he may have to start drawing some lines and enlist the help of an agent.

He’s being inundated with requests for charity work, too, and says that he will need to maintain a careful check on that.

“This is my living – I’m not a rich man, I have a mortgage to pay like everyone else” he says.  “At the moment I may be the most popular person in town, but I know what it’s like to live with nothing.”

As one of four children of a Trinidadian mother and Tobago father, Derek’s early life involved singing in the Baptist church and taking part in school singing competitions.

He always wanted to be a singer, and as he got older joined a few bands – even at one time supporting Bob Marley and other great Reggae artists and singing for the President of Tobago. 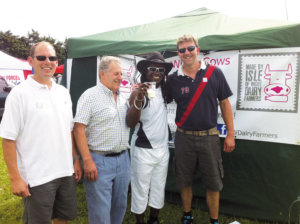 “But then I ended up in the wrong company for a while” he says.

Having got himself back on track, Derek took the decision to walk away from the music scene with all its temptations  – and admits he never expected to go back to it.  In fact, had he not found himself on the Isle of Wight in 2002, and without a job, this second-time-around music career might never have happened.

“What it comes down to is that I just like to lift people, and make them feel happy” says Derek, who reveals that he has a big dream – to set up a proper steel band here on the Island and give the place some real tropical vibes.

“My idea would be to have an Isle of Wight Steel Symphony – it would be magnificent!” he beams.

Meanwhile, he’s been asked to get involved in a new promotional video for the Island, and reckons it could be the start of a new phase for the tourism business here.

“We were given a great opportunity with all that TV exposure, and now we really have to step on the gas!” he says.

Apart from all that, Derek intends to continue enjoying life here on his adopted Island.  He and his Manchester-born wife Katie, who works in the health department at Isle of Wight Council, love the local countryside, make the most of woodland and beach walks, and enjoy the laid-back lifestyle.

Theirs is a musical household, with step-son Alex, 17, also a musician who has appeared on TV, and who often plays piano with Derek.

“In many ways, life here is a bit like Tobago” he says, “although there are obviously things I do miss about home”.

However, Derek’s mother still lives there, along with other relatives, so he and Katie get to go back there every winter for a holiday.

“It’s a great way to re-charge the batteries every year” he says, “although we missed out last winter because of me being involved with BGT.”

Asked his age, Derek had to think before answering 56.

He explained: “Where I come from, people don’t think about age or birthdays – in fact many don’t even know how old they are.

“We just tend to live in the moment, enjoy each day.”

And that’s precisely the spirit that has made Derek such a loved figure on the Isle of Wight.