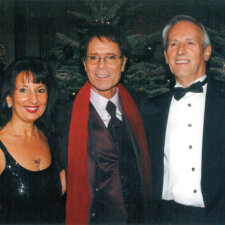 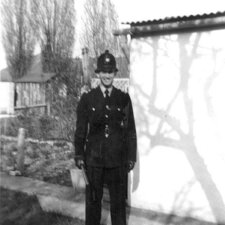 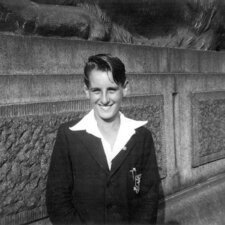 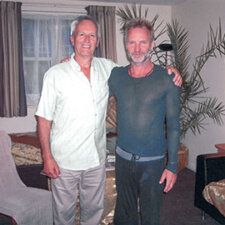 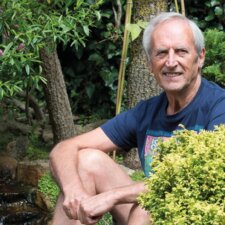 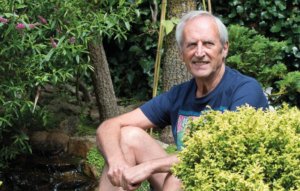 More than half a century later, at 73, he shows no sign of slowing down or losing his insatiable curiosity for life and people – as we discovered when we caught up with him.

Writing a CV for Den Clare would pose an interesting challenge: he’s been a banker, a policeman, a bookkeeper and a shop owner.  He’s fascinated by spiritual matters and the power of the mind, and is well-known and highly regarded as a hypnotherapist.

A distinct childlike streak is revealed in his love of toys (which he collects avidly), the enjoyment he gets from being photographed with some of the celebrities he drives around during the Isle of Wight Festival – and his passion for cars, especially those of the speedy, open-topped variety.

So what are the roots to this complex and multi-faceted personality?

Well, he grew up in Aldershot, Hampshire, in a very loving but somewhat repressive household.

“My parents were very shy so my memories are of always being told to keep quiet, turn the music down, that kind of thing” he recalls. “My dad worked very hard as a chef and would always be tired out when he came home, so I never did much with him. I tended to spend a lot of time on my own, which I suppose made me quite introverted and thoughtful”.

“I guess that may explain why I now love nothing better than driving my car with the top down and my music blaring!” he laughs.  He also reflects on how different life is today for his six grandchildren, who are all “full of life and confidence”.

Having always been top of the class at primary school, Den says he didn’t do quite so well at his strict grammar school, and came out with just the “bare necessities” of a handful of O-levels. 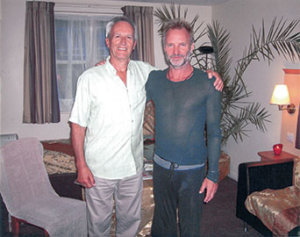 With only a few career options open to him at 16, he chose to go into the bank, and joined Lloyds in Farnborough in 1957.

“In those days, the bank manager was god – feared and respected by everyone,” says Den. “I can still recall my first day, and my fear of having to use the telephone”.

The fear didn’t last long though – because within 18 months he’d risen in rank to the heady heights of number one cashier at the branch. This made him responsible for running the Frimley Green sub-branch, to which he was regularly despatched with his own elderly ‘guard’.

Such was his progress that Den was told by his manager that he could expect to be a bank manager himself… by the time he was 40!

And that scary little prediction, it seems, was enough to kick the more unconventional side of his personality into action.

It sounded impossibly old to me, and the thought of waiting that long just wasn’t on!” he says.

So what did he do?

The very next day he strode into the police station, right next door to his bank, and asked how he could go about joining the Force.  Two days later, he’d handed in his notice at Lloyds and was looking forward to training as a PC.

“My parents weren’t best pleased,” he says, “because they saw the bank as a good safe career – but I’d already made up my mind”.

On the beatAfter spending three months at the police training college in Sandgate, Kent – which  he loved and thrived on, with its mix of sport and comradeship – he was posted away from his home turf, and promptly landed on the Isle of Wight.

“I was posted to Shanklin, which I had some memories of from holidays as a young child, but otherwise it was all new to me” he says.

He instantly loved the work though, pounding the community beat and getting to know people. Not that there was much crime in those days:  “You might get the odd pub scuffle during the summer season, but in winter there was nothing happening at all”.

That left him with plenty of time to find his way around and get to know people – and it wasn’t long before the gregarious Den had struck up a friendship with the people at a bookshop in Shanklin’s Regent Street, known rather quaintly then as Ramsden’s Library.

He was often in there searching for books on his abiding passion – matters of the mind, spirituality and hypnosis – and after hearing of his banking background, the owners invited him to do their bookkeeping in his spare time.

This was to turn into his next career move – out of the police force and into the unlikely role of a full-time job with the bookshop.

“If I hear that little voice telling me to do something, I always listen to it,” he says.

The bookshop owners agreed to match his police force pay, and off he went down a new path. In fact, less than two years later, when the lease came up for renewal on the shop, it was the 21 year-old Den who approached the bank for a loan to buy the freehold of the building.

“My own experience in the bank meant I knew how to present a business plan – and it got me the loan” he says.

Then it was a case of using his youthful enthusiasm again, to help revive the shop, re-naming it Ramsdens and adding gifts and other products to the book offering.

Two years after that, the partners in the business retired, and it was off to the bank again for Den, for a further loan to buy them out. 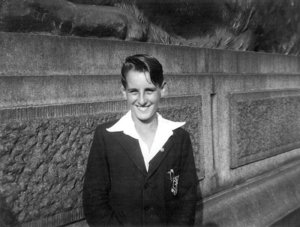 Some years later, he borrowed again – to buy another freehold shop just across the way. This became Den’s Giftbox, a sister business to Den’s Toybox.

The responsibility of running two shops would be enough for most people – but not Den, who all the time was continuing his studies into hypnotherapy.

He traces his interest in the power of the mind back to his teens, when his mum, a long-time spiritualist, took him to see a spiritual healer because he had an eye problem.

“A week after seeing this woman, the problem with my eye had gone, and from that time, I became fascinated with trying to discover how things like this worked”.

He met hypnotists of various kinds and ended up studying during the 1960s with Gil Boyne, an American widely regarded as a pioneer in modern hypnotherapy.

From there, he began practicing hypnotherapy one day a week whilst still running the two shops.

He has no time for stage hypnotists – mainly because he knows the power of it, and how it can be misused, especially with susceptible people.

“It’s well-known that a certain percentage of people are much more suggestible than others, and they’re the ones who tend to be singled out in these stage acts” he says.

Den prefers to use the power of hypnotic suggestion in more positive ways, to help people overcome fears and phobias, quit destructive habits and even deal with long-standing health conditions.

Whilst he will never guarantee that hypnotherapy will work for people, he has seen some remarkable results, such as the woman with a long-standing and very severe case of eczema, which cleared up within a week.  Another client with botched facial surgery that had led to paralysis was back to normal within months.

“Nobody really understands the mind, but it has such power over the body” says Den, “and if you believe that, there are almost no limits to what you can achieve”.

“Every time I say I’m going to pack up, something a bit unusual comes along to spark my interest again.  I really do love it when you can make a difference to someone’s life.” 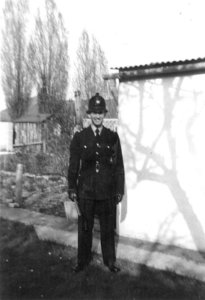 Alongside the hypnotherapy practice, he also still offers some spiritual healing for people with more severe illnesses, although he never offers a ‘cure’ and will not charge for such work.

He says he has had only one complaint in 35 years of practice:  “On the Isle of Wight you simply wouldn’t be able to continue if you weren’t getting it right, because everyone would know about it!”

There was one situation back in 2001 that everyone on the Island DID hear about – the so-called “Curse of the Pyramids”, which Den unwittingly found himself at the centre of.

This was the ‘Women Empowering Women’ pyramid-selling scheme that went badly wrong, leaving some people out of pocket when it all collapsed.  Unfortunately for Den, he had mentioned it on the local radio station with an invitation for people to call him for more information – although he was nothing to do with the organising of it.

This turned into what he calls “the worst three weeks of my life”, after the scheme was picked up on by the national press, everybody involved lost confidence, and it all came crashing down amid accusations and bad feeling.

“I was probably naive but I went into it in good faith” he says, “not realising that it was all a numbers thing and that eventually the numbers would run out on the Isle of Wight.  I seemed to be singled out for attack and people thought I’d made loads, which wasn’t true – it was horrendous.

“If I have any regret, it is about getting involved in all that – I guess most people have something they regret.”

Being down is very much the exception for Dn, though.  He’s someone who knows how to make the most of life.

He loves his cars, and regularly updates his driving skills by re-taking the Advanced Driving and ROSPA tests.

Convertible cars are his passion, and his dream car is the one he’s got – a10 year-old Jaguar XK, which he reckons is reminiscent of the old E-Type.

“I use it every day and absolutely love it when I can get the top down and just drive for the pleasure of it”.

He’s also turned his passion for wheels into a sideline – driving the Mayor in carnivals for over 30 years, and driving celebrities appearing at Isle of Wight Festivals.

This has brought him into close contact with some of his musical heroes, such as Tom Jones, Paul McCartney and Sting.

In fact it was Sting who got into conversation with him about meditation and matters of the mind – and then requested a 20-minute hypnotherapy slot with Den before his Festival gig.

Naturally Den didn’t charge the superstar – but asked for a photo with him in return. 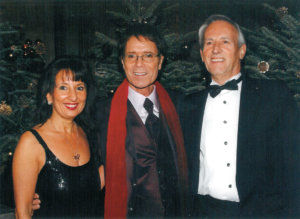 It’s well known that Den has a weakness for being snapped with celebs, but he insists he never pushes it.

He was, however, delighted to meet his idol Cliff Richard along with Gloria Hunniford and Des O’Connor, at one post-festival charity event.

On a day-to-day basis, Den says he gets the most joy from his growing family.  He has four children with his ex-wife Sandra, and a 32 year-old daughter Emma with long-term partner Elaine, an events manager for the Council.

His sons Darren, 50, and Bernie, 48, live in California, whilst two older daughters Nathalie and Lucy are both still in Shanklin, running their own businesses.

With six grandchildren, Den says he feels content and happy with his lot.

“We have some lovely family holidays in Spain and Egypt but I’m always glad to come back home.  I walk in here and it’s heaven.

“I don’t think about the future – because the future is here, now.  Whatever is past is gone, and we cannot change.

“Heaven for me is here, right now”.