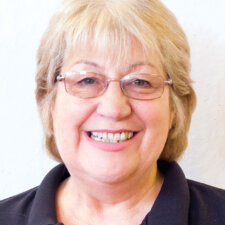 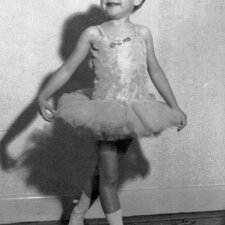 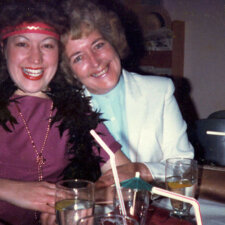 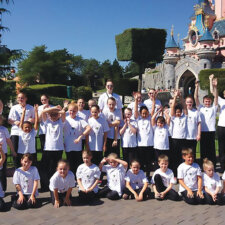 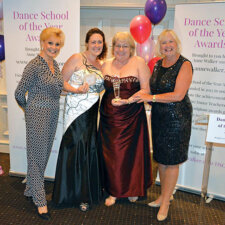 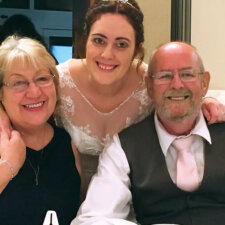 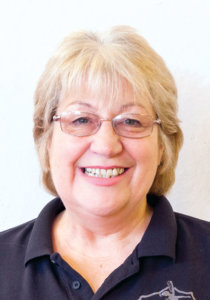 It felt like the end of the world when Linda Smith and her husband lost their hotel in Shanklin in 2008, after years of battling to make the business work.  But from the ashes of what seemed like a disaster, there sprouted the seeds of a whole new business and a more fulfilling way of life – and it involved going back to her childhood passion for dance.

Jackie McCarrick has been finding out more about the
Principal of the Island Dance and Theatre Company.

You don’t need to talk for very long to Linda Smith before it becomes clear that she’s a great believer in destiny, and in the power of following your heart.

Not that her life has been without its trials and challenges –  but ultimately, she reckons, even the dark times can turn into unexpectedly good outcomes.

It was her heart that brought her and husband Ken to the Island in 2002, when they decided to leave behind their old life in Leicester and take on the Suncliffe Hotel in Shanklin.

Linda, who had been visiting the Isle of Wight since childhood, enjoying annual caravan holidays with her parents, says she’d always dreamed of living here.

“I just love the place – always have done” she says, “and I’d always wanted to open a hotel here”.

So when the opportunity arose, the family effectively burned their bridges in Leicester and set sail across the Solent, full of hope for the new life they envisaged.

The move involved one rather major sacrifice for Linda, however:  she walked away from a dance school business that she’d built up over 21 years, and handed it over to her business partner to carry on.

“I’d come to terms with that” she says.  “All I could think about really was our new life on the Isle of Wight.”

To say that dancing was in her blood would be an under-statement.  In fact, Linda started ballet lessons at the age of two-and-a-half – not because she was the product of a pushy theatrical family, but simply because it was a fun activity for kids in the neighbourhood. 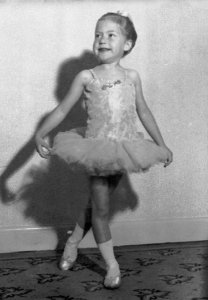 Whilst Linda’s dad Ron was involved with brass bands, her mum Ruth certainly had no musical or dramatic inclinations – and indeed she encouraged the dance-mad young Linda to take a shorthand typing course in order to have “something to fall back on”.

Linda laughs that she never actually called on her shorthand or typing, because dance and drama became her overriding passion, filling most of her waking hours when she wasn’t at school, and causing her to yearn for the day when she could dance full-time.

“I think I always had a theatrical streak in me” she says.

She soaked up everything she could learn from her teacher “Miss Doris” of the Doris Gwilt School of Dancing – from classic ballet and tap, to disco dancing, musical theatre and acrobatics.  She appeared on the radio, in dance shows, festivals, musicals, plays, pantomimes, reviews and old tyme music halls, did a TV promotion for cheerleading – and from the age of 15-19, earned herself pocket money of a princely £2 a performance as a magician’s assistant for a number of conjurerers.

Notable among them was her appearance as ‘Ann’ in the magical double act Larano and Ann, which involved Linda being sawn in half and having 21 daggers in her head. True to Magic Circle rules, she’s still not giving away any secrets about how she survived!

By the age of 21 she had passed her teaching exams with the IDTA, (The International Dance Teachers Association) and took a rather brave leap for one so young – setting up a dance school in collaboration with her friend and fellow dancer Julie Watts.

“I did have a lot of support from my mum and dad, as I always had done” she says.  “They were the most wonderful, encouraging parents you could wish for, and once they could see my commitment they were behind me all the way.”

In those less technologicially advanced days of 1981, the school’s set-up costs were minimal:  the girls rented a church hall and had help to buy their biggest piece of kit – a tape recorder that was to be their pride and joy for 10 years.

Over a period of 21 years, they worked hard to build a thriving dance school – the one that Linda would ultimately choose to walk away from when she finally followed the call to the Isle of Wight in 2002.

The long-discussed decision to move was finally prompted after Ken was made redundant from his manager job, and they decided it would be a good time to follow their hotel-owning dream.

The move was literally ‘lock, stock and barrel’, and Linda and Ken were joined on the Island by her parents, who already owned a caravan in Shanklin and moved into it to enjoy a permanent park home life. 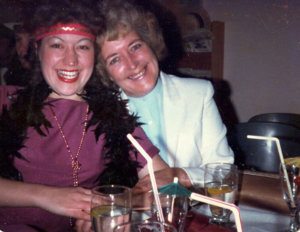 Meanwhile Linda and Ken set to work at the Suncliffe Hotel, throwing their energies into the many renovations and a whole series of promotional ideas to drum up business.

It proved a tough experience – not least because they had to maintain their family life, with two primary school-aged children, Jonathan and Stephanie, still at home.

“We gave it all we had, but it was a hard life” Linda admits. Probably tougher than they had bargained for, because by 2008 they were facing bankruptcy.

During this massive low-point in their lives, Linda and Ken had to stay temporarily in a guest house whilst their youngsters Jonathan and Stephanie were taken in by Linda’s elder daughter Charlotte, who was by then married.

Not surprisingly, Linda went into a depression as they tried to consider their next steps.

And as it turned out, their next steps were to involve dancing!

After several months they found a home to rent and the ever-supportive Charlotte issued her mother with a challenge:  “She said come on Mam, why don’t you just go back to what you do best” Linda recalls.

“Charlotte was absolutely brilliant.  She said she’d help me, we could do it together, and so in 2009 we launched with our first class in Brading School, and we haven’t looked back”.

Within a year of starting out with just 15 pupils, the enthusiastic mum and daughter team were coming up with ideas left right and centre, expanding the classes on offer and attracting pupils ranging from toddlers to over-60s. To date, they run around 36 classes a week and have about 120 pupils at their two current locations – Shanklin St Pauls Church Hall and Godshill Scout Hut. 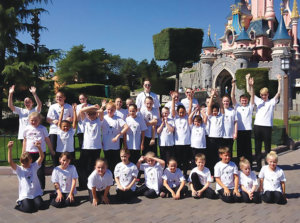 In 2010 they decided they’d like to give dance-mad youngsters the chance to perform on a West End stage – which led to the creation of their second-string company, Class Talent.

They effectively hire a London theatre on a Sunday, when it would otherwise be ‘dark’, and give dancing schools the opportunity for their pupils to perform there, in front of an audience of friends and family.

It’s led to young dancers from the Isle of Wight treading the boards of iconic theatres including Her Majesty’s, The Theatre Royal, Drury Lane, Sadlers Wells,The Shaftesbury and The Palladium – and their relatives getting to see them for an affordable price that just covers the theatre hire fee.

For Linda and Charlotte this is not so much a profit-driven business, but one that gives young dancers and their families a dream experience, and raises money for various charities into the bargain.

Thanks to Linda’s contacts in the dance world, going back over 40 years, she can call on people such as the busy West End star Gary Watson, who travels from London on a regular basis to give his professional insights at dance and drama workshops here on the Island.

She also managed to get well-known stage and TV actress and presenter Julie Peasgood to come on board as the dance school’s celebrity patron, and now Julie and her husband Patrick Pearson visit Shanklin Theatre every year to present the awards at the school’s annual show.

Linda is very clear though that without solid support from her family, none of this would have come about.

She pays particular tribute to the unwavering belief and support of her parents, who passed away on the same date within three years of each other – dad on December 29th 2010 and mum on the same date in 2013.

And of course to Charlotte, the daughter whose belief in her at her lowest point brought Linda back from the blow of losing the hotel.

“I count myself so lucky to have the family support I’ve had” says Linda, “and that’s why our work ethic now in the dance school is ‘family’.  We consider all our pupils and their parents as a great big happy family, and we just love being involved with them”. 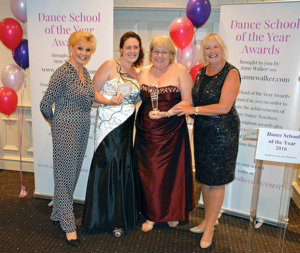 It’s not really a case of ‘going to work’ for Linda and Charlotte when they’re at the school – it’s what they love and what gives them a buzz.

They’re always planning projects, such as the visits to Disneyland Paris, where their pupils will be going for the fourth time this year to dance and perform on the Disney stage and enjoy all the fun of the theme park at a subsidised cost.

Treats like this are offered thanks to all the fundraising done by the school, and Linda’s thinking behind it is simple:

“I know what it’s like to have nothing” she says, “but when I look back, losing the hotel was the best thing that ever happened to us.

“When you’re faced with something like that, you can choose to go up or go down.  We consider ourselves very blessed, and we love the fact that we can work at something that makes other people happy.

“It was our destiny to be here on the Isle of Wight” she adds, “but just not to run a hotel!”