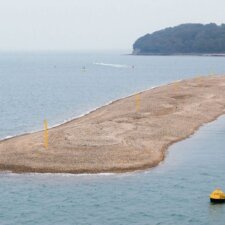 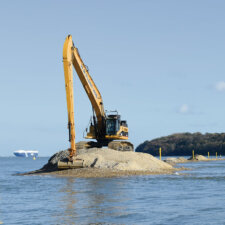 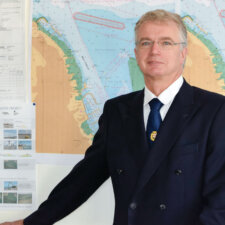 The idea of a protected Cowes Harbour was first mooted way back in 1860. Then some 12 years ago, positive steps were taken to protect the world-famous harbour by working to progress construction on a much-needed breakwater.

In less than 12 months time the project will reach fruition as the massive structure is completed, with the hope it will not only protect the harbour but also prompt further business investment in Cowes, and indeed throughout the whole of the Island.

Currently, when you look out into Cowes Harbour, a long bank of gravel above the waterline stands prominent. But by next September around 40,000 tonnes of granite rock will be placed around the gravel, and the long-awaited breakwater will be fully installed and operational.

I spoke about the £7.5million project to Capt. Stuart McIntosh (left), the Cowes Harbour Master/Chief Executive, who confirmed: “It has been a long-term objective for Cowes Harbour Commission. Cowes, of course, is well-known for yachting and an important gateway for the Isle of Wight. It is actually called a harbour, although the dictionary definition of a harbour is usually a protected, sheltered, environment.

“Cowes Harbour was and is an open estuary mouth. Effectively, north of the Cowes chain ferry, the river mouth faces due north out into the Solent. So, Cowes Harbour’s open funnel-type entrance makes the harbour very prone to strong winds or sea conditions coming from a northerly direction.

“The resulting storms and gales limit the type of development we can have in the harbour, and can restrict the harbour’s use even during the summer when you can still get quite strong northerly winds. Cowes is well known for hosting a series of international regattas throughout the summer, including Cowes Week and the Round the Island Race, but if you get a gale from the north, the sea conditions and wave conditions can become pretty untenable in the outer areas of the harbour.”

The withdrawal of Government funding and a downturn in the economic climate put the breakwater project under threat, so Cowes Harbour Commission (CHC) looked for grant funding support. And in 2012 the Homes and Communities Agency (HCA) agreed to put £3million of funding towards the development, which enabled CHC to go out to tender, and subsequently award the ‘design and build fixed-price contract’ to Boskalis Westminster.

Work began in May of this year, with ground conditions proving extremely challenging. At the eastern end of the breakwater there are some 17 metres of sand and silt to get through before you reach the underlying rock beds.

Capt. McIntosh explained: “Phase One was to build the core of the breakwater, which entailed a 1.5-metre layer of sand and gravel on the seabed as a filter, followed by 11,000 wick drains pushed down through the core to the rock bed below.

“A geo-textile blanket was then put on the seabed to provide a further base before the gravel core was laid. All the gravel material was sourced locally from the Southampton Water capital dredge, which Boskalis also carried out, enabling an environmentally friendly reuse of the gravel.”

Boskalis Westminster has confirmed that the delivered volume of material to the breakwater to date is 51,000m3. The breakwater is 350 metres in length, the base is 45 metres wide and it pyramids up to the total height from base to peak of around 7.5 metres.

Work will resume in May after the gravel core has settled and solidified, and it will be reshaped to its full height before granite rock is brought in from French quarries on 70-metre flat top barges. The rock will be in different sizes to help protection, with rocks being placed all around the breakwater. There will be approximately 40,000 tonnes of rock laid, although settlement and other factors could increase that figure.

Capt. McIntosh said: “All the rock should be in place by the end September, with the whole project completed by the end of October. But we are still working with the HCA to dredge the eastern channel to provide a second deep water channel into Cowes Harbour. Meanwhile, the Shrape breakwater stretching out from East Cowes promenade and constructed in 1937, will also be extended by some 58 metres.”

He added: “Without this protection the outer harbour cannot fulfil its potential. It became clear that marina developers were not prepared to put investment into an outer harbour that did not have protection. Unless Cowes Harbour and the Island continue to invest and improve the services, we cannot be competitive with other ports that are also looking for the business that Cowes Harbour currently attracts.

“It is also about looking for new investment, opportunities and jobs, as well as ensuring we protect our current businesses. The breakwater will provide new potential, a new image and a new look for Cowes, and the majority of comments we have received so far have been positive.”