Home|Interviews|Neil Shutler: ‘Cookie’ Neil is 98 and not out
Previous Next 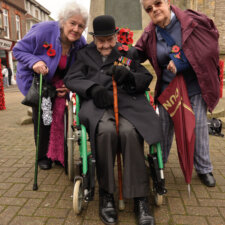 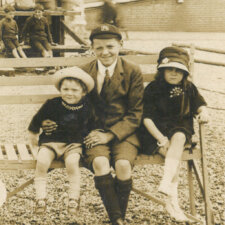 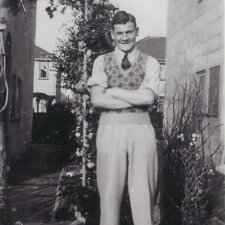 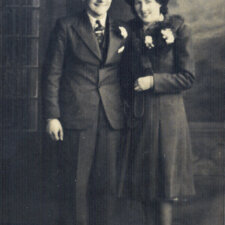 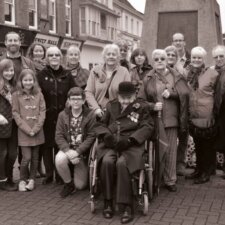 It reads like something from an adventure story: a humble baker from the Isle of Wight being presented with France’s highest military honour.

But this is fact and not fiction, for this summer saw 98 year-old naval veteran Neil Shutler receive the Legion D’Honneur for his part in the liberation of France during WW2.

As one of the men who took part in the D-Day landings of June 1944, ship’s cook Neil received the rare honour as part of the 70th anniversary celebrations, when French President Francois Hollande pledged to honour all the surviving British veterans who took part in the historic campaign.

It arrived at his home in Newport in July as a total surprise to the proud ex-Navy man, but his large family had been in on the secret, as eldest son Paul, 76, had supplied information to the local British Legion about his dad’s wartime service record. 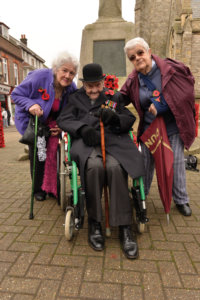 Neil – known to his shipmates as  ‘Cookie’ – was serving on the French-Canadian vessel HMS Oranaise in 1944.  He has hair-raising memories of towing a vessel from Dover on  very rough seas, and of it pitching so much that the crew could see down its funnel. In the end, they had to cut it loose and ditch it for their own safety.

He also recalls the trauma of his Portsmouth barracks being bombed, seeing a man killed by shrapnel, and losing a total of 33 comrades.  “I kept in touch with a lot of my shipmates after the war but now I’m the only one left” he says.

Then there are the memories of taking the Oranaise back to France after the war when it was decommissioned, and says the local people surged on board and stripped it because they literally had nothing.

Though he doesn’t talk much about his wartime exploits these days, Neil has proudly marched with other veterans every year until last year, in the local Remembrance Sunday parade.

This year, at a Memorial dedication in Newport for the people who lost their lives in a German bombing raid on the town, Neil had to use a wheelchair – but he still sported his chest full of medals, with bowler hat and dark overcoat, for the occasion.

Most of the time though, Neil is best known for his mischievous sense of humour and sheer love of life.

With 10 children, 17 grandchildren and a huge wider family all around him, he is never short of company, and is a sharp player of cards, chess and other board games. In fact Sunday is ‘card night’ at his place, with various members of the family turning up to play. 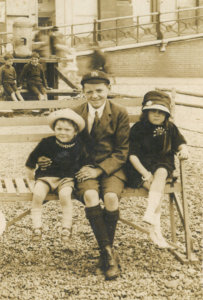 Life didn’t start out that easily for Neil, after he lost his mother when he was only five, and had to be brought up by his grandmother and uncle.  He was sent to Hollingworth College, a private school in London, where his mischievous ways often got him into hot water. In fact when he was threatened with being expelled, he told his grandmother that was okay as it would save her the school fees!

Always more interested in the practical side of life, he admired his Aunt Lizzie who could cook “as good as any of these Master Chefs on TV”.

Anxious to leave school, he worked in a local bakery and then went to work for his older brother Ron who had a chicken farm – but when Ron died in 1936, the young Neil had to re-consider his future, which was why, in 1937 he joined the Navy as a cook.

Between 1937 and 1939, he served on HMS Victory 2 and then Iron Duke before applying for a compassionate discharge because by this time he had met and married the love of his life, Dorothy. 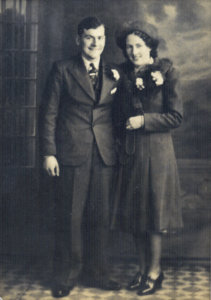 They met on a blind date and the story goes that he hid in a doorway to see what she was like before committing himself.  When he spotted the lovely petite redhead, he had no hesitation about taking her to the Grand Cinema – and says that  after he’d escorted her back at the end of the evening to Whitecroft Hospital, where she worked as a nurse, he looked up at the stars and said “That’s the girl I’m going to marry”.

And marry her he did – although his compassionate leave from the Navy didn’t last long, because he was called up again for war service, just before Paul was born.

Most of his wartime service was in the Solent between Portsmouth and the Island, so he wasn’t too far from home, and his family continued to grow, with second child Dianne being born in 1941 and Marie in 1943.

After the war, it was this money that he used to buy a bakery business in Upper St James Street from Edwin Caddy. He recalls scrubbing the walls, putting in new benches and cleaning the coal-fired oven – a filthy job that had to be done regularly with a flour sack on the end of a pole.

“These TV bakers haven’t got a clue what it was like” he says. “I used to gauge the temperature with my hands – they were my thermometers!” 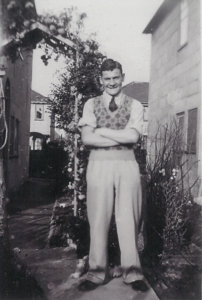 As he built his successful bakery business, Neil would go on to make on average 600 loaves of bread on a Friday night, along with perhaps four dozen doughnuts, three dozen buns and assorted dozens of custard tarts, meat pies, jam puffs and apple turnovers.

With no machines, all the doughs had to be made by hand, in a huge trough.

“I thought nothing of it” he says.  “It supported the family and they all helped out”.

Ultimately, the Shutlers had a huge team of helpers, as the children continued to arrive up until 1958, when Nicholas was born – the second son he had always hoped for, after a run of eight daughters!

There was no State help in bringing them up those days – in fact Neil says one year, he paid more in tax than he received in family allowance.

Despite having such a hectic life at home and work, Neil still found time to pursue one of his other great passions, cricket.  He says the one regret he has now is that his late wife Dorothy (who died in 2005) became something of a ‘cricket widow’, as he played at one time for Newport Second Eleven and for Ventnor, and then when he could no longer play, he became an umpire

At his 98th birthday dinner at The Priory in July this year, many of his old cricketing mates joined the family celebration

His favourite all-time cricketer was Denis Compton – after whom one of his daughters, Denise, is named (she would have been Denis had she been a boy!)

Ever-versatile, Neil even turned author after his retirement, and in collaboration with Val Palmer, wrote about his favourite sport in  “From Cradle to Crease; the memoirs of an Island cricketer”.  Proceeds from the book went to St Mary’s Hospital, and in 1996 he brought out an updated second edition.

When he retired from the bakery, it was taken on by son Paul, who ran it until his own retirement, when it was taken over as a Spar store.

The Shutler retail gene has come out in many of Neil’s children, and at one time there were five of them with businesses on the same street.  Dianne still has Dragonfly, a fair trade gift shop, whilst Elaine trades in health foods and crockery and Marie and Avril have a clothing shop.

All of which is an ongoing and enduring legacy for one man who simply loves living, loves people – and gets through the tougher times of life with a joke and a smile.