Martin Clunes: Clunes in the country

Home|Interviews|Martin Clunes: Clunes in the country
Previous Next

Martin Clunes: Clunes in the country 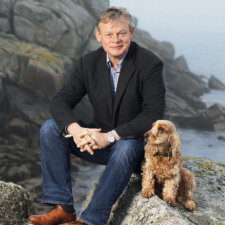 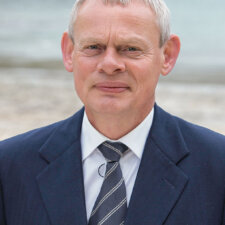 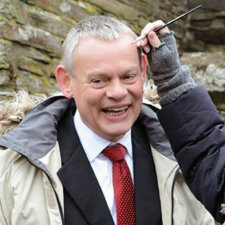 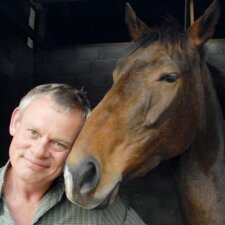 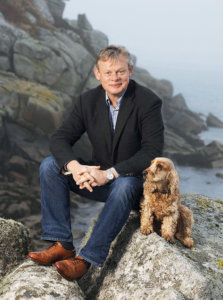 Twenty years on from the testosterone-fuelled idiocy which filled his London flat in Men Behaving Badly, actor Martin Clunes, much like his eponymous Doc Martin character, has swapped the city for the pleasures of rural life.

Known best for his portrayal of Doc Martin’s irritable Dr Martin Ellingham, who abruptly leaves his London practice to become a general practitioner in the sleepy fishing village of Portwenn, Martin Clunes, at first look, shares more than just his name with the good doctor.

But while the idiosyncratic focus of the popular comedy drama settled rather awkwardly into Cornish village life, Clunes himself feels very much at home in the rural south-west.

Now 53-years-old, Clunes grew up in London, attending boarding school for much of his childhood. Deciding to up sticks to the Devon countryside years ago with his second wife, producer Philippa Braithwaite, and their young daughter Emily, the family swapped the stresses of the capital for the West Dorset countryside and never looked back. Now the owner of a farm, with over 130 acres of his own land, you’d be forgiven for thinking that while Clunes may enjoy the rural life, juggling filming, farm work, a family and with over 30 horses to tend to, it must be hard work.

His days may be busier than ever, but Clunes protests that he’s lost the stresses associated with city life; rather, country life has changed him. “Totally,” he smiles. And a world away from his Men Behaving Badly character, who would refuse to commit to anyone or anything beyond a couple pints down the pub, it’s easy to imagine the actor rolling up his sleeves and getting his hands dirty. “Living on a farm is totally engaging and completely absorbing,” he says. “There are animals everywhere. It just defines who we are.”

An enduring small screen success story and prolific presenter, Clunes has firmly laid down roots. Filming Doc Martin in Cornwall, his commute from Devon and back again is arguably longer than a trip on the Tube, but still gives him time to feed the horses, dogs and the assortment of four-legged friends he shares his land with.

That said, the actor does admit that long days on the set can seep into his real life. “I get a lot of criticism in my own home for taking an interest in people’s medical conditions,” he laughs. “Particularly their medications. I always want to know what they’ve been prescribed. My daughter in particular always goes, ‘You’re not a doctor! Shut up!’”

The latest, seventh series of Doc Martin finds Clunes in a particularly tough storyline, going through a separation with his onscreen wife, the long-suffering fan favourite Louisa. While veteran audiences might be dismayed at the break-up, the actor revels in his character’s new state of affairs. 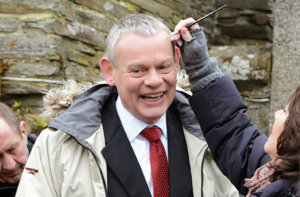 “It’s always much more fun to do something that’s awkward or complicated,” he says. “Otherwise it’s quite undramatic. ‘I love you, I love you too’ and off they go. It’s sort of the opposite of drama. You’ve got to keep it plausible that they do love each other and plausible that they can’t function as a couple. We learnt from very early on that people instantly latch on to this ‘will they, won’t they?’ storyline which we could only play out for so long, which we did – until they had a baby! People always say to me, ‘Come on, get back together’.”

Thankfully, Clunes’ off-screen marriage, to Doc Martin producer Philippa, is altogether different. He stresses, “I don’t get confused between real life and Doc Martin” and the family, settled a stone’s throw from Beaminster in Devon, share a singular passion for the countryside, farm life, and especially for their horses.

“I rode when I was a child,” Clunes nods. “Philippa was passionate when she was younger, and Emily has grown up around animals and has ridden since she was two. So it seemed natural. When we had a house in Dorset with a garden we were constantly looking for a field so we could get a pony for her and we couldn’t find one and then we found this place. Then I got a horse because I realised we could do it all together and it’s taken over completely.”

Now immersed in the equestrian world – indeed, he’s president of the British Horse Society – in 2013 Clunes was able to incorporate work and play for documentary Heavy Horsepower, looking from his own working equines to the traditional role of horses in latter-day Britain and beyond. The show took him to France, Italy, the States and back home, where his love for his own four-legged brood is made clear.

Emily shares her father’s equine love affair, but she’s certainly not interested in following her parents into the entertainment industry. “She tried acting and got bored rigid and moved on. Well done. Mission accomplished,” Clunes reveals with a chuckle. 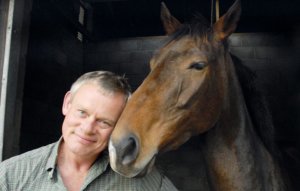 It’s common for actors to hesitate at the thought of their children joining the business, but the younger Clunes has made her lack of acting ambition clear. “She studiously avoids anything we do,” he laughs. “She doesn’t watch Doc Martin. When Sigourney Weaver came we went out for supper at Rick Stein’s and Emily came with us. When I said ‘Do you want to watch the episode?’ she said, ‘No I’m alright.’ Why should she?”

He certainly doesn’t take it personally. Clunes shares a great relationship with his daughter; perhaps it’s the escape that country living offers which is instilled in the family. “I never advise anyone because we’re all different, but I seem to have got pretty lucky – she’s pretty nice,” he smiles. “Also she begged to go to boarding school so a lot of the teenage problems we might have had have been absorbed by professionals.

“I went to boarding school and the thought of her doing the same just broke my heart, but she was desperate to go and it’s been the best thing. She’s an only child and craves the company of her peers and other girls. She’s got a really nice circle of friends.”

Although Emily spends time away at school, the family have ensured that they’re all very much part of the local community. Martin and Philippa founded Buckham Fair, now an annual August Devon institution. There’s a pony and horse show, local fodder, charity appeals and fairground rides at the family-friendly event.

Country living lies at the heart of the Clunes residence, and that extends to holidays too. Looking back at his own childhood, a passion for the life was already fully formed. “I used to go to the Isle of Wight as a kid all the time. I would hitch down there and go camping. I love it,” he says. Today, Clunes has his own transport and another excuse to visit: his older sister lives on the Island. 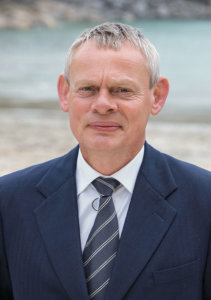 It’s been over five years since Clunes presented the Isles of Britain documentary series, where he started with the Shetlands, travelling south along the west coast and visiting the isles of Scilly, Guernsey and so on. The Isle of Wight being a familiar destination, it would be the perfection location to pick up the series, but with the turn of the year fast looming, Clunes is reluctant to tell what 2016 holds for him. “I don’t have a great deal planned,” he says, returning instead to the subject of his new love. “I’ve been doing really well with big horses – I’ve got two Clydesdales who I’ve started riding so I’m really happy not to work!”

The gorgeous draught horses take priority and a lot of his time for now, but we suspect Clunes won’t be away from our screens for too long. He did find time this year to play Sherlock Holmes creator Arthur Conan Doyle in Arthur & George. Another venture produced by his wife Philippa, the three-part series is based on Julian Barnes’ novel and took him to the Midlands, a set further from home. The actor says he hasn’t ruled anything out though and considering Doc Martin is filmed every other year, all he’ll say on the matter of his return is “we won’t know until the dust has settled”.

Of course Clunes isn’t the only famous person to prefer the rural lifestyle to city bustle. Blur bassist Alex James swapped the rock star lifestyle to pursue an artisan cheese-making business in Oxfordshire, while musician Sting’s Tuscan winery has been in operation for some 20 years.

For Clunes – actor, presenter and now farmer – it’s clear that tending to Britain’s rolling landscapes is more than just a pastime, and as any rural dweller will tell you, there’s always something to be done. Now he admits he sometimes needs a helping hand. “We have adaptable help. If I can fix a fence or something I will, or use the tractor. But obviously when I’m not there we need help. Ultimately there’s hard times at the end and light times at the end.”