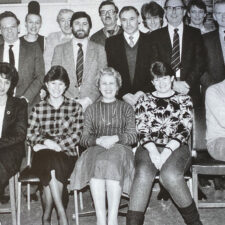 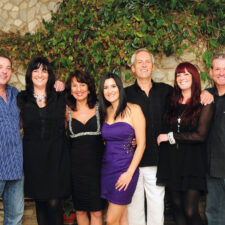 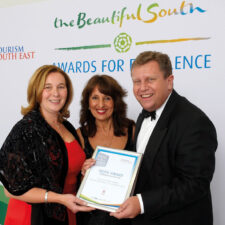 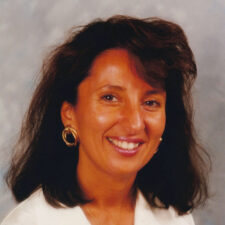 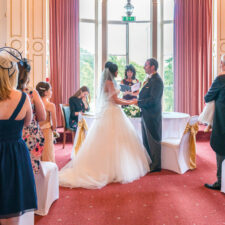 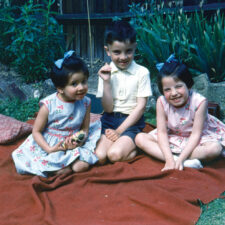 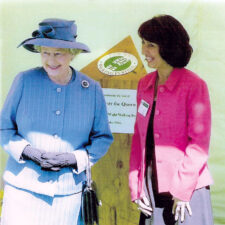 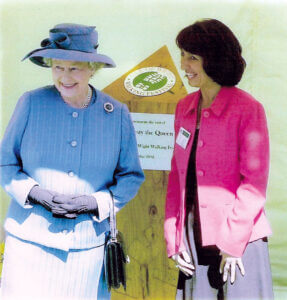 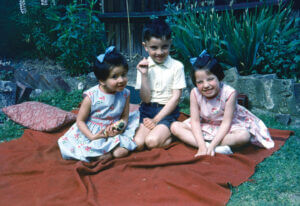 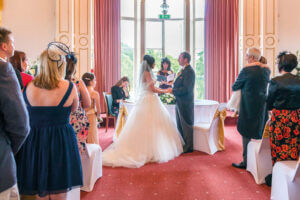 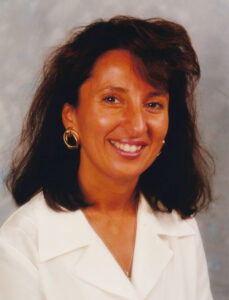 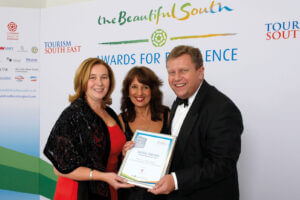 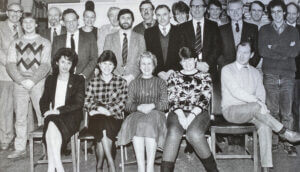 Most people might expect to attend at most a dozen weddings in a lifetime – but as a former Sessional Registrar with IW Council, Elaine Cesar has been at more than 350 of them. Now, having launched herself as an independent Celebrant, she tells Island Life how she came to carve out a role that connects her to people at some of the most poignant times in their lives.

It’s not exactly a job that Elaine was likely to have considered when she was sitting in class as a teenager at Cowes High School in the 1970s – but as she reflects, becoming a professional Celebrant of weddings, funerals and baby namings is the perfect way to blend all the skills she’s acquired during a varied working life.

“I’ve always believed that nothing we do is ever wasted” Elaine reflects. “In a strange way, it all seems to come together and becomes a part of what we finally end up doing”.

This somewhat holistic approach to life is one that she shares with her partner Den Clare – well known on the Island for his work as a Hypnotherapist. “I’d describe it as having a passion for life and for people” she says. “Being open and interested, and being a good listener and observer”.

So, what was the circuitous path that led Elaine to this particular turning point?

Home is where the heart is

The first landmark event was as a seven-year-old, when she moved to the Island with her parents, and siblings Michael and Mimi. The family had fallen in love with the place after enjoying carefree holidays at Gurnard Pines, and Atherfield holiday camps, and decided to up sticks and move across the Solent.

Elaine has vivid memories of moving to the Island from the London suburb of Croydon, the day before her seventh birthday in 1965: “It was snowing and freezing cold, and the removal men, had lit a coal fire for us when we arrived”.

She and her siblings quickly settled in and made friends at Holy Cross Convent school in East Cowes, loving its glorious setting and on-site swimming pool.

She describes an idyllic childhood of feeding the ponies during special studies at Norris Castle, playing in old boats on the Medina, newting at the old reservoir in East Cowes amongst the relics of the old Castle, and hunting for frog spawn at Gurnard marshes.

“We didn’t have a car – we just walked everywhere or hopped on the bus”.

But she says she and her siblings were privileged in lots of other ways. They even got to play in the grounds of Osborne House, and on its private beach just like Royal children, thanks to the fact that their friends’ parents were employed at the stately home.

And during long summers Elaine’s family would host grandparents, cousins and other relatives from the Mainland, taking them to see all their favourite Island haunts.

As a student at Cowes High School, Elaine was still having a whale of a time, hanging out with friends and larking about jumping onto the floating bridge, when late for school – but says she still didn’t have a clue about what she wanted to do for a living.

She had a Saturday job in Crispin’s Shoe Shop in East Cowes, which she loved (and which, she jokes, might explain her current passion for shoes!) and also waitressed at Padmore House. Again, all unconsciously building on her people skills.

Still unsure of her career path, she carried on into the sixth form at Cowes High, but ultimately decided not to go to University – opting instead to work for a few weeks in Richways supermarket, before getting a job at BHC (later to become GKN) in the Wages and Salaries Department as a comptometer operator.

There, she was part of a team making up the wages each Friday, and recalls being escorted by security guards when she and a colleague did the rounds, handing out the cash-filled wage packets to staff in the afternoon.

In those days, the social club at BHC was the go-to hub for people in East Cowes, and Elaine has great memories of playing squash there, attending fancy dress events, parties and celebrations.

In fact, it was such a great place to work that she ended up staying there for 18 years, working up through secretarial levels to technical publications.

“It was an amazing period of my working life” she says. “The company was more like a family, and great fun to be a part of”.

By the mid-90s, though, times were a-changing. GKN had a re-organisation and shed many of the staff, including Elaine, who at the age of 36 found herself at a turning point.

In the event, she returned to study and signed up with the IW College for a two-year HND business and information technology course, passing with distinction. On the back of it, she was offered a place on a degree course, but decided she’d had enough of studying and instead landed a job with IW Council as an Events Officer for a couple of years.

This was to be the start of a whole new path, leading her into freelance events work, a short stint at Southampton’s Mayflower Theatre, and training as an audiologist, before a return to the IW Council events department, assisting with the first IW music festival with Annie Horne and the team. Later she was given another big opportunity – working on the Isle of Wight Walking Festival, which she organised from scratch and which evolved to become the biggest in Europe, featuring 300 walks. “I didn’t even have a pair of walking boots when I started – but I quickly put that right!” she says.

Her other claim to fame is having been personally involved in starting up the IW Speed Dating Walk – which ultimately produced five weddings and a baby.

In the course of her work, she met Royals – including the Queen in 2004 – dignitaries and celebrities, but once again, life was about to take another turn.

After 23 years of working with the Council, Elaine faced another redundancy in 2015 when the Events team was disbanded in a cost-cutting move.

But she wasn’t without work for long, being offered a one-year contract at Osborne House – scene of many happy childhood times – as Hospitality Event Manager, organising weddings and some high-profile corporate events. As it turned out, the one-year contract turned into three – which only came to an end just prior the national lockdown in 2020.

The way of independence

In common with many people, Elaine spent lockdown time doing a serious life review, and in her case, the latest career change emerged almost as a natural next step.

She explains that for five years of her Council employment, she had acted as a Sessional Registrar – a little extra job that she loved doing because it was so “positive and uplifting”. It had prompted her to go on a course a few years ago to train as a wedding and funeral celebrant, and whilst she went on to perform a handful of private weddings and interment of ashes ceremonies, she had not actually taken things any further… until now.

“I’d had everything set up to launch my independent celebrant business five years ago” she explains. “The website – everything. But I didn’t really pursue it until last June, when everything seemed to fall into place and the timing felt just right”.

Of course, bookings were slow in arriving because nobody was allowed weddings or gatherings during lockdown, but that gave Elaine the ideal opportunity to build slowly and surely and conduct a few weddings.  Now, more bookings are beginning to appear like little green shoots of her new enterprise, with baby namings and weddings already appearing on her calendar for the coming months.

She also conducts many funerals. ““A lot of people ask why I would want to do funerals – aren’t they depressing?” she says. “But they are absolutely not. I see them as a lovely way of celebrating somebody’s life, and find it extremely rewarding to spend time with families at what is a very significant time for them.

“Yes, it is a sad occasion, but being able to mark those milestones in the life of a loved one can transform the sadness into gratitude and be quite uplifting for people”.

Elaine also loves the joyful experience of presiding over a couple’s wedding vows – and happily agreed to perform that role for daughter Emma, 38, when she married Ashley in 2017.

She says she loves the process of helping couples to design and create their own bespoke wedding ceremony or civil partnership, incorporating their own personal vows, music, readings and poems, and then bringing it all to life.

Ironically, though, Elaine has still not been married herself. She met her long-time partner Den almost 40 years ago, when he was already dad to four children, Darran, Bernie, Lucy and Nat.

Soon after getting together, she and Den had Emma in 1982, and now have two grandchildren and five step-grandchildren. But there has been no tying of the knot, as she jokes: “Den and I have been happily un-married for 40 years… he says he doesn’t know me well enough yet!”