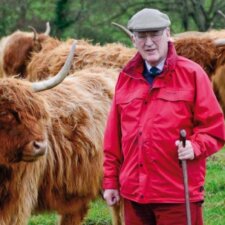 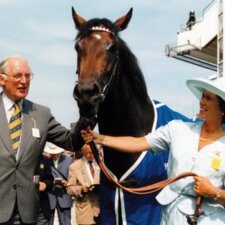 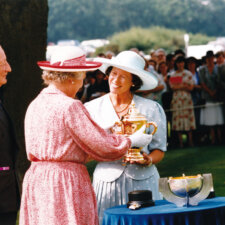 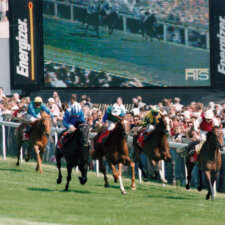 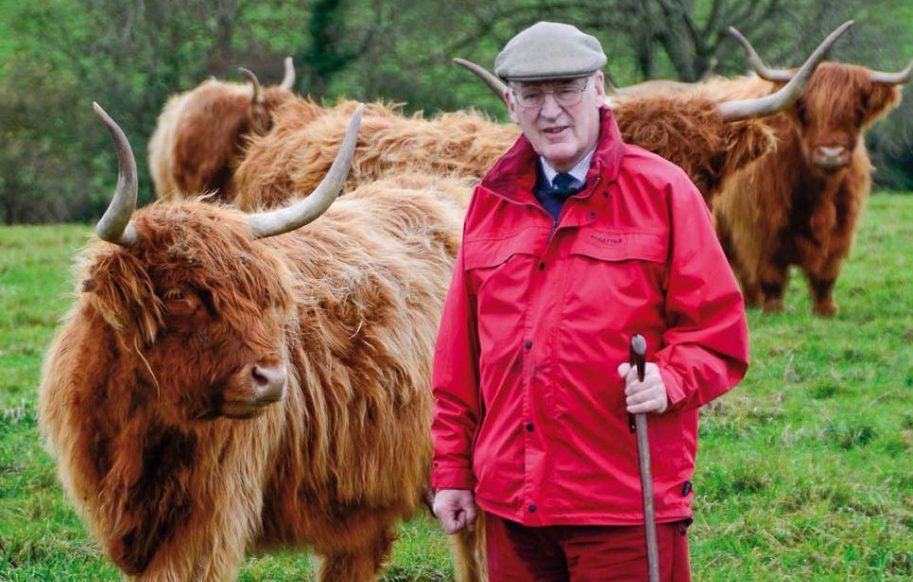 In the second of this two-part special on Michael Poland, Island Life talks to the successful Island businessman about two of the greatest passions in his life – cattle and horses.

On the large acreage of conservation land near Wroxall where he and his wife Carolyn have their Island home, magnificent Highland cattle graze freely, and Michael likes nothing more than to be out there with them, calling to each one by name.

“Both here and at our home in Oban, Scotland I have the freedom to walk out of the door and walk amongst my cattle. I love that and it is important to me,” he said. Michael first bought land at Wroxall in 1998, followed by the farm, and then the farm house. He employed Barry Isaacson as farm manager, and began building and breeding his Highland cattle fold.

“At the time prices were bad, and we were getting about £150 for a steer, so I decided to go pedigree, and at a sale in Scotland I bought a champion heifer, and the bull calf she was carrying. The bull became champion at Oban in 2006, which came as a great surprise. I have also had a number of champions from the fold I bought from Islay in Scotland. I have about 200 head of Highland cattle here on the Island and another 70 in Scotland,” he said.

“We have been very successful showing cattle. The Oban Bull championship is THE thing to go for; it is the one everyone wants to win. I have been fortunate that we won it in 2006, 2008, and then again last year. It is a very historic cup, and only two people before me have won it three times, and one of them was The Queen. I have a very good team around me, which is what you need. Without them I would be lost.

“In 2010, to my great amazement, we also won the Royal Highland Show at Edinburgh with a two-year-old heifer, and we won it again last year with another two-year-old. It is very rare to win it two years running, especially someone from England! It is a very popular show, with about 50,000 people going to it. It is still a real agricultural show.” 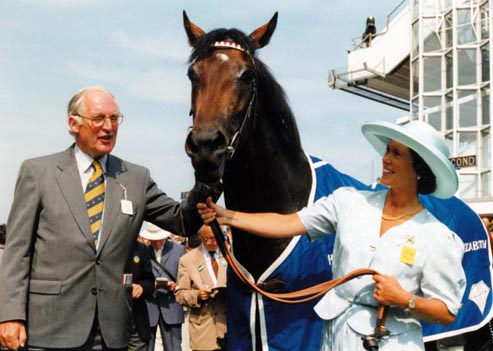 Horses have also been an integral part of his life, and the former Master of the IW Hunt was within little more than a length of part-owning the winner of the world’s most famous Flat race, The Derby.

He recalls: “A horse named King’s Theatre was a top two-year-old, and went into training with Henry Cecil, and we had a top jockey in Michael Kinane. In 1994, as a three-year-old he failed in the 2000 Guineas and flopped in his Derby trial, but I made a case for him to go to Epsom.

“There is only one place to be in the Derby and that is first, and he was leading until just before the finish when he was overtaken by Erahab, beaten by one-and-a-quarter lengths. He was also second in the Irish Derby, but went on to win the King George VI and Queen Elizabeth Diamond Stakes, which was great fillip, but no one remembers who finishes second in the Derby.

“I was still Master of the IW Hunt at the time, so we invited all the Island farmers to go to Epsom for the race. There were 235 of us, and we took two coaches full of food. I chartered a boat to take them over, and it was a very happy day – and if the horse had won I think there would have been a riot!”

Michael and Carolyn have always shared a passion for hunting, and he says modestly: “Hunting is the only thing I can claim to know anything about. When I retired as Master of the IW Hunt in 1994 I would have classed myself as expert. My father had a pack of beagles, and I had my first day’s fox hunting in about 1946.

“When I was 19 I was Joint Master of the Meon Valley and Winchester Beagles, but in 1957 I had a heart operation and the surgeon told me I had to stop beagling, so that was when I started letting a horse do the work for me. Hunting for me was never a social thing, but the art of venery and the breeding of hounds. A horse to me was a method of transport.

“In 1972 I became joint master of the Hambledon Fox Hounds, and then one day there was an advert in the ‘Horse and Hound’ magazine for Master of the IW Hounds, so I applied. I had holidayed on the Island since 1946, so I knew it well, and I was delighted to be appointed sole master. I later took on two Joint Masters, Susie Payne and Harold George, and both became great friends.

“I was Master from 1983 to 1994 and finally resigned the Mastership because I think you need to get out of it before people want you to get out. I probably had the best hunting of my life on the Island. Carolyn was Field Master and supported me 100 per cent. She is a very good horsewoman, and made a great contribution to the IW Hunt. 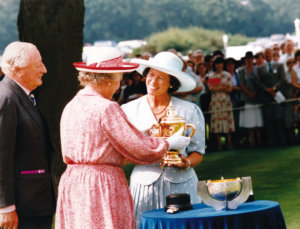 “One of the great things about hunting was the relationship I built with farmers. There are no better friends than farmer friends. I met a great number and am very grateful to them. There is a tremendous bond amongst the farming community on the Island, which you don’t get elsewhere, and I was privileged to be part of it. While I was Master I came over here twice a week, and we had a house in Seaview. Eventually I had to pull it down before it fell down!”

Michael continued: “The fox hunting ban has had a traumatic effect on rural social life. Hunting is not just for toffs – they hunt but so does anyone else. In the hunting field everyone is equal – for people with a great common purpose – and that disappeared with the ban. You can no longer go to a pub and talk about hunting; it has left a huge void. I have met people through hunting, but if I came to the Island now I wouldn’t get to know any of those people. I hope there will be a day when hunting does come back. I was sad and more than slightly annoyed when the ban came in. I can see how some people see it as cruel, but it wasn’t because the end of a fox was very quick.

“I was active in hunting politics and would write in the local papers. I made myself a nuisance, and I founded the regionalisation of the British Field Sports Society, which until then had been central. I said if they were going to deal with problems they had to deal with them on a local basis. I wrote reform articles, and strangely enough people took notice of them and they had quite an influence.

“I was against the wearing of red coats except by officials, and since I retired as a Master I never wore the red coat. Tradition is too strong sometimes, and throttles, and I think tradition throttled hunting a bit, and was finding itself difficult to relate to the public.”

After retiring as the IW Hunt Master, Michael took up horse breeding. “I had a slight introduction to horse racing because Carolyn’s brother in law is Henry Candy, who trains at Lambourn, so I decided to go to the Tattersall’s Sales and buy horses.

“I spent hours studying the Tattersall’s catalogue, and picked out the horses I wanted. Off I went in eager anticipation, but they all went for up to £400,000, bought by the Arab breeders. However, there was a man called Jim Joel who was 94 and having a dispersal sale. He had been very successful, and in the catalogue was a partially blind mare, which I thought no one would want.

“I rang my bank manager, who gave me an overdraft of £20,000, and I went to the sale – and the mare went for £280,000. So I closed my catalogue and said ‘finished!’ But the next horse through the ring called Regal Beauty had good pedigree, but no great class. She had a Shirley Heights (Derby winner foal) so I thought if it is good enough for Shirley Heights it’s good enough for me, and I bought her for £5,200. I later bought another horse, Crystal Spray for £7,000 and both bred Group One winners. 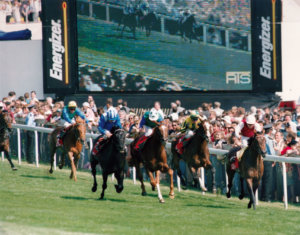 Michael hardly hesitated when asked what if he had to choose between cattle and horses. He said: “Cattle are more important to me than horses. I only have one horse left, because I have had one or two health blips. The colt, Crystal Monarch, is two years old and with Henry Cecil, and I tell everyone it is going to win the Derby. It is bred to win the Derby, a wonderful pedigree and a good looking horse. He has the physique to win the Derby, but whether he has the temperament, we don’t know yet. If we are lucky, and he proves a good horse we will go for the Derby in June.

“I have to say the Highland Show win gave me greater pride than finishing second in the Derby. You are slightly more remote from a racehorse; it is a different type of achievement. Winning the Derby would bring a lot of recognition, but I am not after that, and I don’t like people betting on my horses. I don’t like the idea of someone betting £5,000 on one of my horses, and losing it.”

Michael has had several dealings with the Queen’s fold at Balmoral, admitting he once revealed he wanted to buy one of HRH’s cattle for cross-breeding, and when she got to hear about it she ordered her own stockman to do likewise, rather than sell.

He added: “Shortly after the Coronation the Queen started her own fold of Highland cattle. They are successful breeders, and had three years of showing good bulls. We expressed an interest in one as a yearling, but when we went to see him he disappointed, so we didn’t buy it. We went up again last August to see a bull, but saw another out in the field, and liked him.

“So we bought the bull for £2,000, and I will be very surprised if it is not money well spent. We sold one champion bull last year for £6,000, and we are getting a reputation of quality in depth.”