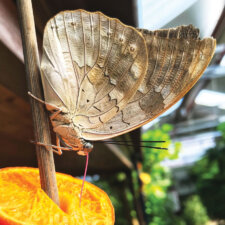 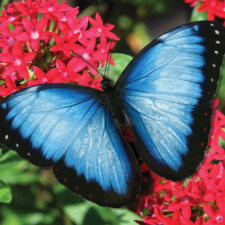 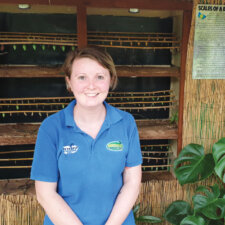 As job titles go, “Butterfly Keeper” is one that’s a guaranteed conversation starter at parties – and  Charlotte Ratsey is one of an elite few who perform this offbeat role. So how did she become a guardian of such beautiful, ethereal creatures?  Jackie McCarrick has been finding out.

She’s always been an animal-lover, so it was no surprise to anyone when Charlotte chose to study animal care at the Isle of Wight College.

But like many of her fellow-students, she might have expected to end up working with somewhat bigger creatures – perhaps farm animals or horses, or even zoo animals – rather than the beautifully delicate winged insects that have been the focus of her care since last November.

When it opened in 1983 as part of the Medina Garden Centre at Wootton Bridge, it was the first butterfly farm to be run in a UK garden centre, and amazingly, only the fifth butterfly farm in the world, with its indoor sub-tropical garden providing a home for free-flying butterflies. 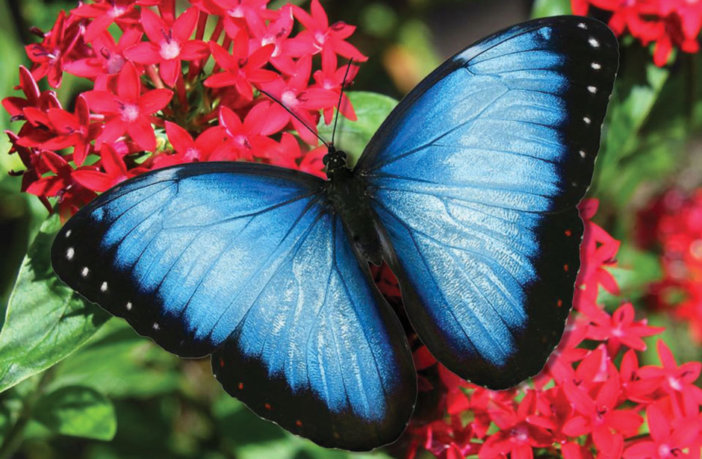 New owners took over in 2018 and have since invested in upgrading the old greenhouse-type building with insulated panels and a whole new electrical system, to create a state-of-the-art ‘Butterfly Heaven’, that basks in 28 degree heat and high humidity.

For Charlotte, as the first-ever dedicated Butterfly Keeper, the past six months have been a huge learning curve, researching different varieties and learning about their ideal environmental conditions.

“The fact that we have so many tropical species and yet can provide the perfect environment for them to flourish, in what is essentially a warehouse on the Isle of Wight, is pretty amazing” she says.

“They’re all breeding so well at the moment that we seem to have caterpillars coming out of our ears!”

Currently, Butterfly World boasts 57 different varieties, all thriving well in their perfectly protected environment – although Charlotte says that the range is likely to expand even further as the Summer progresses.

The numbers involved are amazing, with a “pupa delivery” every Tuesday bringing anything from 100 to 400 tiny chrysalises to the farm.

These come from a specialist ethical distributor in London, who imports most of them from Thailand and other parts of Asia.  But, as the butterflies settle in to their new Island environment, some species are actually breeding well on-site and so may ultimately become totally self-perpetuating.

“I collected 30 of our own pupae in one day” says Charlotte, “and the Swallowtails are becoming so prolific that we may soon become self-sufficient.”

The reason for the huge volumes, of course, is that the lifecycle of a butterfly is relatively short – typically from 3 weeks to three or four months depending on the variety.

The farm’s signature butterfly, used on its promotional materials, is the stunning Blue Morpho, one of the largest butterflies in the world, with wings spanning from five to eight inches, but Charlotte says she’s also fond of the even bigger Giant Owl, with its uniquely striking wing spots.

Her absolute favourite, though is the Emerald Swallowtail, named for its dramatically luminous green and black wings. 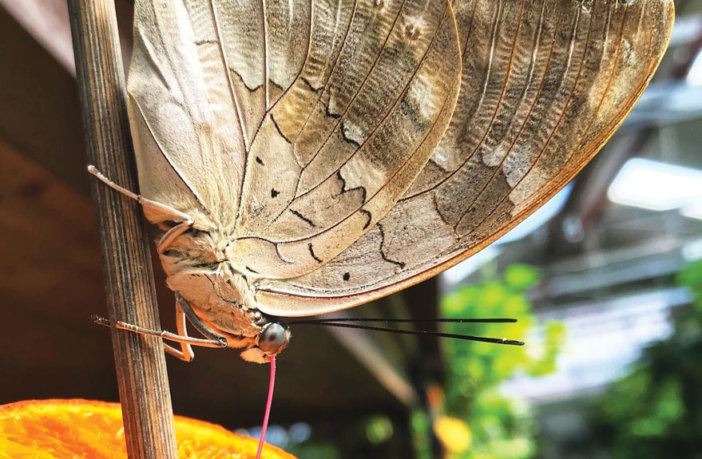 The size of this particular butterfly means that there’s a high percentage of ‘emergence failure’, becauses the new butterflies literally have to fight their way out the the chrysalis, and sadly, not all of them will make it.

“Some do struggle to come out so we do get some crippled butterflies, which we tend to keep behind the scenes” says Charlotte.

At any one time, there can be a mind-boggling 800 – 1,000 butterflies flying around the place, although this number is expected to rise to as many as 2,500 over the summer months.

The reactions of visitors are amusing to watch – and Charlotte admits that she always enjoys hearing the constant waves of ‘ooohs’ and ‘aaaahs’ that filter through to her office.

Feeding time is also popular, when Charlotte and the staff take out colourful bowls of fruit two or three times a day.  Visitors are sometimes perturbed to notice that the fruit is over-ripe and often even verging on rotting – but the fact is, that’s just how the butterflies like it!

Charlotte, who spent the first five years of her working life as supervisor at Colemans Farm Wildlife Park in Porchfield (until it closed in 2014) subsequently worked at West Wight Alpacas before taking on her role as queen of the butterflies.

She has her own fond personal memories of the original butterfly farm, which she remembers visiting as a child and says: “I’ve been lucky to come in right at the start of a new era for Butterfly World, which makes it  really exciting and a great personal challenge.

“It hadn’t been updated for a long time so there have already been big changes – and we’ll be continuing to develop things, so watch this space!”