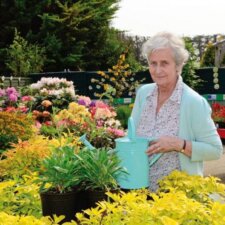 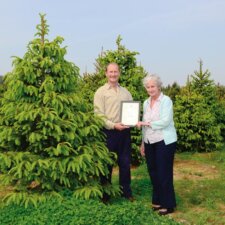 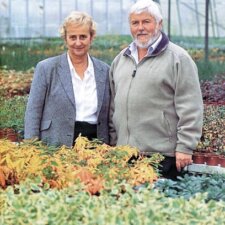 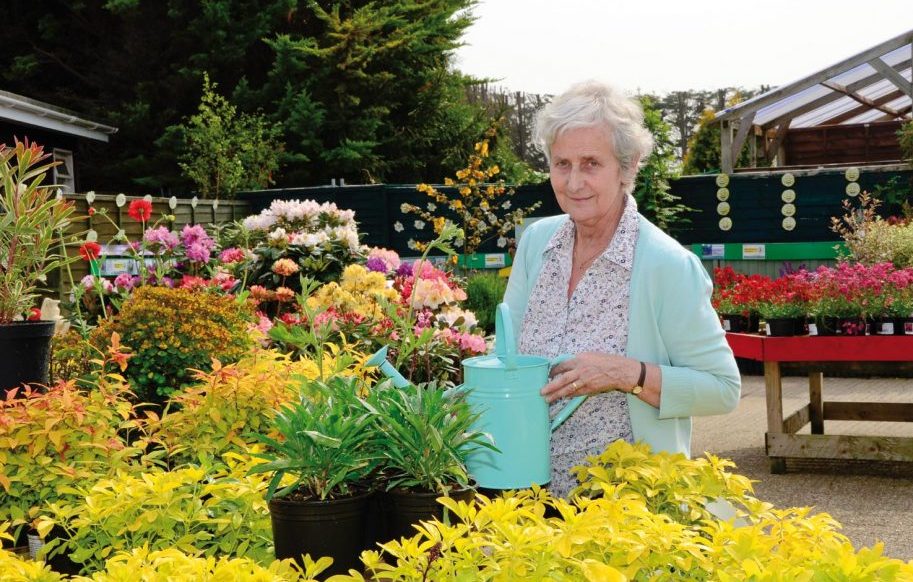 In the final part of the series we tell how Mrs. Thompson and her late husband David built their Garden Centre empire – including the one at Newchurch – from very humble beginnings.

David and Ursula Thompson met through their local church, where David played the piano for the children at Sunday School, and she was one of the Sunday School teachers.

Mrs Thompson recalls: “I trained as a nurse at Guy’s Hospital, and that was the way I expected my career to go. But then I met this very handsome young man at the church, who happened to be David.

“We got to know each other, and he decided he would like to marry me when I finished my nursing. He was totally honest with me, telling me he was trained in horticulture and wanted to own his own nursery business one day. He said that if I married him it would be a lot of hard work, and I would have to be alongside him. We married in 1962.”

Although having been warned Mrs Thompson did not envisage the hard work involved, as David acquired derelict sites and converted them one by one into highly successful Garden Centres and nurseries.

“David had tremendous vision, says Mrs Thompson. “He saw derelict places and said we could do something with them. Our first site was in Petham, a village just outside Canterbury, the main road went between Canterbury Cricket Ground and the M20, so it was quite busy.

“It was a two-acre site with a very old house. Two sisters had lived there sometime beforehand, and although there were a few apple trees around, the rest of the ground was pretty much barren, apart from brambles. 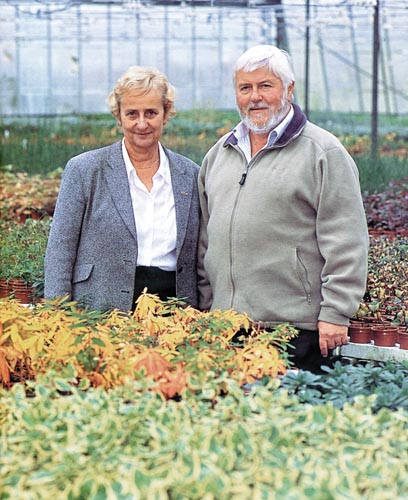 So in 1976 we began the task of clearing the ground, winching out trees, and building our own poly-tunnels. It was an amazing challenge and very hard work.

“David was still working at Wye College, and would come back in the evening to start building the nursery and I was also doing three nights’ nursing, so we were both working day and night.

A lovely old guy named Bill Wood, who lived nearby, came across with his tractor and helped us clear the ground. We grew vegetables, bedding plants and flowers, we started by just selling them from out of the garage, and selling tomatoes from the front door.

“Bill helped us a lot, but didn’t want paying. He just wanted some fresh vegetables and flowers every week, and he would take them and share them with the old people in the village. He also had an area of land, which was absolute wilderness but he said we could use it for growing shrubs, and that is how our shrub nursery began. We called it Woodlands after him – Bill Wood! When he died we discovered he had left the land to us in his will. He was a lovely chap, and when he came out of hospital he came to our home and I nursed him for 10 days before he died.”

Ursula and David begged hardcore from passing lorries, and then shovelled it by hand into place to make a car park at the nursery. They later took over another derelict site at Chislehurst in 1982, with David again realising the potential. Over the next few years Welling garden centre and a large production nursery was added. This mainland nursery of 2.5 acres of glass produces the autumn and summer bedding plants for all our five garden centres.

Thompson’s are now celebrating 20 years of being at their Isle of Wight Garden Centre. David’s parents moved to the Island when they retired because his uncle was Rev. Arthur Thompson who was the Congregational Minister at Newport.

Mrs Thompson explained: “He went to Guyana as a missionary, and then returned to settle on the Island, so David’ parents retired to Bembridge. As my children grew up we came to Bembridge for summer holidays, so we knew the Island very well. When the garden centre here was in the hands of the receiver, we were in Canterbury and David said we ought to come and look at it.

“Again the site we took over here was rundown and needed a fresh start, gradually over the years it has grown into a very popular plant centre. My husband used to see potential in sites that were either abandoned or derelict and make something productive and beautiful of them. He had tremendous, vision and worked so hard. He was absolutely amazing,” said Mrs. Thompson. “David was the grower and I was the retailer.” 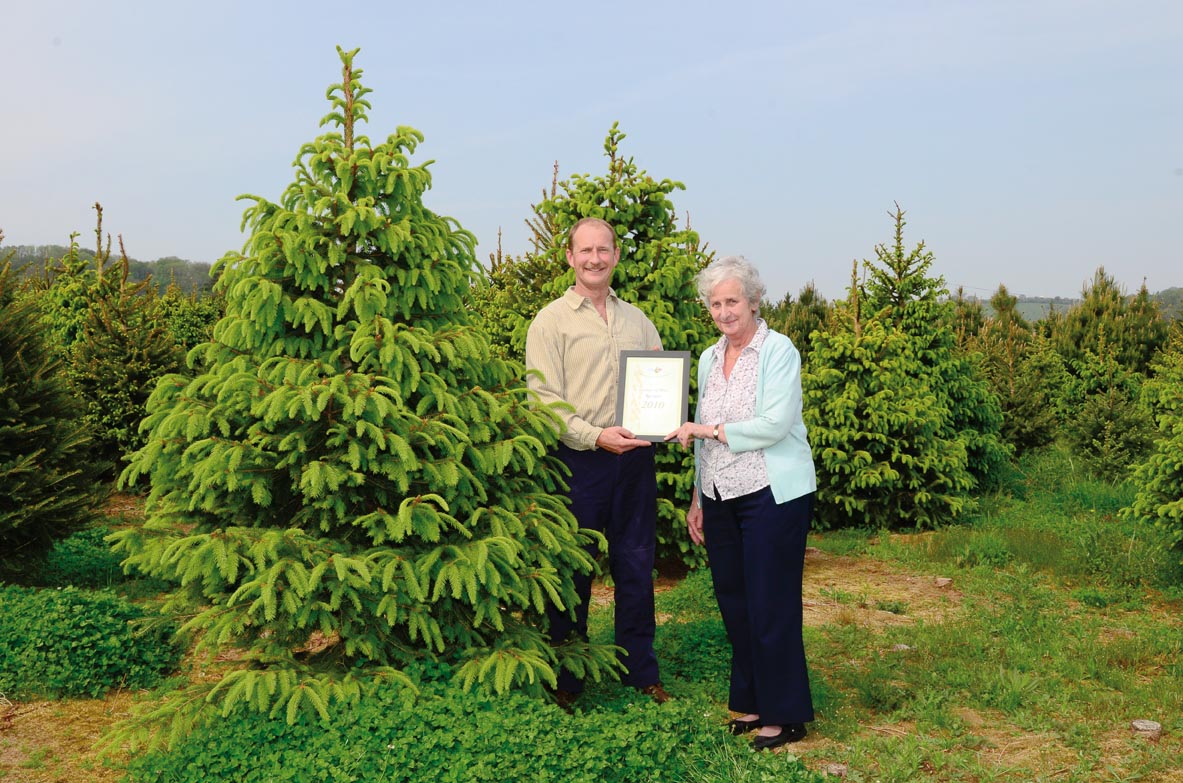 Four of the Thompson Garden Centres are on the mainland, including one near Windsor and one at Welling, Chislehurst and Petham, Canterbury. As well as the Garden Centre at Newchurch, there are also three nurseries here, where all the herbs, alpines, perennials and specialist plants are grown for sale.

Incredibly around 300,000 plants a year are grown by the company from cuttings at our propagation nursery on the Island. Once potted the small “baby plants” are sent on to the shrub nursery at Canterbury to grow into 3Litre shrubs and climbing plants, before being distributed around the various garden centres. Some of the baby plants are grown on at our other two nurseries on the Island.

Thompson’s Garden Centre also took over the Shide Christmas Tree on the edge of Newport site in 2000. The trees are grown on a 10-acre site, and sold just before Christmas each year on the adjoining site. A year later they acquired 100 acres of land at Knighton, and began planting Christmas trees there.

Mrs Thompson recalls: “David was on the tractor and I was passing him the plants. The first year we planted 40,000 trees, and it takes about seven to eight years to produce good sized trees. We now plant each year 20,000 trees, as well as 1,000 pot grown trees to sell as a living tree. Our Island grown Christmas trees are now sent to our other four garden centres on the mainland, as well as supplying Shide Christmas trees and our garden centre at Newchurch.”

“David’s main ‘mission statement’ was to grow in our own nurseries 90 per cent of all the plants that we sell at our Garden Centres and source the rest from British growers. Our customers should be looked after and served by knowledgeable staff to ensure the best possible customer service.”

Sadly, David passed away in July 2008, aged 67.  Mrs Thompson added: “The Knighton site was a wonderful legacy that he left us. He worked so hard throughout his life, and he loved that site working among the Christmas trees. He was more or less in semi-retirement, but was out there with the birds and the animals, and that is what he wanted.”

Peter Alexander is the senior manager on the Island. He now oversees the three production nurseries here and runs the Christmas Tree Farm and Shide trees.

Mrs Thompson added: “David would have been thrilled to know that in 2010 one of our Norway spruces was awarded ‘Best Spruce’ by the British Christmas Tree Growers Association.”