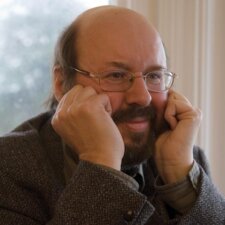 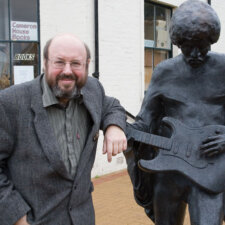 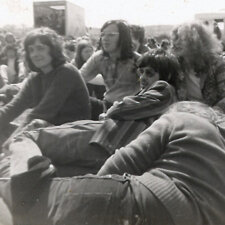 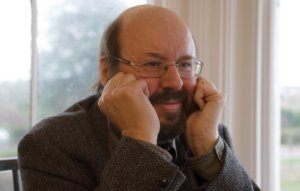 There’s something a bit rock and roll about Brian Hinton.
And it isn’t just that controversial Jimi Hendrix statue outside his beloved Dimbola Lodge at Freshwater, of which he is curator.

Brian, 56, might look like a fusty academic on the outside but on the inside beats the heart of a maverick. He’s the librarian who helped inspire the rebirth of the Isle of Wight festival; the poet who writes books on some of the greatest rock legends; the property millionaire for whom money’s not that important. Brian was brought up in the Highfield area of Southampton and says he has always had a rebellious streak. “I was a swat but I’ve also been a rebel. I’m bald now but believe it or not I was actually a haircut rebel. At school I was sent for an enforced haircut because the headmaster said if I didn’t toe the line he wouldn’t sign my papers for Oxford.”

At Oxford Brian was free to grow his hair ‘right down my back’ and made the most of everything on offer, from following the hedonistic Sixties music scene to running the Oxford Poetry Society where he hosted evenings with W H Auden and Ted Hughes. As so many students of his era did, he’s sampled a few joints in his time, “I’ve even inhaled with a sheikh,” he said. Now his views have changed, Brian now thinks that – however fashionable – even soft drugs are extremely harmful when taken on a long term basis.

“Of course I had no idea what I wanted to do in life so I became an academic researcher and went and did my MA and my PhD.” He then got a traineeship at Oxford’s Bodleian Library where he developed a love of rare books. “I had this wonderful year when I didn’t really have to do anything except study and look at these fantastic books. One day I was given a huge book bound in wood and iron to carry across the road to an exhibition room. When I got back I said ‘what the hell was that?’ ‘Well, it’s a Gutenberg’, they said. It’s one of only two in the world and this is the finer one.’ It was worth millions. It was priceless in fact.”

It was also at Oxford that Brian had his first brush with death – an experience which would influence the path of his future career. He says: “I got nephritis, a kidney disease, which very nearly finished me off. It made me realise early on that life is short and you’ve got to enjoy it. It was also then that my father made it clear to me that I would never have to worry about money in my life. He was an estate agent and had invested in properties to rent. I’d never be really rich but neither would I be poor and that has freed me up to work in the public service and not worry about how much money I earnt.”

Brian left Oxford to do a two-year librarianship course at Birmingham during the 1977 Punk explosion. He says: “Having been through the summer of love when everyone had flowers in their hair and then ten years later being able to see all those punk bands taking off – The Clash, The Damned, The Stranglers – was wonderful.” 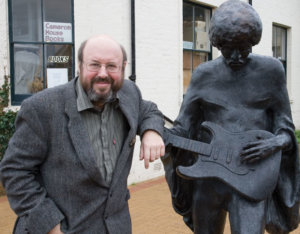 Brian returned to Oxford but after a decade of academic life he was getting tired of it. “I’d had enough of academia and all the back-biting. I saw an advert for a job at Freshwater library and gallery. I thought how lovely it would be to have a couple of years back where I went to that wonderful Isle of Wight festival. It really appealed to my romantic side but it was seen as career suicide by my bosses at the time. One of the people at the Bodleian said, ‘Is there a University in Freshwater?’

“When I said no, it was a public library, he was aghast. In terms of career I should have stayed for two years to become a chartered librarian and gone back into university libraries but I loved the Island and the peace and quiet. It gave me a chance to finish my PhD and start writing poetry.”

Brian spent 17 years working for the library service, building up its collection of rare books and reinvigorating the Island arts scene. During this time, memories of attending the 1970 Festival never left him. “I came to that festival with my old boy scout tent and I loved it. I saw The Doors, Jimi Hendrix, Janis Joplin. I was knocked out by it and when I returned to the Island I researched and published a book about the festivals called ‘Nights in Wight Satin’.

“I would not let those festival memories die and I ploughed a lonely furrow trying to drum up interest. The Isle of Wight Council for the Arts put on a small festival in 1990 with Boy George and Captain Sensible but it lost money. Years later John Giddings (organiser of the current festivals) rang me up for a copy of the book and at the time we had already republished it as “Message of Love” to tie in with the 1970 video and double CD of the festival and basically the whole thing went forward from there.”

Four years ago Brian was reminded again of his own mortality when he had a heart attack. He was nursed back to health by his partner of 19 years, Eileen. Sadly, Eileen was diagnosed with inoperable cancer not long after Brian’s recovery and he looked after her until she died three years ago. “I miss her terribly. I’d like to write some poetry to celebrate her life but I still can’t do it.”

Brian now has a new girlfriend, Laurie, whom he met at a poetry recital at Dimbola and they have been together for six months. “She told me I descended on her like a vulture. She read this amazing poem she’d written herself and I was smitten.” Sitting on numerous library and arts committees might not seem very rock and roll but like Paul McCartney and Bono before him, Brian was honoured in the New Year’s lists this year. “At first I felt very embarrassed but then I thought Eileen would have loved it, even though she was an Irish republican, and my mum would have been very proud. It would have been churlish to turn it down.” 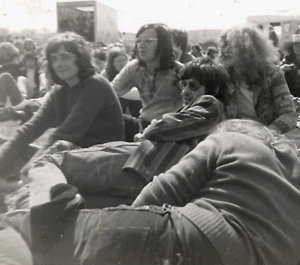 For several years now Brian has suffered from panic attacks and knew he couldn’t cope with going to Buckingham Palace to collect his MBE. Instead, all his friends and family gathered at Dimbola. “As far as I know, it was the first time an honours presentation has been held in a place associated with the person receiving the award.”

A. That’s difficult. I’ve got 10,000 vinyl albums and 5,000 on CD but if pushed I’ll say Mighty Baby by Mighty Baby. They’re a very obscure psychedelic group who played the 1970 festival. I saw them reform and play the Borderline Club in London just a few weeks ago and the lead guitarist is a friend of mine.

Q. What’s your favourite restaurant on the Island?

A. Joe Dafloe’s in Ryde. I love their pasta and it’s a nice place to take Laurie but you’re not looking at a man who goes out regularly.

Q. If there was one thing you could change in your life what would it be?

A. These panic attacks I get. I can’t fly. I can’t get in a plane and I would love to travel. I have had all kinds of therapy but nothing’s worked so far.

Q. If you won the lottery what would you do with the money?

A. I don’t do the lottery and as I am a millionaire already just… well I suppose I’d probably give a lot of it to Dimbola really.

Q. Is there anything you haven’t got in your collection that you’d like to own?

A. An original Burne-Jones painting. He was one of the great pre-Raphaelite artists – very romantic and mysterious.

A. Kissing and cuddling.

A. Life On Mars, The Prisoner, Football and all those wonderful Rock programmes on BBC4.

Q. Who would you invite to your dream dinner party?

A. Mrs Cameron who owned Dimbola Lodge just to find out what she was really like. Anthony Minghella as I think he’s a real visionary and a lovely and brilliant man. Bob Dylan although I’m sure he’s a miserable old so and so. Shakespeare to find out what he was really like. Tennyson because apparently he was actually quite a laugh in private life. Diana Rigg as I’ve always loved The Avengers.

Q. If there is one person in the world that you could ask one question, who and what would it be?

A. I’d like to ask Jimi Hendrix what happened. I still think his death was very suspicious and he still had so much more to give.

Q. How do you think other people see you?

A. Well I was known as the Screaming Lord Sutch of the poetry circuit. I nearly knocked one poet out at a reading in Exeter when I got rather over exuberant. I think people know me as an amiable eccentric.

Q. What would you say was your worst feature?

A. Laurie would say my grooming. I don’t smell or anything I always wash but I’m not very interested in clothes and fashion.

A. As a good writer.