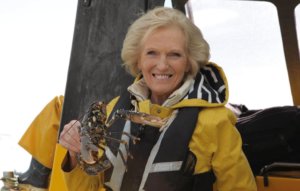 Recent visitor to the Island and Great British Bake Off star Mary Berry discusses her life in the spotlight and reveals how she stays fit and healthy – despite all those cakes!

Eagle-eyed Bake Off fans will have spotted national treasure Mary Berry recently making friends with some Island crustaceans, as she filmed an episode of her new show Foolproof Cooking in and around Ventnor at the end of 2015. Now on air, Foolproof Cooking shows Mary going out on a fishing boat with local Ed Blake, whose family owns Ventnor Haven Fishery. The fisherman helped Mary catch lobster before she transformed it into a delicious treat, served with aioli and asparagus. At the time of Mary’s visit, Cheryl Blake, who runs the fishery, told a local paper: “I enjoyed working with her, she is a lovely lady and good fun.”

Home cooking and baking has enjoyed a massive resurgence in recent years and that is thanks in part to TGBBO and Mary herself. Born in Bath, the 80-year-old TV presenter and cookery writer – who has penned over 70 books – has encouraged people to rediscover the delights of good old-fashioned home cooking.

Since its first series in 2010, Bake Off has rapidly become the nation’s favourite, most-watched programme and Mary found herself in the glare of the celebrity spotlight, but she says her experience of fame has generally been very positive. “I am hugely grateful for everything that I have and what The Great British Bake Off has done for me,” she says. “Everyone I meet is lovely to me. Just the other day, a couple of young lads came up to me and asked for a photograph – they were probably not even 20. But they did because they were big fans of the show, and they were so nice and respectful. I enjoy that.”

With an astonishing career spanning six decades, Mary has become a role model for many, both young and old! When asked about the secret of her success, Mary attributes this to the care of her husband Paul, who she has been married to for 48 years.

“I have a wonderful husband who has supported me in everything that I have done,” she says. “Paul actually quite likes it when I am out and about and working hard.

He encouraged me to take the job as a judge on Bake Off. He is happy that I am busy, as long as I remember to come back home every once in a while! But even though I’m busy we make it work, we make time to see each other. I think that we respect each other and we enjoy doing things together. It’s a life of sharing. I couldn’t bear to be without my husband.”

Despite being in her ninth decade, the queen of cakes still shows no signs of slowing down and hates the idea of a lazy retirement. “You’ve certainly got to keep active,” she says, “and the best form of keeping active is walking, if you possibly can. Get out there in the fresh air, go and help people, be part of your village or your area and look after your neighbours. Don’t just watch television.”

As something of a fashion icon, thanks to her jazzy Bake Off outfits, Mary reveals how her trim figure is thanks to exercising moderation in the face of all those delicious cakes. “I eat well,” she says. “I have a balanced diet but eating well means that my body is full of the things I need. I don’t add sugar into any food. I know that I am lucky to be so fit and healthy at my age; many of my friends and peers are not so fortunate. Good genes are a big part of that, I think.”