Becky Guile: Becky is riding on crest of a wave

Home|Interviews, On the water|Becky Guile: Becky is riding on crest of a wave
Previous Next

Becky Guile: Becky is riding on crest of a wave 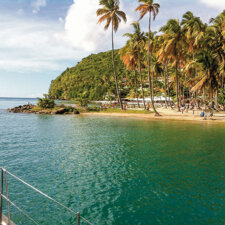 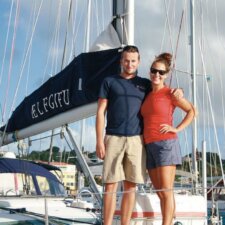 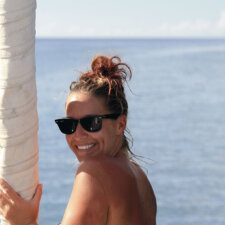 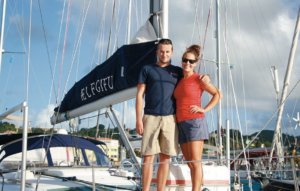 A former Cowes dental nurse has put a smile on her own face by completing a trans-Atlantic adventure, just months after taking up sailing seriously for the first time in her life.

Becky Guile was part of a six-strong crew that took part in the gruelling 2,700-mile nautical Arc Rally challenge from Gran Canaria to the picturesque Caribbean island of St Lucia. With hundreds of yachts of all shapes and sizes milling around them, Becky and the crew, which included her partner and skipper Dean Pettipher, overcame a few anxious moments before completing the crossing, and also picking up an unexpected prize by finishing a very creditable seventh in their class.

Becky admits sailing was the last thing on her mind until she met Dean, who worked on tugs on the River Thames until he wanted a career change and came to the Isle of Wight to study for his Ocean Yacht Master. She smiled: “Dean and I lived very different lives, until we happened to meet by chance in a Cowes pub. After he passed his Ocean Master qualification he was offered the captain’s position on yacht ‘Ælfgifu’, a 10- year-old Beneteau Oceanis 473, registered from Portsmouth, sailing around the Mediterranean.

“Then the owner decided he wanted to start a charter company based in Elba, Italy. I was offered the stewardess job so I completed a course in marine cooking and gained some sailing experience out on the Solent.”

Then came the opportunity to compete in the Arc Rally on Ælfgifu. Becky said: “Just preparing was challenging enough – 21 days of food, plus emergency supplies just in case! The start was fantastic. Hundreds of yachts all pushing to get in front. We held back a little then picked up great speed through the start line, with dolphins swimming right beside us. Everything was pretty straightforward, until days four and five – which were days from hell! 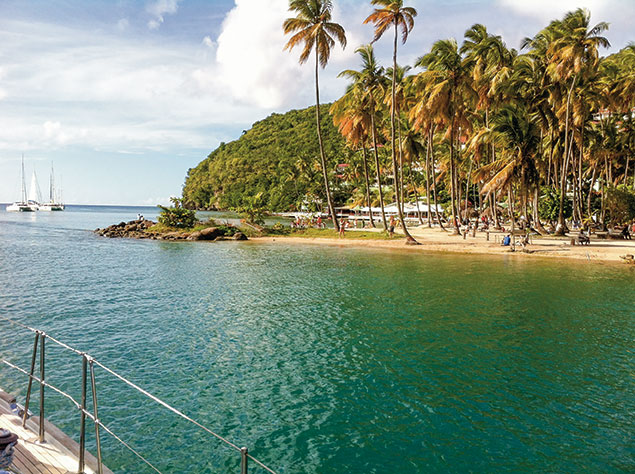 “We headed into winds which made it very uncomfortable to sleep, and our cabin was what I can only describe as a human washing machine. So two days without much sleep equals grumpy crew, but on the plus side we made great headway. We then sprang a leak in the forehead cabin, which was of course ours. It was a case of holding up towels to stop the water coming in, while others were on deck trying to find where the leak was coming from and sealing it.”

Becky continued: “One of our dreams was to see whales, which we did, and they were an absolutely incredible sight. We also tried our luck at a spot of fishing and caught a mahi mahi, We filleted it and cooked it up for dinner – you can’t get it much fresher than that.

“We had a watch system for the crew members of three hours on six hours off. The cooking, cleaning and general boat checks were also rotated around so that everyone had an input into the daily running of the yacht. My favourite watch was the evening/early morning one. I saw massive meteor showers that were so bright they lit up the whole sky as if it was a lightning storm.”

Towards the halfway point of the race near disaster struck when the water inlet pipe came off the engine, and the bilge pump stopped working so the only option was for the crew to bale out. Becky said: “We called the coastguard just to inform them of our position and situation. They contacted the Arc and all other yachts where informed of our problem. We had it resolved in an hour or so by being calm and working well as a team. Lots of other yachts contacted us to see if we were ok or needed help, which was so comforting. The one good thing about doing the crossing with the Arc is that you become one big family and everyone is looking out for one other.”

Although there was some time for sun bathing, on one occasion flying fish also caused a minor problem when they began landing on deck, hitting one of the crew straight in the face. But Becky reckoned: “Overall the elements were pretty kind to us the whole way. We had a few squalls hit us but this just gave us an extra push from the winds generated from these.”

After 18 days at sea, ‘Ælfgifu’ arrived in St Lucia in darkness, but there was still one mishap to come. Becky added: “We hit a fishing pot two miles from the finish line. No one would ever see these in the day let alone at night! The rope got caught right round our propellor. We managed to move into the marina slowly without being towed which would have been highly embarrassing. 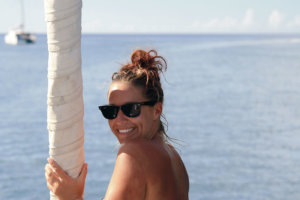 “When we arrived we were greeted by other finishers cheering and clapping, which is quite emotional. When on land a very well earned rum punch was waiting for us. St Lucia is an incredible paradise and was worth every day of sailing to get to. Finishing seventh in our class was an incredible achievement for us. We learned so much and met the most amazing friends for life.”

The crew have subsequently been sailing around the Caribbean for the past few couple of months before they return to Elba for the start of the 2015 charter season. Becky reflected: “Being out on a yacht is a beautiful, breathtaking, unforgettable and wonderful experience. Everyone should try it some day.”