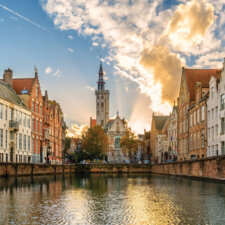 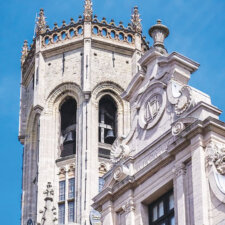 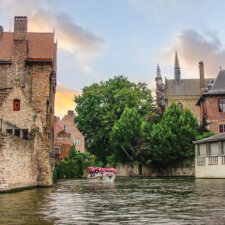 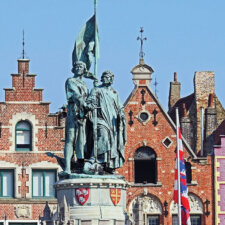 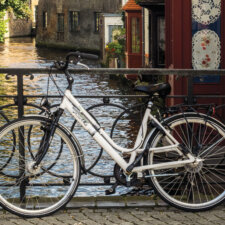 When considering a short break away, I wouldn’t hesitate to recommend a trip to Bruges – and for so many reasons. This wonderfully atmospheric city is an outstanding example of a medieval historic settlement, with a wealth of Gothic constructions dating back to past centuries when it was known as a commercial metropolis right at the heart of Europe.

For our four-day trip, we had booked a small family-run house offering bed and breakfast in a side street off the main town square. On arrival we were given a warm welcome and offered a  very welcome drink, having spent several hours in transit from London, through the Channel Tunnel to Brussels and then having picked up a local connection to Bruges. Our hosts were keen to ask about our interest in visiting Bruges and wanted to point out all the attractions we might visit. They were particularly proud to recommend the historic city centre, which is registered as a Unesco World Heritage site.

The weather was set fair for the following days and we planned our itinerary to ensure we could sample the very best that Bruges had to offer.  A visit to the central market is a must for its striking belfry and its array of the most wonderful paintings.  This is hardly surprising as Bruges was the birthplace of a whole school of Flemish painters, whose works date back to the Middle Ages. There is a wealth of fine dining options as well as relatively inexpensive little places.  I was determined to sample the local mussels, which in some restaurants are clearly defined as the “infamous mussels from Brussels”! These sought-after delicacies are served in various types of dishes but my good friend and I decided to simply order a bucket of mussels each – assuming that the term “bucket” would simply mean a miniature-sized bucket to be delivered onto the restaurant table. Nothing could have been further from the truth though, as the waiter arrived with two fairly large-sized metal buckets which were set by the side of our table on special stands and served hot in white wine and with plenty of freshly-baked bread on the table to supplement the dish. This was certainly quite an undertaking to consume, but I believe that part of the idea behind the volume of the dish is based upon the fact that you need plenty of wine to wash it down! However, it was quite delicious – although we were left with very little room for any other food that day.  Whilst a dessert was out of the question on this occasion, we were determined to return to the restaurant area later to sample the most magnificent desserts on display, including local pastries and chocolate dessert specialities.

A trip to Bruges is not complete without a horse and trap ride through the city centre, and that experience is so popular that we had to book our trip two days ahead. The carriages are beautifully prepared with cushions and rugs to place over you for warmth, and a 30-minute trip is well worthwhile to simply take in the various patterns of streets and canals and open spaces.  The horses are fitted with mess collectors so that horse droppings are not a problem on the old cobb led streets, which are kept beautifully clean.

For me Bruges offered a step back in time: waking up each morning to the clatter of horse and cart throughout the cobbled streets along with the sound of a series of clock chimes and carriage and bike bells was pleasantly atmospheric.

The hire of bikes is popular so my good friend and I decided to take a cycle ride for an hour whilst our ladies were preparing for an evening out. Not being quite the cyclist enthusiast that my friend is,  I was a little concerned as to how far we would be travelling and whether it was within my constitution to undertake all this before dinner.  As we set off with these wonderful large bicycles with wicker baskets attached to the front and large bells, which proved a necessity whilst weaving in and out of tourists walking around the cobbled streets, we set off through the city centre and out through the side of the canal.  I called to my friend “where are we going?” to which he replied to my horror “we are just nipping down to Zeebrugge (which is the sea port of Bruges) and back”.

At Zeebrugge there was a chain floating bridge from the Bruges side and my friend decided it would be rather splendid if we undertook this. As we approached the entrance, there was a sign in French which stated that owing to necessary repairs the floating bridge would not be in operation. I am bound to say I was somewhat relieved that we would not be venturing any further as it had taken us almost 45 minutes to reach this point and we would be most certainly over our time when returning to the cycle shop to return our bikes. However, the journey was entirely flat and manageable and quite enjoyable, although it really tested my fitness levels in terms of trying to keep up with my friend ahead of me.  We paid the cycle man his fee for two hours usage and returned to our hostelry to prepare for dinner which had been booked in a local restaurant.

We had been able to find, again in one of the side streets, a small beautifully presented restaurant seating up to no more than 30 people, and by the time we arrived it was almost full. The proprietor who welcomed us in at the door showed us to our table amongst a very lively buzz of conversation, interrupted by laughter and the clinking of wine glasses.  Immediately we sat down an announcement was made in a loud voice by the owner in French that the restaurant was now closed as everyone had arrived and so one of the staff was appointed to lock the doors. It was a fascinating and an interesting evening as although we were all offered different types of menus and wine, it was clearly part of the experience to all dine together and all leave together!  I recall the quality of the fresh vegetables which complemented a host of various fish and meat options.

The following day we attended the Cathedral and Belfry Tower with its 366 steps up to the bell tower itself, which offers the most extraordinary view over the city.  We also explored many of the Listed Buildings, which had amazing architectural and historical features.

Our final day was a canal trip which should not be missed.  Again locals were keen to offer us guidance and to point out all the various constructions and works undertaken in maintaining the World Heritage Management Plan that began in 2012, and which looks at not only preservation but also the historic urban landscape around the area.

Without a doubt, Bruges is a city that left a huge impression upon me – and a strong desire to visit again in the future.