Back on all paws with Island Referrals

Home|Countryside, Local business|Back on all paws with Island Referrals
Previous Next

Back on all paws with Island Referrals 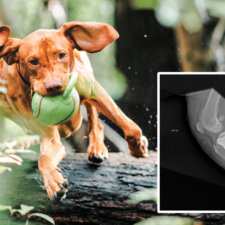 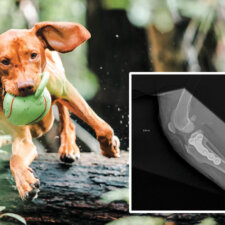 Question: What do dogs, footballers, rugby players and athletes have in common?

Answer: They rupture their cruciate ligaments.

It’s such a common athletic injury, but not surprising when you look at how intensely sportsmen (and dogs), jink, jump and even crash into one another.  Once the ligament is injured, it gets more prone to damaging itself again, meaning that even if it initially settles down, over time a sprained ligament can progress to a full tear – with ongoing joint pain and a limited ability to take weight through the injured joint.

Cats, and some small dogs, with cruciate ligament rupture can sometimes eventually heal enough without surgery, but larger dogs usually need an operation.

TPLO [Tibial Plateau Levelling Osteotomy] is an operation known to give the quickest recovery with a low complication rate. It is also immediately strong enough to be done on BOTH back legs at the same time – if needs be.

TPLO can be done as a day-procedure at Island Referrals (based at Island VetCare) by a dedicated and experienced team led by a Royal College-recognised Specialist Small Animal Surgeon – meaning no long trips to the mainland, no stressful overnight stays. Just in, done, and home, with peace of mind for you.

If your dog has ruptured a cruciate ligament, ask your vet to refer you to Island Referrals, see below for our contact details.