Home|Interviews|Ursula Thompson: Amazing escape in the Blitz
Previous Next 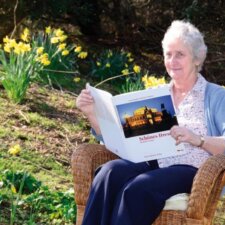 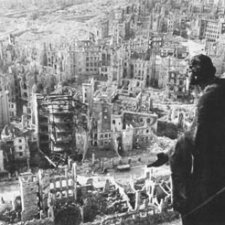 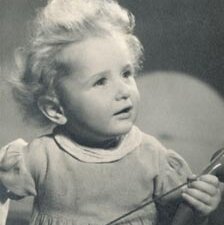 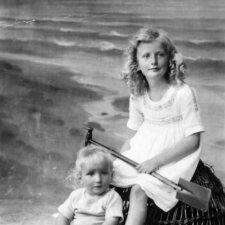 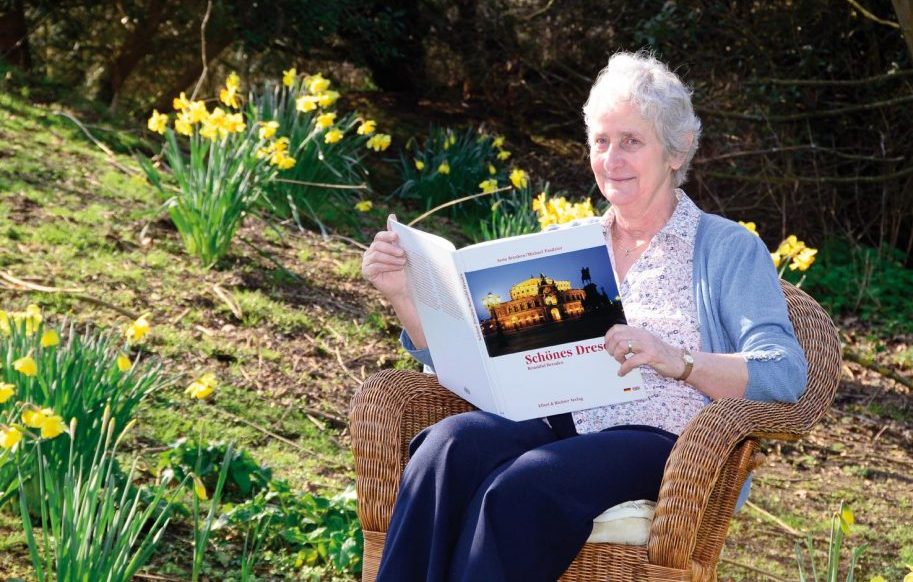 Mrs Ursula Thompson was just a baby in her mother’s arms as the bombs fell around them – not in England, but Germany. Real-life story!

As Ursula Thompson walks among the thousands of plants and shrubs she carefully nurtures at her Island Garden Centre near Newchurch, she sometimes pauses to reflect on how lucky she is just to be there.

Mrs. Thompson’s life has been quite remarkable, yet it so nearly ended even before it began. And again when she was a babe in arms she went desperately close to being one on the many innocent victims of the atrocities of the Second World War.

but this is no ordinary story of a family who dodged the bombs and shells that fell around them time after time. Mrs. Thompson, her parents, two brothers and one sister were caught up in the conflict of the war not in England, but in Germany.

As she was so young, she may never have known anything about what really happened, but for a detailed account, which her mother Dorothy Dadd wrote, of the awful happenings. The graphic, 5,000-word report spans 19 pages and was carefully and painstakingly composed on an old typewriter.

It is never far from Mrs Thompson’s side, and along with a comprehensive report she has since written from stories she was subsequently told by her mother, it makes an intriguing story of not just strength and good fortune, but also of hostility and heartbreak. 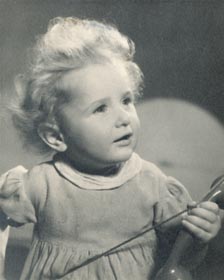 Before the war began Mrs Thompson’s grandfather Edward Dadd – a First World War prisoner – was sent to work in Germany by his London-based engineering company. While he was there he met and married Elfrida, and when he occasionally returned to England he would always holiday on the Isle of Wight.

The couple had four children – Mrs Thompson’s mother Dorothy and three boys. One of the boys could not settle in Germany and fortuitously returned to England. Dorothy became an art student, and met her husband Gunther Ranft in Germany, who ultimately refused to fight in the war because of his England wife.

The family lived in Berlin, and Gunther worked renovating buildings, mainly churches. So when the war came instead of fighting, he was assigned to drive ambulances and other vehicles, picking up the pieces and trying to repair the damage that the bombing had caused.

Mrs Thompson takes up the story: “My mother was expecting me when the first bombs were dropped on Berlin, and our house was badly damaged. Fortunately, the family were away visiting relatives in Leipzig. When my mother returned and saw the devastation she was determined to re-build the home because no one knew how long the war would last. Some of the people my father worked with helped to make the house good again, so they were able to return to Berlin to live.

“But the bombing raids began to come more regularly, and when the family went to visit relatives in Eisenberg there was another major attack on Berlin. My father went there to see the devastation, and carry out his clearing up work. When he saw my mother the following day, he told her never to go back because the house had been totally flattened. If we had been there everyone would have been killed.

“We were homeless, but an aunt who lived in Dresden, had some apartments. She told my mother to go there because the area was quiet and peaceful, and had not been affected by the war, apart from the fact wounded soldiers were being treated at a military hospital. There was also a good maternity unit so her baby – who was me – could be born safely.”

The family went to Dresden where Mrs. Thompson – Ursula Ranft – was born in June, 1944. No one ever thought Dresden, generally regarded as the Florence of Germany, would ever be bombed, because it was virtually a refugee centre.

Mrs Thompson continued: “Even so my mum was getting concerned and started to store food. She had a hand truck, which she kept in case we had to flee, and she could use to carry belongings.”

Then in February 1945, Dresden became the target of a major bombing campaign, which was later to be known as ‘The beginning of the end of the Second World War’. Mrs Thompson said: “My elder brothers Michael and Ferdinand and sister Barbara had become frightened by the sound of airplanes, which were the British reconnaissance flights before the bombing took place. 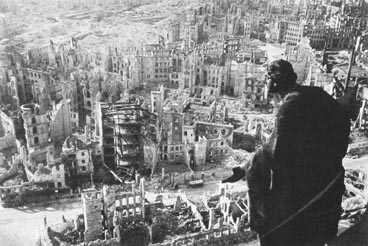 “My eldest brother Michael, who was 10, told my mother he couldn’t stand it anymore, and it was time to get out. As it happened his wisdom saved our lives. The bombing of Dresden began on February 13, and my mother told me bombs were falling all around. She took us down into the cellar, and was then up all night trying to put out fires with wet towels. She had seen it all before in Berlin.

“The following morning when the bombing had stopped, my mum decided we had to go. She put tins of food and other pieces in the pram, and sat me on top. My brothers and sister had the hand cart, and as we left they found a huge unexploded bomb just outside the door. If it had gone off we would have all been killed.

“As we left the apartment there was devastation all around, and we were now refugees on the road. That night Dresden was bombed again, and my mother watched from afar. She described it as ‘an incredible but horrendous sight’. It was like a fire storm. There were flames everywhere and the sky was lit up by the bombing. We were so fortunate that we were safe yet again, but hundreds of thousands of other people had lost their lives.”

As the family continued their escape they often had to throw themselves into ditches on the side of the roads as airplanes flew overhead. The tiny convoy stopped for food wherever they could, and slept the same way, as they headed for relatives in Eisenberg. They eventually arrived in the town after several days of travel, and stayed there for some time, feeling safe in a place that was not a prime target.

As the war finally began drawing to a close the US Army made their way to Eisenberg, and stayed there for several months.  Mrs Thompson’s mother was so fluent in English she was able to chat to them. At the same time her husband was urging her to get back to England as soon as possible, and he would join the family when the war had finished.

She continued: “After some time we were taken to the Russian occupation forces zone of the town, and that was when my mother made a brave decision to try to get away. She was a strong and very determined person and managed to get a message to her brother in England. He travelled to Germany with a reconnaissance group, and made arrangements for my mother to fly home in an army transporter plane. My mum used to say her brother was a bit like a British spy, but I never really knew.

“My mum and my two brothers got out first, and set up a home for us to go to in Brixton. My sister and I remained in Germany for another month or two, being looked after by my grandmother and other relatives. We eventually flew out as well, and I have vivid memories of the plane journey, and the room where we lived in Brixton. If you looked out of the window you could see the big railway viaduct that went across the main road – and of course is still there.” 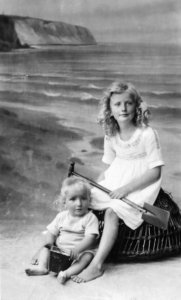 So the amazing escape was complete, apart from the fact Mrs Thompson’s father was still in Germany. He had promised to follow the family to England as soon as he could, but nothing was heard of him for more than a year. His family thought he was in a prisoner of war camp and would eventually be released, but then news filtered through from Germany that he had been killed just before the end of the war when the truck he was driving was blown up.

Mrs Thompson recalls: “When we were back in England it was quite difficult because my older brothers and sister had strong German accents. There was a lot of antagonism and questions were being asked as to why this ‘German’ woman was living in Brixton with her children. We later moved to Orpington, which had a lovely Methodist Church nearby, and they were very kind to us.

“We were accepted – not as a German family, but as a widow with four children. I often thought about how God had protected us; saved us from several disasters, and how fantastic the British Christians had been to us with their kindness.”

Mrs Thompson believes that because she was the youngest she was not affected by what had happened as much as the rest of her family. Her mother had to swear allegiance to the King, and her brother Michael did National Service in this country, during which time he found it so stressful he had a breakdown.

“I remember my sister saying she was travelling on the train to go to school one day. She still had a strong German accent, and a lady sitting opposite got up and slapped her round the face three times for the three family members she had lost in the war. We had had nothing to do with the war, just as English children didn’t, so really we were the innocent victims,” she said.

“I was lucky. I did all the normal English things that you do and had a lovely childhood. Later I met my husband to be through the church, and a totally new life started for me.”