Home|Interviews|Roy Eales: A wheely good time had by all!
Previous Next 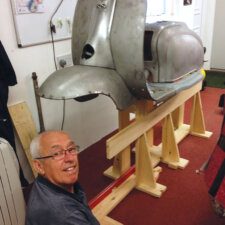 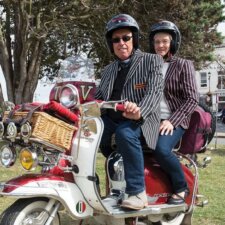 The Isle of Wight Scooter Rally was another roaring success this year, attracting over 5,000 scooters to the event. 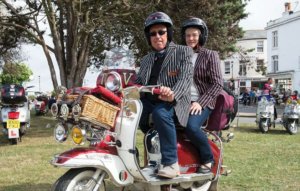 Amongst the thousands of devoted scooterists were retirees Roy and Carol Eales, who travelled almost 250 miles to the Island from their home city of Sheffield, Yorkshire.

Not that the couple drove the scooter all the way from Sheffield – they sensibly brought it on a trailer!

We asked Roy, a 68 year-old retired  ex-coach driver, why he and Carol chose the Isle of Wight when the Brighton scooter rally would be closer for them?

It’s a classical event, epecially with the ride-out. Personally, I wouldn’t care if the ferry was three times the price, we’d still come over to the Isle of Wight!”

Roy and his wife have been involved with scooters for many years, and Roy still recalls the early days when he caught the bug. “ Carol took the view many moons ago that if you can’t beat them, join them” he said.

Asked if she feels safe sitting on the back with Roy, Carol said: “It’s like sitting on an armchair, but just cruising along – its lovely.” 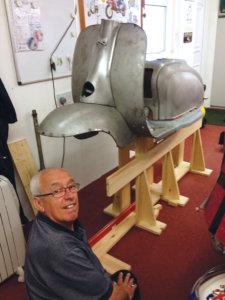 Roy and Carol come for 7-10 days for the event and make a holiday of it, staying at Hermitage Farm in Chale.

Roy said “We ride out round the Island every morning from the farm, stopping off at different places to have something to eat, and just taking our time.  At our age we can’t go fast anymore! We took a trip out to the Steam Fair at Havenstreet, and anything else that takes our fancy, it’s just 10 days of riding and eating, I suppose.”

Roy has had the passion for scooters since the age of 16, when he was part of the original Mods and Rockers scene. “It was fantastic” he said.  “In those days we watched Diana Ross, the Four Tops, Temptations and Stevie Wonder all live, as at the time we lived down the road from a large Social Club, and of course in the 1960s most of these artists who are now legends were gigging round the northern clubs trying to make ends meet as they couldn’t make a living in the States.”

Roy has no plans to retire from his scooters anytime soon – in fact he’s just bought another scooter to restore, a Series Two, which he wants to restore to look like the exact scooter he owned when he was 17. “I hope to be here next year on that scooter” he says, “so fingers crossed that I don’t hit any problems with it!”