A trip to the Bahamas

Home|Travel|A trip to the Bahamas
Previous Next

A trip to the Bahamas 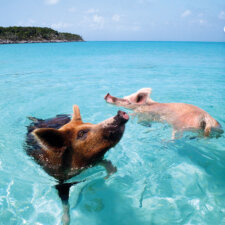 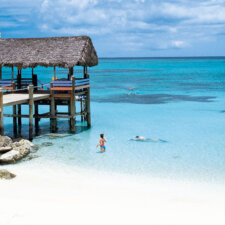 Discovered by Christopher Columbus in 1492 the Bahamas represent a truly enchanting place to visit, with over 700 islands and cays in a star spangled archipelago, writes Terence Willey.

It would be a challenge to visit them all in a lifetime and it was our intention during our two week stay to ensure that our base would be situated within reach of the capital island of Grand Bahamas and its capital Nassau where we flew direct from London.

We had chosen to stay in the region of Exuma Cays on the island of Great Exuma and within easy reach of the neighbouring Islands of Little Exuma and Long Island. The flight was a little under an hour in a small 10 seater plane and I will never forget our departure. The plane was scheduled to leave at 6.30pm from a very tiny departure building where a small refreshment area was provided. As we had arrived some two hours before our scheduled departure we decided to sit and relax and take a drink after our long flight from London, pending our announcement to board the plane. To my absolute amazement we were called to the plane almost immediately. When I enquired as to why we were leaving early I was told that as everyone on the flight had turned up the captain had decided we should leave, which was helpful to him as he had evening commitments back in Nassau!

The minute we touched down in George Town our adventure began. The people were most welcoming, vibrant and very happy and clearly their way of life, whilst simple, was totally aware of the paradise where they lived. The various colours of the sea were simply breathtaking and to experience the region to the fullest, no matter how long you stay, you must take to the water to explore.

The Tropic of Cancer runs through the island of Little Exuma and we were able to stand on the location line itself as we looked across towards Long Island and the various Islands known as Cays. These varied from a few hundred feet to a few miles square with some boasting the most wonderful properties developed by the rich and famous. In the hundreds of miles of sea and the numerous Cays I was fascinated as to how development was able to take place in respect of transporting materials, food and provisions. Sea plane, helicopter and luxury boat ownership is common with no land accessibility and it can be seen why this area has so much appeal to those famous people wishing to escape from their daily pressures. Construction and running costs are very high on many of these islands, and there is a necessity to provide permanent generators for electricity and desalination plants for the water supply. The area is a paradise for snorkelling and scuba diving with one particular famous dive sight known as the ‘Blue Hold’; described as a white sandy ocean bed in about 40ft of water with a 100ft hole around it reaching depths of over 200ft. Within this area numerous fish can be seen along with spiny lobsters, eels, lion fish, crabs, sea turtles and stingrays on their journey underwater through the area. 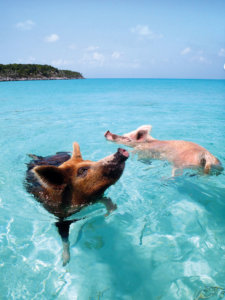 Perhaps one of the most unusual excursions was to observe sea swimming pigs. I could hardly believe what I saw as this short excursion took us to a remote island where we anchored off with a dozen or so more visitors to await the arrival of the pigs.  We were advised by our boat captain that some years past a handful of pigs had been abandoned and left to their own resources on this uninhabited island.  Not only did they survive, but increased in numbers and quite extraordinarily ventured into the sea for food. We waited patiently and then to my amazement two or three large pigs appeared on the beach, who clearly were used to being fed at certain times from this boat trip, and quite extraordinarily they swam from the beach, about 50 yards, to the edge of our anchored boat to be fed. Some of our party decided to swim with them, but I was more than fascinated just to watch their antics and in any event did not relish taking to the water with them!

Perhaps the most fascinating area of all is the Exuma Cays Land and Sea Park, the first of its kind in the world and an international heritage area. Within these boundaries are various small Cay islands, but for me the most fascinating of all were the sandbars, where vast areas of sand suddenly appear in the middle of the ocean and where you can literally step out of your boat on to what appears like a desert in the middle of the ocean. It is said that visitors regularly appear with chairs and tables to wine, dine and swim without any fear of the sand being covered! However with the mean temperatures averaging around 30˚C and with no shelter, it was a hot bed for sunburn.

I can only describe my experience to the Bahamas as an unforgettable one giving me a lasting memory of unbelievable sea colours and what appeared to be a never ending vista of islands surrounded by sea life. I believe Lewis Carroll summed it up in his poem as follows:-

“Will you walk a little faster?” said a whiting to a snail, “There’s a porpoise close behind us and he’s treading on my tail. See how eagerly the lobsters and the turtles all advance! They are waiting on the shingle – will you come and join the dance?”