Matt Legge: A passion for the land

Home|Countryside, Interviews|Matt Legge: A passion for the land
Previous Next

Matt Legge: A passion for the land 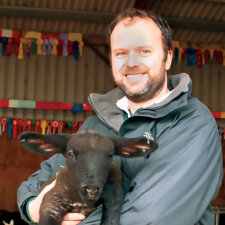 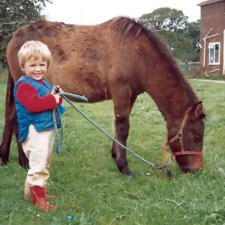 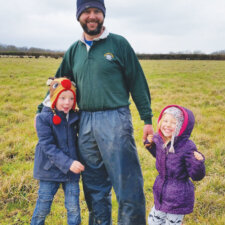 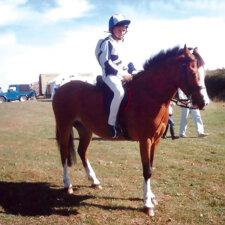 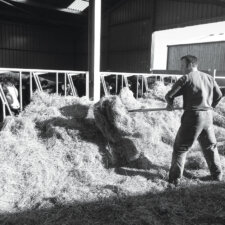 Farming isn’t just a business for Matt Legge – the rural way of life literally runs through his veins. It’s a passion, his main hobby and a genuine source of pleasure and enjoyment. Which is just as well, because as the Island’s newly appointed Chair of the National Farmers Union, the 38 year-old father of three is now powerfully placed to help guide the local farming community through the challenges and opportunities of the Brexit process. We caught up with him as he tended one of his pedigree flocks at Quarr.

Most children love storybooks featuring idyllic adventures running around the countryside, riding horses and feeding farm animals – but for Matt and his brother Simon that was real life.

The family home was Brickfields Horse Country, which was developed as a successful tourist attraction by their late father Philip, a farrier and accomplished horseman whose roots were in rural Herefordshire.

When they weren’t at home on the Island around the horses, the brothers would spend lots of time with their Legge relatives ‘up country’ around Pencombe and Bromyard, who counted livestock farmers and butchers among their ranks.

“Though dad was actually a farrier by trade” says Matt, “all our Island neighbours were farmers and we spent so much time with the relatives that I suppose you could say that, yes, farming was pretty much in the blood”.

So it was hardly surprising that after passing his A-levels at Ryde School, Matt decided to study agriculture at the De Montfort University in Leicester.

“I moved off the Island for a change of scenery” he says, adding that he also considered changing his working ‘scenery’ for a while, contemplating a job in the marketing department of the Mars Corporation.

But it was to be the disastrous Foot and Mouth epidemic of 2001 that indirectly brought him back onto a more familiar path. He explains that he had planned to take a year out after Uni and enjoy spending some time preparing for the season’s point-to-point riding events – but Foot and Mouth put paid to that, with the whole year’s events calendar being abandoned.

“I’d finished Uni to get the horses ready for the racing, training them out on the field” he says, “so when it all fell through I thought : ‘well, I’d better get a proper job then!’”

It was at that point that the NFU just happened to be advertising a position at its Island insurance office, and Matt says it instantly sparked his interest.

“I was curious to find out more about the connection between insurance and farming, and when I was offered the job I thought maybe I could do it for a couple of years” he recalls.

As it turned out, within 18 months, Matt was running the agency, and he actually ended up doing the job for 10 years.

It was in 2009, after the untimely death of his father at the age of 57, that Matt found himself with some pretty hefty responsibilities for a young man of barely 30 years old.

As executor to his father’s estate, Matt took over the running of Brickfields, which he ran until its sale in 2013. During this time, Matt resigned from his insurance job but was offered a part time role with the company, as a locum agent.

“I was very lucky to be able to do that” he says, “as it allowed me to save up a bit and build up the farming side while I was still working”. He only finally left the insurance job in December last year.

Building up the farming included developing the buildings and land at Duxmore Barns whilst taking on various tenancies, including 105 acres of farmland at Quarr Abbey, plus ‘various bits around the East Wight’, now totalling around 350 acres. All the land is managed grassland, for his herd of 120-140 Angus cattle and three pedigree flocks of Jacob, Suffolk and Welsh Mountain sheep.

As time has gone on, the sheep have become a hobby as well as a business, and Matt clearly enjoys showing his award-winning animals, as well as taking his turn as a competition judge, which he describes as ‘great fun’.

His Duxmore flock of Suffolk sheep have consistently scooped interbreed awards at top events including the Gillingham and Shaftesbury Show, and New Forest and Hampshire Show, as well as many Isle of Wight County Shows over the past decade.

“It’s a lovely community on the show circuit” he says. “We’re all friends as well, so it’s a bit like a holiday when we get together.”

What with the farming, a growing young family and the NFU role taking up more of his time and attention, something had to give, and in Matt’s case that was the competitive riding he’s always enjoyed. As he jokes: “Point-to-point is about 10 years and two-and-a-half stone ago for me!”

He and his wife Charlotte, who works in the new product development team at Liz Earle, are also excitedly planning the building of their new farmhouse at the Duxmore Barns site, which they hope to see finished next summer.

It will be home to the couple along with their children, seven year-old Pip, Thea aged four and three month-old baby George.

The two older children are already enjoying a similar kind of lifestyle to the one their dad experienced, with Thea having a pony, Pip a donkey and both of them loving the outdoor life, feeding calves and generally mucking in with the farming routines.

So are these little Legges likely to follow dad into farming?

Matt says: “I’d be happy if they did, but then equally we would support them in whatever their choice is”.

As he points out, despite all the challenges, farming is certainly a more viable choice than it might have been a decade ago.

“Probably if you’d asked me when I left school, I’d have said it was a very questionable career path” says Matt, “and certainly around that time I knew lots of colleagues who chose to take other paths”.

Since then, though, he’s seen plenty of evidence of ‘new blood’ coming into farming, from other professional backgrounds, and reckons that this can be only a good thing.

He admits that farming has traditionally been something of a closed community – partly because of the hefty capital investment needed just to get up and running.

But nowadays, with shared farm arrangement and more traditional tenancy agreements such as the one he enjoys at Quarr, it’s becoming possible for new players to enter the farming arena, bringing with them new ideas and approaches.

One thing that isn’t likely to change in farming is the community’s reliance on each other as neighbours and colleagues.

“It’s a community that really looks out for each other, and that counts for a lot” says Matt. “We don’t currently employ anyone, so I certainly wouldn’t be able to do all the shows and meetings I have to do if it weren’t for my farming neighbours.

“We all help each other out with favours, and that’s a really good support system to have behind you.”

By meetings, Matt means the regular trips he has to take to London and the National Agricultural and Exhibition Centre at Stoneleigh, Warwickshire, for NFU business.

It all makes for a hectic life, but it’s one that he clearly loves: “I hadn’t envisaged doing this job while the kids were so young, but when the opportunity arose, especially in the current climate, I saw it as an opportunity to influence things”.

He is certainly a youthful chair for the NFU, but then as he points out, his predecessor Caroline Knox was the same age.

“I guess we represent the next generation in farming and there is generally a real wealth of enthusiastic younger people involved on the Island”.

This has probably never been more important, with the uncertain spectre of Brexit looming – although Matt is optimistic that the process could hold just as many opportunities as threats for UK farmers.

“The key for me is to make sure we in this country get a level playing field with Europe” he says, “and as one of the leading countries in the world on animal welfare, we need to make sure we get proper ongoing support to keep progressing with that.”

As well as his planned trips to London and the Midlands, Matt is also hoping to get in a trip to Brussels later this year “for a look-round”.

“We won’t be doing that for much longer!” he quipped, heading back to his flock in the field.