Eventer Sarah has a big decision to make

Eventer Sarah has a big decision to make 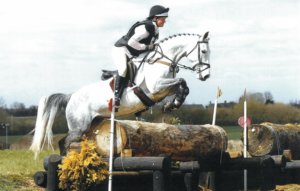 Island eventer Sarah Holmes is hoping she will have a difficult decision to make at the end of the summer season.

After a fine year of progression during 2013, Sarah is looking confidently to the future, and is keeping her options open for the time being as to whether she should pursue her personal goals, or attempt to break into the GB international set-up.

Still only 22, the rider from Lake Farm, Rookley, knows time is still very much on her side. But in the complex sport of three-day eventing – which embraces dressage, cross-country and showjumping – continued progress is of paramount importance.

Sarah has already passed through Novice and One Star levels to reach Two Star on her most experienced horse Lowhill Clover – know in the stable as Will. Now she must decide whether to push on with her aims of attaining Intermediate and then Three Star – the level used in Olympic competition – or concentrate on breaking into the GB Two Star set-up.

Last year she nearly made it. She was in the final squad of 12 for selection from all over the country, but only eight were picked to compete for their country. The ultimate level is Four Star, which is required at such venues as Badminton and Burghley.

Sarah reflected: “I had a fantastic time last year. I did my first Two Star on ‘Will’ at Gatcombe Park, and I was one of only about 50 riders from an entry of 120 to get round the course. It was very tough. Among other events, we also competed in France, and Will coped very well.”

In her busy schedule, Sarah also passed her BHS Stage Four teaching exam with distinction, and has already begun training for her Intermediate exam, which she hopes to take later in the year. After a six-week winter break in Australia, she is now gearing up for the new season, and will again be competing on family horse Lowhill Clover, an experienced 12-year-old, as well as Harley Brown, owned by Andrew and Ellen Brown, who is still at the Novice stage. Sarah pointed out: “He has got to do two more novices this year to reach One Star, and that is also one of my aims.”

She continued: “I have recently received confirmation that I have got through to the Two Star GB selection stages again for 2015. So I am hoping to get as far as I did last year, when I got to train with the squad, and hopefully I can go that little bit further, even if it as a travelling reserve. But if Lowhill Clover goes really well we might push him to go Three Star. The problem is that I cannot compete in the Two Star GB team if I have ridden at Three Star, so that is the decision I will have to make at some stage, and it is going to be a tough one.”

She added with a smile: “If I feel ready and he feels ready I think we might crack on for Three Star toward the end of the season, but it’s is a big step up. The horse has to be super fit, everything is far more technical – and I will have to see how brave I am feeling!”

Sarah has a third horse, Dunganstown Fleur, which showed a lot of promise in her first year, and could even attain One Star this season. With no events staged here, she and her family, aided by Wightlink sponsorship, travel not only to the south coast to compete but as far as the north Midlands and East Anglia. She added: “I am so lucky to live on the Island, with the indoor school here, and getting on so well with the people I teach. We are also close as a family. I suppose if I could pick up this whole set-up, and move to the mainland, which would save a lot of time and travelling, I would be gone like a shot. But I know that can’t happen.”