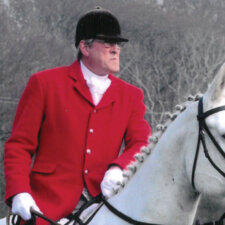 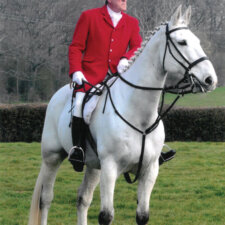 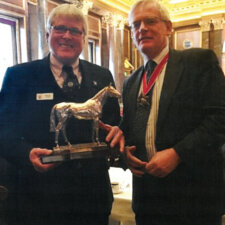 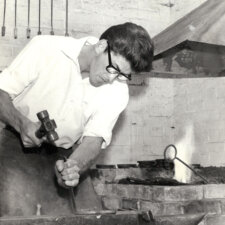 The mantlepiece is starting to look distinctly crowded at the Blackwater home of Malcolm Purcell, following his latest surprise award from the Worshipful Company of Farriers. We asked the veteran craftsman, who has spent over half a century shoeing horses for Royalty and the Military as well as riders and owners here on the Island, to tell us all about it.

Being invited to a posh dinner isn’t that much of an out-of-the-way event for Master Farrier Malcolm, so when he received an official invite to attend The Drapers Hall in the City of London in March, it didn’t raise any particular suspicions.

Even when he arrived and found himself seated at the top table, he simply sat down and enjoyed the lavish lunch with the 350 other guests.

But halfway into the speeches, just when, he joked, he had started to snooze after a few glasses of wine, he says:  “I suddenly realised they were talking about me, and my services to livery”.

The speech ended with the presentation to Malcolm of a magnificent solid silver horse, in recognition of his 50 years-plus as a farrier, and he was naturally delighted.

“I had no idea it was coming, so it had been a really well-kept secret!” he said.

Bringing home the trophy proved a challenge in itself, though:  not just because of its sheer weight, but because that day happened to be the day of the Westminster attack, when chaos reigned in the City.

“There were police everywhere, looking in everyone’s bags and there was no way you could get a taxi, so I ended up walking across London with it in a box – and it’s pretty heavy so I certainly knew I had it!”

Bringing back the silverware

Safely back home at Blackwater, Malcolm’s silver horse has now taken pride of place among his countless other awards, including the one he received in 2011 with the prestigious title of Master Farrier – one of only 20 in the whole of the UK.

He was also awarded several years ago, the Freedom of the City of London, an ancient honour which quaintly gives him the right to ‘drive sheep over London Bridge’.

Never one to take himself too seriously, Malcolm decided he would exercise that right – and got sponsorship for his effort, to raise funds for the Isle of Wight Hunt.

So how did a horse-loving lad from Wolverhampton end up as one of the UK’s elite in the world of farriery?

With horse-riding parents it was perhaps to be expected that the young Malcolm would want a horse of his own:  he recalls that his first one had come out of the local coal pit, where it had refused to pull the tubs.

“I’d always had an affinity with horses” he recalls, “so when I decided to go into the Army, a mounted unit seemed the natural choice”.

It was in 1961 that he joined the Household Cavalry, which he regarded as a good place to learn a trade and still earn full pay.  As one of eight farriers in the workshop, he loved the work and knew he’d made the right choice.

The job brought him into contact with some famous horses – not just Royal ones, but heroic characters such as Sefton, the British Army horse that survived the critical injuries he suffered in the horrific Hyde Park terrorist bombings in 1982.

Malcom says:  “I remember that horse coming in to Knightsbridge as a re-mount so it was a big shock when I heard he’d been caught up in the bombing”.

He also recalls Cicero, the famous drum horse who earned the nickname “the horse that the Irish couldn’t kill”.

During his time in the Household Cavalry, part of Malcolm’s training involved caring for the horses’ teeth – a role now considered strictly the preserve of vets – and he was sent to the USA to learn the subject in greater depth.

Later, after he came to settle on the Island in 1971, he would use that expert knowledge in lectures to local riding schools and fun events for pony clubs.

Events such as that have made him a familiar face on the Island, and he says he still regularly gets into chats with people in the street who say they remember him from their childhood pony club camps.

He’s also well known in local Hunt circles, and was Joint Master of the IoW Hunt for a decade until two years ago.

These days, he describes himself as a ‘happy hacker’ on his 17.2h Warmblood, Tristan.  He also works a Springer Spaniel during the shooting season, picking up pheasants.

At 71, he says he doesn’t want to stop living the kind of life he loves:  “I’ve always thought it’s better to wear out than to rot out” he laughs.

Now semi-retired, he picks and chooses when to work on the farriery, but there will always be horse owners for whom nobody but Malcolm the Master will do.

When he’s not working or hacking, he can usually be seen behind the wheel of his latest four-wheeled acquisition.

He admits to a weakness for motors, and for a year or so, was the owner of a head-turning green Aston Martin. Having got that little beauty out of his system, he’s currently driving a Lexus.

Married for 51 years to Sandra, the couple have a son Nathaniel, who works in the film industry, and daughter Debbie, a phlebotomist and also a passionate rider.  There are also two granddaughters and a great-grandchild on the way.

The Purcells moved to the Island to build a better future for them and the children, and Malcolm says:  “Looking back, it was definitely the right decision.”

“The Island is a very special place, one where you can still leave your keys in the door.  I’ve absolutely loved living here and, given another chance, I’d do the same again.”

Some of the lads Malcolm has trained are now working all over the world – “doing better than I ever did” he quips – but many of them still keep in touch.

It’s a different world these days, with paper qualifications and certificates assuming much more importance than ever before.

“I always think that my best qualification is that I’ve stood the test of time” says Malcolm.

And long may that continue…