Life and times of a royal retreat

Home|Features|Life and times of a royal retreat
Previous Next

Life and times of a royal retreat 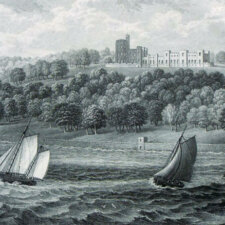 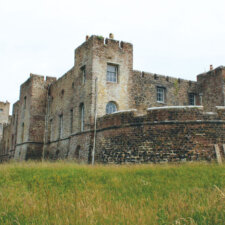 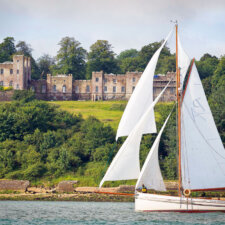 As controversy rumbles on over the future of Norris Castle in East Cowes, we discover that this isn’t the first time in its long history that this prominent Island landmark has made the headlines.

Sitting in an idyllic landscaped park overlooking the Solent, the Gothic Revival-style Norris Castle isn’t strictly a castle at all – but a rather grand country house wth castellated walls that give the impression of a huge fort.

Developers want to turn it into a luxury hotel, spa and watersports centre with surrounding homes and a retirement complex – insisting they will respect the history and heritage of the site.  So what is this illustrious history?

It began in 1795 when a retired politician by the name of Lord Henry Seymour purchased what was then a small farm, and pretty quickly started making plans to turn it into a villa estate.

He appointed architect James Wyatt to design a ‘castellated model farm’, and the construction of the main house, Norris Castle, started in around 1799 – at a cost of £190,000.

The landscape is thought to have been designed the same year by Humphrey Repton, one of the country’s greatest landscape designers, incorporating what has been described as one of the grandest examples of a castellated walled garden anywhere in England.

As a keen farmer and gardener, Lord Henry also invested in agricultural improvements on the estate, and in 1802 was praised by the Board of Agriculture for his ground-breaking improvements – including using seaweed as a fertilizer: ‘The coast abounds with Kelp but this valuable manure is not used except by Lord Henry Seymour at Norris’.

Down the years, Norris Castle and its landscape has been enjoyed and admired by many a royal visitor, from George IV who visited in 1819 to Queen Victoria, who regularly stayed there with her mother in the 1830s whilst still a young princess, and continued to visit with her own children later in life.

In fact Isle of Wight-loving Victoria even considered buying Norris Castle for herself, but decided it was “too expensive” and so bought the neighbouring Osborne House instead. However, she still continued to visit Norris and would arrange ‘lodging’ there for eminent royal visitors such as the king of the Netherlands.

Later on, Norris Castle frequently provided sumptuous lodgings for her grandson, Kaiser Wilhelm, and to this day there remains a canopy bath in the house called the ‘Kaiser’s Bath’.

By that time, the eccentric original owner Lord Henry Seymour had died and the property passed to his brother Lord George until it was bought in 1839 by a newspaper tycoon, Robert Bell.  His main claim to fame was that he built the mile-long sea wall that protects the estate’s coastline, at a cost then of some £20,000. 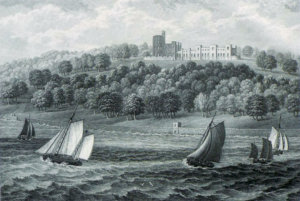 In 1880, Elizabeth Russell, the Duchess of Bedford, was appointed Mistress of the Robes to Queen Victoria and in order that she could be near to Osborne, her husband the Duke of Bedford bought Norris Castle.  Tragically, 11 years later at the age of 71, the Duke committed suicide by shooting himself in London, when it was said he was in a state of ‘temporary insanity’ due to pneumonia.

Following the subsequent death of the Duchess in 1897, the estate was inherited by the late Duke of Bedford’s 28 year-old nephew, the 2nd Baron Ampthill – who immediately announced that he wanted to sell it.

Once again the aging Queen Victoria considered buying it, but this never happened and during the five years that the place remained unsold, there came and went a succession of wealthy and titled temporary residents, including, the eccentric Philadelphia millionaire AJ Drexel who stayed for the summer yachting season in 1899.

By 1903 the property had fallen into disrepair and was sold to a syndicate, although the existing tenants Captain and Mrs Orr-Ewing remained there for some time – or at least until 1904 when they were the victims of a major burglary, while the Captain was away from home.  The burglars got away with valuables including the Captain’s inscribed silver yachting trophies. A week later, much of the stolen haul was recovered from the estate’s grounds, but  the Orr-Ewings hurried away from Norris Castle shortly afterwards.

Between 1904 and 1908, there were numerous attempts to sell the dilapidated estate, with one auction catalogue describing it as a “grand opportunity for development into a seaside resort with practically every house overlooking the world-renowned yacht anchorage and Solent” (which sounds rather familiar).  However, the castle failed to sell and was withdrawn from the auction when the bidding only reached £38,000.

In 1906 came a proposal to turn the Norris Castle estate into a golf club, “to rival any in the world and bring together the yachting world and golfing world at Cowes”, but despite the grand plan, nothing ever came of it. By July 1907, it was said that Norris Castle had been unoccupied for several years and was described rather sadly as ‘empty and dismantled’.  It was put up for auction again  the following month, but withdrawn from sale when the bidding this time only reached £28,000! 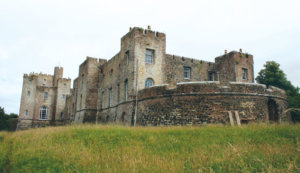 Scene of a crime

The estate became the scene of another brazen robbery in 1947 – during the 38-year period of ownership by Major Arthur Birkbeck and his wife Florence. Elderly Mrs Birkbeck suffered a fractured jaw and was hospitalised after being brutally coshed  by one of three masked robbers who demanded money and jewellery.  Luckily they were interrupted by the arrival of the estate bailiff and made their escape with just a few valuables, leaving behind a dark brown trilby hat.

After Mrs Birkbeck died in 1955 the Norris Estate changed hands again when it was auctioned off in 19 separate lots.  Revealed as the new owner of Norris Castle and 34 acres was Mrs Catherine Briscoe George, an elderly widow who, followed by her daughter Joan Lacon (later Coventry) and her husband, worked tirelessly to restore the property.

In 1975, Commander and Mrs Lacon opened the castle to the public for the first time in over 140 years to help pay the huge maintenance costs, launching with a big opening ceremony by best-selling author Dick Francis.  The Lacons also managed to reunite the castle with its original lands, (previously auctioned off as 19 separate lots), to bring the size of the estate back to 225 acres.

Also during the 1970s, Norris Castle was showcased to the wider world when its spooky Gothic exterior was used as a filming location for the cult TV series Dr Who, with Jon Pertwee.

As for The Commander and Mrs Lacon, they were divorced in 1976 and Mrs Lacon went on to marry Major Digby Coventry, who fought in the Second World War and was mentioned in dispatches. After Joan died in 2006, Major Coventry continued to occupy the castle until his death in September 2014, bringing one era to a close – and opening the door to a  future that’s yet to be realised for this fascinating historic property.

*  In February 2016, Norris Castle was bought for £4.7 million, with  the aim of being renovated and opened as a luxury hotel. The owning company is Uavend (Norris Castle) LTD, operated by Eamon O’Connor and his business partner, Edward Wellington.