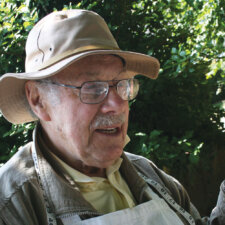 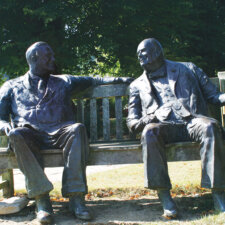 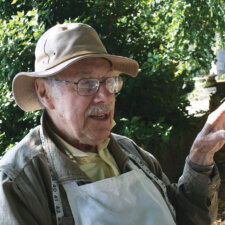 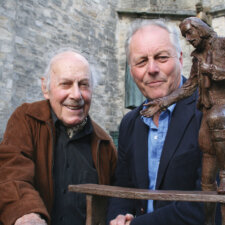 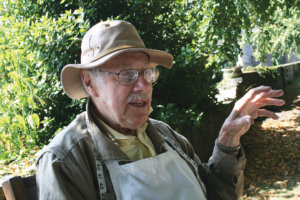 Former Island resident Lawrence (Larry) Holofcener died on Saturday March 4th 2017 at his home in Florida, just over a week after his 91st birthday. Famous in later life for his amazing life-size sculptures of famous historical figures, Lawrence and his wife Julia had a home in Bembridge for many years and even after moving back to the States to be near family, they returned most summers to visit friends on the Island. By Jo Macaulay.

The Holofceners recently gifted Lawrence’s bronze bas-relief of Lawrence Olivier in 24 different roles to the Apollo Theatre in Newport, which is to be hung in the foyer shortly.

In fact the theatre was his first love, and he was a successful songwriter – penning ‘Mr. Wonderful’, the title music used for the Godfather Mark II – as well as a singer and author who wrote the Broadway stage scores for the musicals ‘Mr. Wonderful’ and ‘Catch a Star’.

Born in Baltimore, Lawrence Holofcener attended the University of Maryland and the University of Wisconsin–Madison where he met and performed with Jerry Bock, and the pair went on to write songs for ‘Big As Life’ and ‘Your Show of Shows’, starring greats such as Sid Caesar, Imogene Coca and Carl Reiner.

In 1968, Lawrence wrote the play ‘Before You Go’, a Broadway comedy that led to an acting career in such hits as ‘Hello, Dolly!,’ with Carol Channing and Ginger Rogers. He made his debut on Broadway in ‘Stop the World, I Want to Get Off.’

It was whilst waiting around in the wings after taking the role of Professor Henry Higgins in ‘My Fair Lady’, with the Charleston Light Opera Guild in the summer of 1978, that Lawrence decided to try his hand at sculpture. He walked into the Gibbes Museum of Art and asked a woman at the desk where he could buy clay and tools, and she answered by offering him a job as a teacher, which he accepted. The rest, as they say, is history.

Lawrence’s statue of Winston Churchill and Franklin D Roosevelt sitting on a bench, named ‘The Allies’ is one of his best-known works, and a cast of the sculpture was unveiled by Princess Margaret in New Bond Street in 1995 to commemorate 50 years of peace. Another cast of this statue sits next to the Priory Bay Hotel in St Helen’s, where guests love to pose for photos between the two great men, just as they do in New Bond Street.

His bronze of the Young Mr. Churchill entitled ‘In Conversation’ was unveiled on November 28th, 2012, at London’s Hyatt Regency Hotel, where the great statesman sits on the Churchill Bar Terrace with a glass of brandy and a cigar. 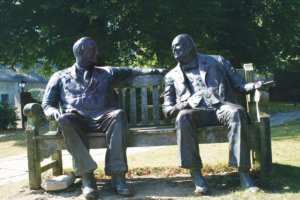 Lawrence gifted a cast of his life-size sculpture of the young Shakespeare to Stratford, and he unveiled it on his 90th birthday in the spring of 2016. The bronze of the Bard standing with one leg on a bench has become a tourist attraction in its own right. There is another cast of ‘Young Will’ near the entrance of the Chattanooga Theatre Centre in the US.

One of Lawrence’s later works has been a life size bronze of John Lennon, sitting on a bench with his arms outstretched, and it was the sculptor’s wish that a copy of it would be sited in Lennon’s home city of Liverpool.

In the summer of 2015, Lawrence was at St Andrews in Scotland with Tony Jacklin who unveiled his four bronze bas relief sculptures ‘Faces of Golf’ at the British Golf Museum. Featuring 116 of golf’s greatest players, the sculpture includes Mary Queen of Scots, who was said to be an early aficionado of the sport.

At the time of his death, Lawrence was working on a play in which Graham Pountney, who also has a home on the Island at Seaview, was hoping to play the part of Churchill.

“Lawrence Holofcener was an extraordinarily creative man,” said Graham. “Full of ideas and wisdom: always bursting to create something new! He was well-loved and admired on the Island.

“I was fortunate enough to be at the unveiling of his latest sculpture of Shakespeare outside the RSC Theatre in Stratford upon Avon. Just a year or so before he fell ill, we were in a hotel in Heathrow, discussing together the casting of his latest play that’s planned to open and tour in the UK before coming to London. ‘The Big Sleepover in the White House’ is about a two-week meeting of Roosevelt and Churchill that set up ‘the special relationship’ and brought the USA into the 2nd World War.  Those two men were the inspiration behind his iconic sculpture ‘Allies’, which can be seen not only in Bond St in central London, but in the Priory Hotel, Seaview too. I will miss him.”

Lady Grylls has been a great friend of the Holofceners for many years and the couple gave her a maquette of the famous ‘Young Will’ statue. 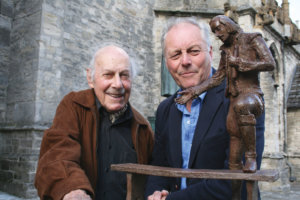 “Lawrence Holofcener is one of the best-recognised sculptors of his generation,” said Lady Grylls.

“A multi-talented charismatic character who was successful first as an actor on Broadway – then as a writer and artist who later became recognised internationally as a sculptor of rare genius. The Holofcener life-sized statues of well-known figureheads in history are on display all over the world. The limited editions are collectors’ items.

“I am privileged to have been given a small maquette of Lawrence Holofcener’s last commission – the life-size statue of Shakespeare was created to commemorate the bard’s 400 years. This elegant work of art can be seen standing majestically in the Square in Stratford-on-Avon.

“With the encouragement of his beautiful and dynamic wife, Julia, Lawrence Holofcener was still busy sculpturing on his 90th birthday. Larry’s head and shoulder and miniature busts commemorating Royalty, the good and the great and the famous, are enjoyed by the general public throughout the world.

“For example, the Apollo Theatre has the incredible face frieze of the many roles played by actor Sir Laurence Olivier. And the huge bronze frieze of the faces of 36 famous golfers dating back to Mary Queen of Scots was unveiled last year at St. Andrews Golf Course in Scotland.

“However, it is for ‘The Allies’ in Bond Street that Lawrence Holofcener will probably be best remembered. Tourists and shoppers alike stop and stare at this famous bench commemorating the historic moment in history when the two leaders of the free world met before the USA joined in the last World War.”

In the years to come people will be interacting with Lawrence Holofcener’s statues and they truly are a magnificent legacy and memorial to this ‘Renaissance Man’ whose creative life spanned music, theatre and the arts.