John must sit out ‘Island’ epic

John must sit out ‘Island’ epic 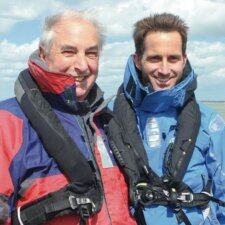 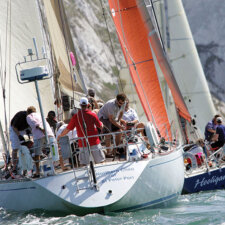 John Dudley has just one slight regret about serving his second term as Commodore of the Cowes based Island Sailing Club this year. The prestigious role means he will not be able to compete in the JP Morgan Asset Management Round the Island race on June 21.

The race is organised by the Island Sailing Club, and John, a keen and vastly experienced yachtsman, will be far too busy helping to ensure the smooth running of the event that is the fourth highest in participation numbers of any sporting fixture in the country.

John and Island Sailing Club manager Lea Bennett are among the Round the Island Race steering group, who organise the race, which is a year-long operation. Indeed, plans for next year’s race will be underway almost before the last boats cross the line this year. And on race day itself the 200 or so volunteers can expect to be working for anything up to 18 hours.

With around 16,000 participants, the only three UK events to eclipse the Round the Island Race in terms of competitor numbers are the London Marathon; the Great North Run and the Great South Run. The first Round the Island Race took place in 1931, when just 25 boats set out to complete the 55 nautical miles, travelling anti-clockwise around the Island. Since that first adventure, which was won by a local fishing boat, the event has grown beyond recognition in numbers and stature, especially over the last few years.

Now there are usually around 1,600 boats competing, and the record number stands at 1,908 boats in 2011. Some people even try to sneak in under the radar and take part even though they have not officially entered the race – something that cannot be prevented, but is not highly thought of by the organisers.

John said: “We could just about handle 2,000 boats, but that would be the absolute limit. We stagger the boats through 11 starts, 10 minutes apart, and the Eastern Solent is actually closed down to other shipping so the race can get underway. Sometimes there are cruise liners out there waiting for the Eastern Solent to re-open.”

The date and timing of the race are important aspects of its success. If it gets underway too late in the morning, the tide can turn; the wind can die and many competitors can be left ‘high and dry’ almost before they have crossed the start line.

Lea explained: “The steering group’s job is to run the race, and report regally to the general committee of the Island Sailing Club. Normally after the race has finished we send out a questionnaire, and from that we develop the race for the following year. We have to start the race about two hours before high water, but we wouldn’t start any earlier than 5am.

“Month by month before the race we look at what needs to be done, and what changes if any need to be made. Apart from running the race itself, we also have to look after the sponsorship side of things, because sponsors are now a very important part of the event. Cowes Yacht Haven becomes the race village, with the entertainment and prize giving taking place there, and it has become much more than just a race these days; it is a big social event on the calendar.”

One of the biggest headaches for the organisers is that many competitors attempt the race having never sailed outside the Solent before, and suddenly find themselves battling the elements on the south side of the Island. There is a time limit on the race, but with some boats taking up to 16 hours to circumnavigate the Island it can become gruelling and extremely tiring, especially for the novices. All competitors are issued with a safety booklet to try to ensure a safe passage, especially as the wreck of the 3,8775-ton Greek steamer Varvassi, which sank in 1947 just off The Needles, has been hit by boats on numerous occasions.

John said: “The ideal conditions are a north-westerly wind of four to five or even six knots; that is when records are broken. Two records, the monohull and multihull, were both broken last year when conditions were near perfect.”

The multihull record went to multi-Olympic sailing gold medallist Ben Ainslee, a good friend of John, who went round in his boat ‘Rita’ – which in fact is the name he calls all his boats! Afterwards Ben described it as: “The perfect race.” He will be competing again this year, and no doubt looking for another perfect voyage.

Commodore John was born and bred on the Island, and has been a member of the Island Sailing Club nearly 40 years. He served his first term as Commodore from 1998 to 2001, and agreed to return on a 12-month interim basis until this November. He has been involved in the Round the Island race for many years, both competing and organising. His talents do not end there, with two Sydney to Hobart races under his belt as well at the Fastnet Race in 1979, before he finished ocean racing in 1986.

He said: “My grandfather was a sailor and my father was in the Merchant Navy. My interest began at school when we were building cadet dinghies, and sailed them at Gurnard Sailing Club. I joined that club when I was 18 and am still a member there now.”

John continued: “I have competed in many Round the Island races, and the tankards are lined up on the shelf at home to prove it! I sailed a boat named ‘Purple Haze’ which was very successful, and won Cowes Week a number of times in that class.

“The great thing about the Round the Island race is that you are competing against top sailors and absolute amateurs – we call it a race for everyone, with sailors able to have their family or friends on board. I have raced with my three young grandchildren on the boat. I am not really sure how many times I have competed, but it has to be around 30. We were very close to winning the race one year on ‘Purple Haze’ and probably would have done so if I had not ‘parked’ the boat on Ryde sands when we were leading. The boat actually won the race with another crew after I sold it.”

He added: “Many people come back year after year to take part; some from as far away as the United States, New Zealand, Russia, and several other European countries, who make it part of their holiday. And of course a lot of people from the Island take part every year. It was quite a big decision to become Commodore rather than compete this year, but all being well I shall be out there again next year taking part, although I accept that at the moment I do not have a boat capable of winning it.”