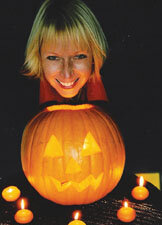 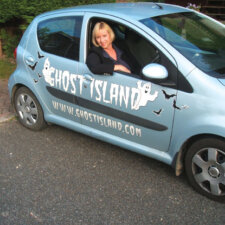 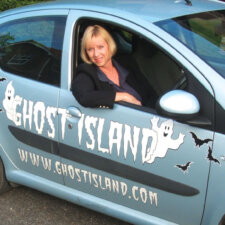 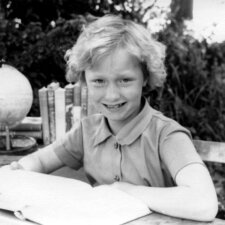 Gay Baldwin thinks she once saw a ghost, but she is not absolutely sure. She was just a toddler living at the family home in Walsall when a little old lady dressed in black appeared in front of her.

Over the years memories have become less clear – was it a ghost, or was it part of the fantasy world of a then four-year-old? She said: “I honestly don’t remember much about it, but I have been told there was this little old lady who sat in our kitchen which I could see, and talked to. After all this time I don’t know whether it happened or I just imagined it. But I would like to think it was a great granny or someone who came to see me.”

Whatever the explanation, which will never be resolved, Gay believes that was possibly how her fascination for the paranormal came about. Over the past 35 years or so that fascination has escalated to such heights that Gay has published no fewer than eight books centred on spooky sightings and experiences of people living all across the Isle of Wight.

Her most recent publication spotlights what is generally reckoned to be the most haunted area on the Island, the site of the Knighton Gorges – a place where cars inexplicably break down and strange creatures are spotted on top of two decaying stone pillars that were once part of the imposing gateway to the Elizabethan manor house, which has long since disappeared.

Her latest publication is slightly different from her others in as much that it focuses just on Knighton Gorges rather than dealing with stories from all across the Island. It is one she admits she enjoyed researching and writing – but I won’t reveal any more for fear of spoiling a good read.

Gay was born in Bloxwich Maternity Hospital in the Midlands, and lived in Walsall until she was just four-and-a-half when the family moved down to the Island – reckoned to be the world’s most haunted. Her father worked for Saunders Roe, and the family lived in Newport, with Gay attending Nine Acres Primary, a school at which her daughter and granddaughter later spent time. Gay recalls: “I found it difficult and only spent one term there, because they didn’t do any work, they just played with sand, and I wanted to be reading and writing.”

A move to East Cowes provided Gay with the opportunity to attend Whippingham Primary School, which she says was a superb school and gave her a good grounding. “On a Friday afternoon the teacher would sit us down and read novels to us, and even teach us how to play poker and pontoon – all sorts of interesting things,” she recalls… 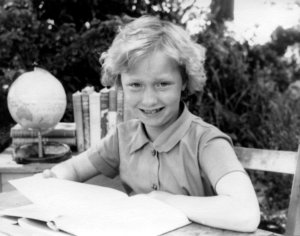 Gay was an avid reader of books from an early age, and spent all her pocket money on buying Enid Blyton novels and the like. She smiled: “My family used to say ‘give her a cornflake packet and she will read it’. I was always surrounded by books.”

As her education continued at Carisbrooke Grammar School, it became obvious even to herself that while maths and the sciences were never going to be high on her list of academic achievements, English could be.

“It was my complete lack of mathematical ability that pushed me towards writing. I tried to take the maths O level, but couldn’t do it, even after three attempts, so that rather cut out a lot of career choices,” she said.

Gay had her sights sets on becoming maybe a customs officer, cartographer or even archaeologist, but they all went out of the window along with her maths exam papers. Instead she explored the option of journalism, but while still as school worked part-time in a newsagents. Maybe that would be the closest she would get to being a journalist, until one day she was told a junior reporter’s job was becoming available on the IW County Press.

Her application was successful, and the week before she left school she passed her driving test, before embarking on her career in journalism, on November 1, 1971. She recalls: “It was a great opportunity, and turned out to be a fabulous job.”

Gay’s association with the County Press continued right through until 1996; full time until 1980, before she left to have daughter Vicky, and then returning part-time. It was during her first stint on the Island newspaper that the subject of ghosts reared its eerie head. The idea of writing a ghost book was hatched in 1975 when she went to write an article about Billingham Manor, near Chillerton, which was supposedly haunted.

“The residents were happy to talk about the ghosts they had there, particularly the one that always comes out at Christmas. Then I hit on a few other ghost stories, with the idea that the feature would be used to help fill the pages for the Christmas edition,” Gay said.

“After the story was published a few letters came in from readers telling me about other ghosts that were around the Island. The editors gave me the letters, and one lunchtime we were sitting in Calvert’s – as we often used to – when another member of the County Press staff, Ray Anker said that no one had ever written a book on Isle of Wight ghosts.”

It was an idea that Gay and Ray initially toyed with, put on the back burner for a further 12 months before they got their heads together in 1977 and decided ‘let’s do it!’ They put the word out, collected stories, scanned the archives, and came up with enough material in about eight months to publish a 72-page book entitled ‘The Original Ghosts of the Isle of Wight’. A print run of 1,000 quickly sold out, and the book has in fact proved so successful that over 100,000 copies have subsequently been sold worldwide.

“Before we started the research and wrote the book I wasn’t too sure about ghosts. But I do believe now,” Gay says without hesitation. There was a 15-year gap before she decided to write a second book on Island ghosts, simply because, she claims, she was too busy doing other things and it didn’t really occur to her to write any more. 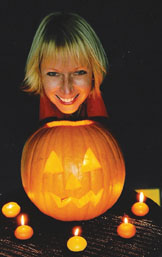 Ray Anker did not want to involve himself anymore, so Gay opted to go it alone, compiling a host of fascinating, spooky and sometimes almost unbelievable tales from Islanders who had been involved in paranormal experiences.

Within nine months there was ample material for a second book, and even a third. And the more Gay wrote, more and more stories came to light. She says: “People began to trust me, and knew I would not mock them. In fact I found the more bizarre the stories were the more believable they were.”

So how about the strangest, most unusual Island ghost tale of all? As Gay sat in the kitchen of her home in the Cowes area, she paused briefly before declaring: “The most intriguing was the one about the vanishing pub. It came to me from someone who was quite well known on the Island, but didn’t want his name used. He got in touch to find out if I had heard anything similar.”

The story goes that he and a friend were driving out one evening in the Porchfield and Newtown area for a drink when they saw a lane they did not recognise. They turned up it, and at the end of the lane was a pub they had never seen before.

It was unfriendly and cold as they entered and everyone stopped talking. They had their drink, and left very quickly with all eyes upon them. They couldn’t wait to get out of the place, went up the road, and were very surprised to find themselves at Calbourne. They couldn’t work out how they had arrived there, but decided to go back and try to find the pub. They found nothing, and never saw it again!

The man who told Gay the story thinks the pub was called either the Falcon or the Vulcan, but much research has revealed no clues to the goings on that night. That story was used in Gay’s second book, and like so many of her other revelations it leaves so many unanswered questions. There are a lot of similarities to the ghost stories she is told. Apparently ghosts are not always misty and transparent. Some are quite solid, and they don’t just appear at night.

Gay says she could never turn her skills to fiction writing, although a lot of sceptics would argue that she is writing fiction anyway. She insists she simply reports on what she is told, and converts the tales of the unnatural into easy-to-read books.

They have become so popular that she holds the dubious distinction of having her books the most stolen from Island libraries! Gay says there may still be more books to come, and one subject that fascinates her is the history of some of the long-gone Island hospitals, and the ghosts that roamed their wards and corridors – so watch this space!