Home|Interviews|Charles Hancock: Charles became a fisher of men!
Previous Next 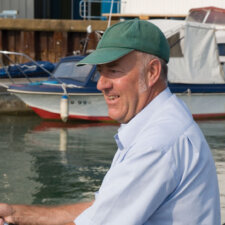 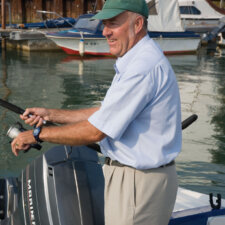 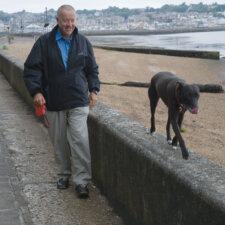 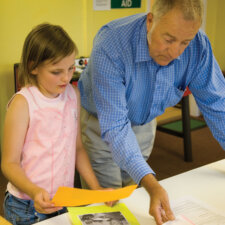 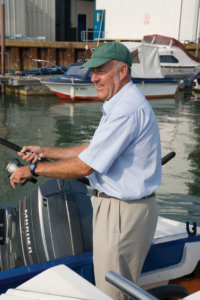 He’s been an ambulance driver, a fisherman, businessman and youth worker – so Independent councillor Charles Hancock has never been far from life’s tough realities.

It comes as something of a surprise, then, when this solidly-grounded representative for the Island’s Osborne ward begins describing his intensely emotional experience of “finding God”.

Charles Hancock talks unashamedly of spending days in tears, wondering what on earth was wrong with him,before having what he describes as a personal experience of Christ in the middle of a field … and then literally leaping over fences in his excitement to race back home.  He rattles off the date of this encounter effortlessly as September 27, 1972.

Ironically, this dramatic conversion came as the result of a date with a pretty young nurse who he admits he was initially attracted to “for all the wrong reasons”.  Cathy encouraged him to some church meetings where his first reaction was predictable:

“As an ambulance driver, I was diagnosing them all as nutters!” he laughs.

However, he says he couldn’t deny that these people “had something” – and gradually found himself getting inexplicably emotional for no apparent reason.

Not surprisingly, his conversion and new approach to life produced some bemusement among the tough ambulancemen he was working with at the time, in Winchester – and not a little alarm from his family, none of whom had the slightest connection with religious life.

“I was a shop steward at the ambulance station” he recalls, “and in fact along with the other lads, I had even taunted one guy who was involved with the church.

“The people at work told me to take six weeks off because they thought I was having a breakdown.

“But gradually the other guys realised I wasn’t faking because it had changed my whole outlook on life”.

“Called” to the Island

It was around this time that Charles began spending weekends with a Christian community in Freshwater – and began to feel drawn to making a life on the Island.

The chance came to him unexpectedly when an ambulance colleague announced he’d inherited a fishing boat and didn’t know what to do with it.

“I knew at once it was the opportunity I’d been looking for and said ‘I’ll run it for you!’” Charles recalls.  He set up in Yarmouth, fishing for oysters in winter, trawling in the spring and then taking out holidaymakers on angling trips during the summer – a role which won him the nickname ‘Captain Charlie’. 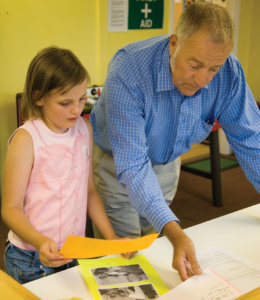 By this time, Cathy – who it turned out had a boyfriend anyway – was out of the picture because Charles had fallen for her friend Mary, who became his wife in 1974.

When, after five years, the boat owner sold up, Charles and Mary went into the fish business together, initially selling on a van round, and subsequently from a shop in Node Hill, Newport, for 15 years.  Hancock’s Fishmongers – which for its last five years was based in premises at Newport Bus Station – built a high reputation and was the winner of a string of awards from the Sea Fish Industry body.

“We help them start believing in themselves”

However, by this time Charles – a long-serving member and elder of the Island’s Community Church – was looking for a new challenge.  It came to him in the form of an approach from the Hampton Trust charity, which works with disadvantaged young people.

Because of his strong background in youth work with the church, Charles was headhunted by the charity to work as a bail supervisor with young offenders.

He did that job for over three years, and then moved into to what could be said to be the more positive arena of prevention work – helping youngsters before they get into trouble, by playing a mentoring role in their lives.

Now the IW Manager for the Hampton Trust, Charles is responsible for training other people to mentor young people up to the age of 17 who are facing difficulties.

“A major problem with a lot of the young people is low self-esteem” says Charles.

“We try to raise their horizons and help them to start believing in themselves”.

The main issues he and his team encounter are anger and addictions, which makes it tough work. – but there are plenty of success stories:  “After six months we have seen many young lives transformed” he says.

The mentors deal with some sad and often shocking cases, but Charles says:  “You have to get past the presenting symptoms to the root cause, which can often be rejection.

“The lack of parenting skills on the Island is appalling.  It’s not easy – kids don’t come with a handbook, and we can put such pressure on them to achieve”.

This is where Charles the councillor comes in.  One of only four Independent councillors on the Island, his views on education are pretty strong.

“Square pegs in round holes”

He describes the controversial three-tier system as the “square peg syndrome” and says it makes the Island’s education system worse than that on the mainland.

“What we have got is failing because it’s a square peg in a round hole” he says.  “What teacher is going to want to move from a two tier to a three-tier system? It makes it hard for us to attract people. We are failing all the time, and to my mind the biggest priority for this council is education”.

Another priority is tourism – although Charles does not share the controversial view of council leader Andy Sutton on discouraging low-budget coach party visitors.

“We shouldn’t discriminate against people on the basis of their spending” says Charles.

“Don’t judge people on what they spend”

“Whatever they spend, it all goes into the pot.  I have had budget coach holidays in the past which I have really enjoyed, and then gone home and told others about.  It’s about promoting the beauties of the Island, not judging people on the amount of money they spend.

“When it comes to attracting visitors, we need them all. I’ve been in retail and used to serve cockles and mussels to those who perhaps couldn’t afford salmon or lobster. So what? 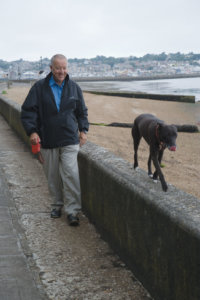 “People talk about making the Island like the French Riviera, but I’ve just come back from there and I didn’t like all I saw.  To get that on the Isle of Wight we need to focus on raising standards and the level of wages.

“There are flats in East Cowes now that are empty for three quarters of the year – so how’s that good for the economy?

“We need a balance of up market properties and shouldn’t turn our nose up at the others.  This is a lovely island, and in my view it’s here to be enjoyed by everyone”.

So what about the ongoing ports review and ferries debate, with the suggestion of the Council coming in as a third ferry operator?

“That’s a Pandora’s box, and not one I would rush to open” he says.  “People ask me how you reduce the cost of the ferries but I think we have a good service overall.

“The ports review is looking at all options, which may include other providers.  I am trying to keep open-minded but I’ve had all the wacky phone calls, you know, people who own a piece of land they feel would be ideal.  The evidence is currently being gathered to report to the Cabinet in 12 months time”.

And what about the number of hotels reverting to private residences – should this be allowed on a tourism-dependent island?

“It’s a good thing in many ways” reckons Charles. “If people have guest houses and they are trapped, unable to afford either to upgrade or to sell, then it’s wrong and draconian to say you can’t sell it as a home.  We do need to upgrade what we’ve got but you cannot do it by force”.

As an Independent councillor, all Charles Hancock’s views and stances naturally spring from his own experience and conscience rather than any strict party line – but is it easy operating on the council without a party backing?

“It can be frustrating” he says, “especially when I read about Council decisions in the County Press because I am not informed.  It’s embarrassing and makes me look stupid”.

However, as with all things, there’s an up side:  “There’s value in just being me” he says.  “I was re-elected with a slim majority of just 10 votes but as an independent it has to be all on your own merits”

The council business, along with his hectic work and church schedule, certainly keeps Charles busy:  “I have had to deck over half of my garden because I just don’t have the time to do it!”

So how would he feel about being Council leader?

After a long pause for thought, he replied:  “Yes – I think I’d like to be Council Leader.  I think I’m a leader by nature”.

But for now he has plenty to occupy him:  “I enjoy being a councillor, and as for the Island – well, it’s  just  a brilliant place to live”