Home/Interviews/M/Mike Randall: Mermaid rises from the depths
Previous Next 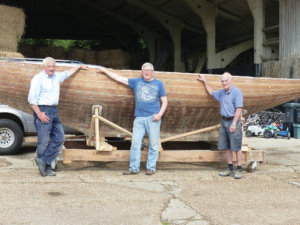 After a series of events that could have been plucked straight from a story book, a forgotten and neglected old keelboat has been restored, revived and put back on the Solent, thanks to the vision of four Island sailors, and eight years of hard graft.

Looking at the magnificent sight of the restored 1922 Seaview Mermaid, Cynthia – taking her place in all her gleaming scarlet glory among other classic boats at Cowes Classics Week in July – it would have been hard to believe that, but for a certain serendipitous meeting, this historic vessel might have ended up as firewood.

The unlikely series of events began in the summer of 2008, when Sea View Yacht Club received an intriguing call from someone in West Sussex, with an alternative kind of ‘fisherman’s tale’.

A roundsman who had been delivering fish to a house in the village of West Kirdford noticed what looked like “an upturned whale” sitting in the orchard, covered in leaves.

He asked the owner of the house about it and was told that when she picked up the keys to the place three years previously, and asked about the ‘thing’ in the orchard, she was told: “It’s a mermaid, you can burn it”. Fortunately she hadn’t acted on that advice!

Continuing on his round, the fish seller mentioned the odd sighting to another of his customers – a man who had worked in the marine industry, and so was happy to go and have a look.

Having lifted up the tarpaulin, he quickly realised he was looking at much more than a pile of kindling, and with the knowledge of what ‘mermaid’ meant, the man knew exactly who to call: Sea View Yacht Club, home of the famous Mermaid fleet.

Enclosing a series of photographs, he reported that the Mermaid was little more than a hull – no deck or rig – but might be restorable.

Initially, the photos were passed to Bob Somers, who has always had a passion for the history of the class – and he was in no doubt that it was genuinely a Seaview Mermaid.

The club put up a notice in case anyone was interested in taking on the mammoth project, and that was when member Mike Randall along with Bob Somers stepped forward and decided to head over to the mainland for a look.
“We crawled under the boat with a camera and screwdriver and established that the basic hull was in surprisingly sound condition” said Mike, a retired engineer.

Having agreed a price, the men hired Island company Bartletts in January 2009 to crane lift and transport the Mermaid back ‘home’ for the painstaking process of restoration. 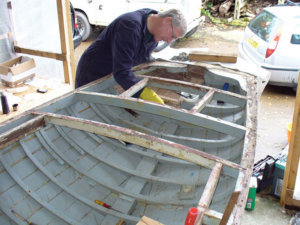 Not that anyone expected it to take eight years, as Mike jokes: “We kept saying ‘oh it will take about two years’, but the trouble was, we said that at the end of every two years!”

The men had rented a barn at Little Upton Farm in Ashey, owned by occasional Mermaid sailors Alison and Howard Johnson, and it was there that they spent hundreds of hours on the boat, undertaking what Mike describes as ‘very laborious’ work.

That labour of love included stripping out any of the old timber that wasn’t original, removing the glass fibre sheathing, straightening and strengthening the damaged frame, sanding off all the old paint and varnish, and creating new timber knees, floors and beams, all to original designs.

“All these things take longer than you expect, and we haven’t actually calculated the number of hours we put in at the barn” said Mike.

“It’s just as well that we all have very understanding partners and families – and we were always cheered on by Alison, who kept us constantly supplied with coffee and biscuits!”

As work progressed, the syndicate approached Totnes-based yacht designer Ed Burnett to design a suitable rig – in a classic style but using modern materials. Ed – who sadly died before he could see Cynthia re-launched – also recommended and sent them to the craftsman mast-makers Collars near Oxford, who hand-made the boat’s new mast and boom from Douglas Fir.

By late last year, with most of the major works done, Cynthia’s owners decided to put her into the boatyard of A.A. Coombes at Bembridge for the specialist finishing works, which included the re-sheathing of the hull and fitting of the deck. 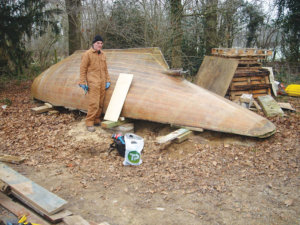 The boatyard’s owner Bill Mitchell worked with his craftsman Andy Bartlett, and Chris Earley did the painting.

“She’s been finished to a fantastic condition, all in beautiful, craftsman-like style – and we couldn’t have been more delighted” said Mike.

The dedicated foursome were able to share their delight with around 40 other enthusiasts who turned out for the boat’s long-anticipated re-launch on July 13.

Cynthia went back into the water where she belonged for the first time in about 30 years – to the accompaniment of a whole lot of champagne-drinking!
Then, just a few days later, having literally only just screwed the last fittings into the deck, the proud owners sailed her to Cowes, to compete at the Charles Stanley Direct Cowes Classics Week event, organised annually by the Royal London Yacht Club where she competed in racing in Cowes waters for the first time in 55 years.

The opening race was her very first outing, and although not up with the prizes, Cynthia came fifth of the 29 yachts competing, and completed all five races of the series.

More than anything, for the owners, it was great fun – but they also had the thrill of seeing their efforts recognised, when they collected the regatta’s Classic Boat Magazine Concours d’Elegance award in honour of Cynthia’s stunning looks. According to Mike, they were understandably “glowing with pride”.

During the restoration process, the four owners uncovered more fascinating information about the chequered history of their boat.

One of a small and exclusive racing fleet of 11 boats designed by St Helens-based yachtsman and naval architect Alfred Westmacott, their 1922 Mermaid had originally been purchased for – and named after – her first owner Cynthia Methuen, a 16 year-old heiress whose father Alfred was an underwriter at Lloyd’s.

Built at Woodnutts Boatyard, Bembridge, the boat was sailed every year by Cynthia until 1937, and remained in private ownership until and throughout the Second World War.

After the war, the fortunes of many of the Mermaid owners had been affected, and it was at that point that a member of Sea View Yacht Club had the brilliant idea for the club to buy the 10 boats en masse and make them available for all members to sail. He also arranged for his Regiment to charter them for their annual regatta.

And the man with that bright idea? It was none other than Colonel Tony Somers, father of Bob Somers, who is now one of the four co-owners of Cynthia.

The result of the Colonel’s far-sightedness is that Sea View Yacht Club now stands out among its peers for having its own fleet of one-design racing keelboats, owned and used by its members. The idea to create a fleet of identical racing boats was so that races would be an equal test of sailing skill, rather than a matter of superior marine technology.

Having been raced off the Island for over 100 years, the Seaview Mermaids are a well- known sight in the Solent, and remain the oldest class of boats to have been consistent entries in the annual prestigious Cowes Week regatta.
There are currently 13 later-designed Mermaids owned by the Club which are raced daily throughout the April to September season, along with a handful of privately-owned ones. Some are in-class with the Club-owned boats, whilst others are of previous generations. 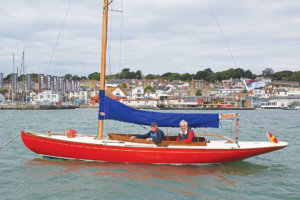 The iconic 1922 version, which was extremely robust but costly to build, was finally phased out from 1962, with the fleet being sold off to individual buyers.
The old boats went to all corners of the world, and today there are seven or eight, including Cynthia, still in existence.

Others are known to be located in Greece, the Orkneys, the West Country and the East Coast as well as one in Cowes and two inactive ones at Bembridge.
“What makes the Mermaid so attractive” says Mike, “is that it is a classic boat, and the forbear of a very successful fleet”.

As for the original owner Cynthia, she died in 1993, at the age of 87.
Mike and the syndicate did manage to track down the boat’s previous owner, now a very elderly gentleman living in Brighton, and brought him to see the vessel during restoration.

In some ways, he had been Cynthia’s saviour – because it was during his 20 years of ownership that he sheathed her in glass fibre, protecting her hull for this latest sailing incarnation of a legendary lady.