Roy Hayward: Iconic medal for the man of steel

Home/Interviews/R/Roy Hayward: Iconic medal for the man of steel
Previous Next

Roy Hayward: Iconic medal for the man of steel

Losing both legs is a catastrophe that’s almost impossible to imagine – particularly when it happens to a fit and active, sports-loving young man of 19. But an incredible 72 years after suffering just such a blow, Roy Hayward is the inspiring, living proof of the steel that can shine from the human spirit. 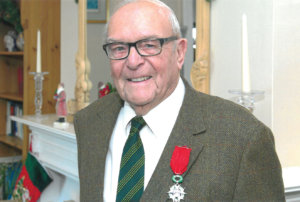 In December Roy, now 91, was one of a small number of surviving British ex-servicemen to be presented with the iconic Legion d’Honneur medal from the French Government. Jackie McCarrick spoke to him.

It’s clear within minutes of talking to Roy Hayward that he’s very much a ‘glass half full’ kind of character.

Bubbling with warmth and humour, this remarkable nonagenarian couldn’t suppress his delight at having been presented with the Legion D’Honneur.

“It was lovely to hear the news – and very unexpected, particularly after all this time” he said.

“I was especially pleased that the medal was presented to me at our Blesma (British Limbless Ex-Servicemen’s Association) Christmas lunch, and by the Lord Lieutenant, who is President of our branch.

Roy is full of gratitude to Blesma, the organisation that contacted him to offer support after he arrived back home to Surrey in 1944, as a young double amputee with an uncertain future ahead of him.

“I can’t emphasise the big part they played in my recovery during those early days and over the years since” he said. 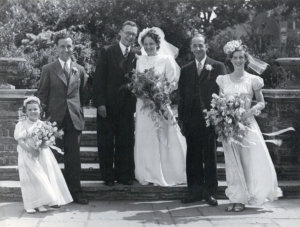 Roy and Barbaras wedding in 1948

Roy had been happily working as a bank clerk in London when he joined the Army in 1943 and was sent to Bovington Camp to train as a tank crew member.

They landed on Gold Beach near Arromanche and initially Roy was earmarked for the reserve crew – but fate saw him being called up for action on the evening of June 6.

Less than three weeks later, on June 25, the event happened that would change Roy’s life.

“We were going down a lane in Fontenay when our Sherman tank was hit twice by shells” he recalls.

“The second one penetrated and we caught fire. Although I was fully conscious, it was a little while before I realised what had happened.  I was already getting a few burns and all I knew was that I had to get out.

“I had ammunition exploding all around me and when I looked down I could see my right leg was completely shredded below the knee, and my left foot just had the heel remaining.”

Roy’s initial thoughts were not surprising:

“I was devastated and wondered if I should just put an end to it myself with a gun – but my hands were too burnt to do anything.”

He quickly adds:  “I’m jolly glad I didn’t though! The next thing I heard voices and the stretcher-bearers were there, taking me to the field hospital”.

The other three crew and one infantryman from the tank escaped with less serious injuries than Roy, who had been sitting lower down in the vehicle when it was hit.  He shrugs and says “I was the unlucky one that day.”

After having both legs amputated at the field hospital, he recalls a “very uncomfortable journey” back across the Channel to hospital in Portsmouth, where his dressings were changed before he was sent on by train to another hospital in Preston, to escape the dreaded Doodlebug bombing of the south coast. 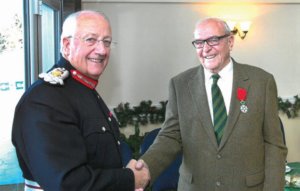 In Portsmouth, the nurses had found his wounds were completely clean – but only because they had been eaten by maggots.

“It seems those maggots did me a favour” he laughs.

The worst moment came in Portsmouth, though when Roy’s parents visited him – unaware of how serious his injuries were. “They hadn’t been told what had happened to me so it was a horrible moment when they saw my wounds.”

Preston was a peaceful haven by comparison, and he spent three months there convalescing and having casts made for  legs.

Always able to see the funny side, he recalls being taken to a shoe shop – where he experienced the novelty of being allowed to choose whatever size he wanted. He opted for a size 9!

As he waited for his new limbs to be made by specialists at the famous Roehampton facility, Roy returned home to his parents in Surrey, where he attempted to pick up the pieces of his life.

“I had to wait some time for my legs because there were thousands of us who had lost limbs during the war” he said.

“I found it hard not being able to get about, especially as I had always been keen on rugby, football, cricket and swimming.

“But relatives and friends were a real help, taking me out in the car and that sort of thing. In fact I have to say that all through my life, I have found people have been extremely kind.”

After some months, Roy received his prosthetic legs, but because there were so many amputees, he jokes that it was pretty much a case of “here are your legs – get on with it!”

Much as he appreciated them at the time for getting him back on his feet, those first artificial legs were a world away from the modern ones he wears now.

Made from unforgiving metal below the knee, they were attached to a leather corset that went to the thigh, and were harnessed over the shoulders with straps – a far cry from today’s lightweight plastic prosthetics.

With the aid of these cumbersome artificial legs, Roy was able to get back to work at the National Westminster Bank in London’s Covent Garden, travelling by train and doing strenuous daily walks on them from, over Waterloo Bridge and into the City.

“It probably helped that I’d started cycling in them straight away, to strengthen the muscles” says Roy, “but when I think back now, I do wonder how on earth I did it.”

After a while, though, the London commute became just too much, and Roy was re-located by the bank to a branch nearer to home in Surrey.

In 1948 he married a fellow bank employee Barbara, and together they shared the adventure of buying a plot of land and having their own home built.

After many years of happily working at the bank, in 1973, Roy began to have circulation problems in his left leg stump, and that led to a further amputation that took it to the same level as the right leg.

Then aged 48, he decided it was time for a life review, and by mutual agreement with the bank, he took early retirement.  Not only that, but he and Barbara took the chance to create a completely new life at Seaview on the Isle of Wight.

“I’d had one week’s holiday here and thought how lovely and peaceful it was” he says. “I saw the Seaview Regatta, the lovely Solent views and just loved it”.

“I had one day here in the summer and found a house I liked at Solent View Road – right up on the hill with lots of steps up to it.  My wife came up and said:  “Quite impractical!”

However, they compromised on a house on the flat part of Solent View Road, and quickly settled into their new life, Barbara taking a part-time job and Roy quickly throwing himself into charity work.

He was treasurer of the local Cancer Research Campaign group for 22 years, was a member of Ryde Lions for 15 years (including a term as President) and was an active bowls player until two years ago at Bembridge Bowls Club.

But by far, the cause that’s been closest to his heart is Blesma, the organisation that has helped him so much over the past 70 years.  He was its local treasurer for many years and remains  Chairman to this day.

Whilst membership numbers are now obviously diminishing, the Island group still runs some social occasions and offers help and support to the widows of service personnel.

Now widowed himself – Barbara sadly died three years ago – Roy continues to live in their original Seaview home, and says:  “I’m told it’s a good thing that I have a house with stairs! I don’t walk as much as I used to so it’s good to have some stairs to climb at least.”

He also still drives – in fact, he had his licence renewed again last year – and enjoys the freedom of being able to get about and see people in his adapted Honda Jazz.

Always able to see the funny side, Roy recalls with a chuckle how the first motorised vehicle he drove as an amputee was a motorcycle – with a sidecar for Barbara!

Hardly the safest or most predictable option, but then that’s pretty much how Roy has gone about things. 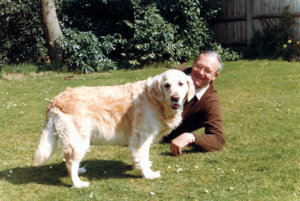 He can also joke about the leg ‘malfunctions’ that have happened to him over the years – such as the time a foot dropped off while he was playing bowls.

“I had to phone my wife and say ‘bring me a leg’ … we had a spare in the loft” he says, with almost comical matter-of-factness.

Then there was the occasion when a foot came off while he was hurrying through Waterloo Station – much to the horror of an elderly lady who almost fainted with shock.

Regular wear and tear on the prosthetics mean that Roy still has to attend the specialist centre at St Mary’s Hospital every six months ‘for repairs’.  He gets routinely fitted with new ankle joints and has the legs checked. St Mary’s also deal with stump problems, not just the supply and repair of limbs.

“I do so admire the work they do at the prosthetics centre – they are always helpful and provide such a wonderful service.

“While I have had some episodes, I have been so very lucky not to have experienced the continual pain and discomfort suffered by so many of my amputee friends.”

In fact Roy is such a positive and cheerful force of nature, it’s hard to believe that he’s endured such harsh physical challenges.

But, perhaps typically of that generation, he has no room for self-praise.

“I have had a lot of help and support from a lot of wonderful people, and I count myself lucky in that” he says. “There were many of us who lost limbs in the war but not everyone was as fortunate as I have been, and they suffered much more.”