[dropcap]I[/dropcap]t started life as horse stabling for royalty, enjoyed another incarnation as the Royal Naval College – and in the 21st century the Osborne Stable Block is experiencing a new lease of life as a thriving business park. We discover the story behind a remarkable transformation.

When local businessman ‘Tony’ Harrison was looking for new premises for his expanding East Cowes removals and storage business in the late 90s, the old stables at Osborne House were hardly the most obvious of places to look.

Empty and poorly maintained since the departure of its last occupant, a pine furniture making business, the premises back in 1998 were virtually derelict, blighted by vandalism and wildly overgrown – and yet something about them sparked Tony’s curiosity.

He recalls that he and his wife Marion had been driving home from their former premises at the old water pumping station in Victoria Grove when they passed Osborne Garage, and happened to notice the old stable block buildings lying just to the left, on the Osborne House Estate. 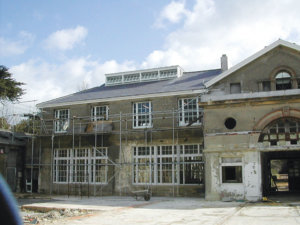 Driven by the pressing need to find more space for his removals business, Tony impulsively arranged a meeting with the manager of Osborne House Mick Poole, but was told that the Stable Block site was actually the domain of The Crown Estates.

Ultimately, thanks to Mick’s intervention, Tony did hear back from Crown Estates, who agreed to grant him an initial six-month lease on the Belfast building – being one out of the eight buildings on site that was at least potentially dry!

So, the Harrisons promptly re-located their business, and after the initial six months, were granted a further six months tenure.

During that time, in 1999, there was a Royal visit to Osborne House by the Prince of Wales, who was offically opening the refurbished Durbar Room, and asked afterwards to see the Stable Block.

He briefly entered the courtyard area – much of which had been enclosed by Saunders Roe for their design office – and one can only imagine the reaction when the architecturally-sensitive royal eyes fell upon what must have appeared to be a view of devastation and decay. 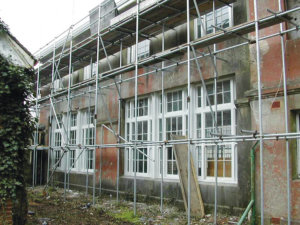 Just two weeks later, Crown Estates telephoned Marion Harrison and asked if Tony and Marion would be interested in taking out a 50-year repairing lease on the whole of the site!

It certainly wasn’t a decision to be taken lightly, as the site covered a sprawling five acres of land, and most of its eight buildings were in what he describes as “a very bad state of repair and dereliction”.

Despite the massive scale of the task, though Tony says:  “I decided it was worth taking the risk, and so with a new long lease from The Crown Estates, we took the plunge!”

Perhaps appropriately the date on which the Harrisons officially took on the repairing lease of the Stable Block was April Fool’s Day, 2000  – but the undertaking certainly wasn’t a joke!

Vectis Storage was formed that year, and the Harrisons gave up the removals side of the business in order to better concentrate on their storage facility, together with the restoration of the Stable Block.

Their old friend Colin Bedford became a partner both in the storage business and the restoration project, having previously been involved with Tony and Marion’s Antique Market and other enterprises. Colin had a wealth of knowledge and experience in building restoration, which made him an invaluable partner in such an ambitious and incredibly demanding project. His unpaid building skill, knowledge and labour were invaluable – quite apart from the financial assistance he gave to allow the project to keep on track.

As a way of capturing the overwhelming scale of the task ahead of them when they started out, Tony and Colin made a film of the buildings as they were, for posterity.

“Today we look back at it, and still can’t believe why we even thought about taking them on!” he says now.

As the former stable buildings are of Listed status and the main building is Grade 2* it means that all the restoration has to be done according to Listed regulations.

Tony’s vision was always to restore and develop each building as the family gradually built up their business – a labour of love that has now taken them 19 years, and still continues to this day, with areas being developed all the time.

The Harrisons’ business is now well established as a small business park and a new generation of the family is involved.  Son Richard is now managing operations,  his sister Poppy has recently joined the business – and dad Tony says “We hope and believe the business will continue successfully over the next 50 years!”

Meanwhile, as an ex-Royal Marine who’s been in business on the Isle of Wight since 1976, Tony has become increasingly absorbed by the chequered history of the Stable Block.  In fact he says that since taking on the site, he has constantly been learning just how remarkable and varied it is.

“From Queen Victoria to Saunders Roe, and particularly the Royal Naval College – it’s all been fascinating to discover” he says.

His passion for oil painting has also inspired him to paint a series of Twelve-foot square ceiling murals depicting the various stages in the life of the historic site.

“I am sure it will be appreciated by anyone interested in Queen Victoria and her family, The Royal Navy College Osborne, The Winslow Boy, The VADs, Military Aircraft, Black Arrow Rocket, Hovercraft design and East Cowes in general” says Tony.

Indeed, these buildings have witnessed such a wealth and variety of history since they were built by Victoria and Albert in the mid 1800s, that they certainly deserved to be preserved by future generations.

David and Sarah Burdett’s upcoming book on the multi-layered history of the Osborne House Stable Block is due for publication this year, to coincide with the 200th anniversary of the birth year of Queen Victoria and Prince Albert – both of whom were born in 1819.

Originally built as a relatively plain and modest stable block to accommodate the Royal family’s own riding and carriage horses, the buildings subsequently evolved through a series of incarnations, with uses by the Royal Naval College, rocket inventors, commercial enterprises and transport. 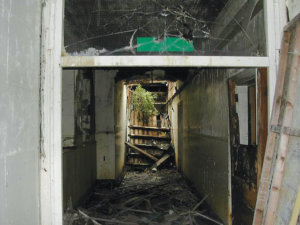 Says David:  “It seems somehow apt that the buildings started life to serve the transport needs of the Royal family and in our own times we have seen transport companies such as DHL and Island Oils being based there”.

He added that the vision and hard work of Tony Harrison and Colin Bedford had probably saved the buildings, which had previously been under serious threat of demolition.

The book’s chapter on Vectis Storage’s role in restoring the stable block describes some of the painstaking work that the two men have undertaken over the years:

“Tony and Colin started by removing all the “temporary” buildings that filled the courtyard which had been erected by Saunders Roe. The next stage was to repair the roof and then the roof-lights in the main classroom block – the old libraries – and the room above the archway. Years of water ingress had severely damaged the parquet flooring, the remainder of which was lifted and dried out carefully. The parquet flooring in the top room over the archway has been lovingly replaced and the rest was stored until a suitable time for replacement occurs.

The Cochrane Building – the old classroom block – was in a similar state. It had been built specifically for the Naval College.  In 2003 Tony was told it could be demolished!  but it had so much character that we decided to restore it.  thus preserving one of the buildings built specifically for the Naval College. So Tony lifted all the roof tiles, replaced rafters where necessary, repaired the cupolas that vented the rooms, and any window frames that were suffering, bringing the building back to excellent condition. “Old buildings need new uses ” is a catch phrase from English Heritage – storage and office space were provided in the Cochrane building. English Heritage later decided that it should be preserved, and it was then Listed Grade II.

Other rooms around the quadrangle courtyard received similar restoration. On the south side, the original tack and harness rooms had been turned into classrooms by the addition of large windows to the south. The slate roof had survived the wartime bombing but, by 2004, needed complete overhaul, which it received.

The rendered external walls needed attention in many places. Lime render was used to match the original. Signs relating to the Naval College have been preserved as they were, and there are still some hitching rings remaining from the Victorian stable.

At one stage Tony hoped to set up a proper display space in the two main classroom blocks, the site of the original stables. This would have shown the numerous uses the Stable Block had experienced. To enable this display, a new purpose-built storage shed would need to be constructed and a suitable access to the main road achieved. These criteria were difficult to meet, so a book about the Stable Block was proposed instead.

In 2014 Cottage Industry Business Park was established for small businesses needing space to set up in starter units within the Stable Block. Vectis Storage provides the public with individual lock-up storage facilities, large or small spaces as required.

For the first time since WWII, people began to see the stable block and subsequent Naval College in a new light. Many people had worked for Saunders Roe and British Hovercraft without realising what type of building they were working in. 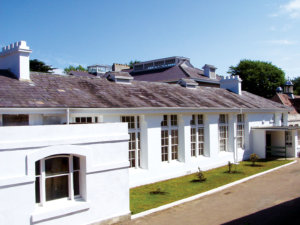 Tony’s work and enthusiasm for the Stable Block has resulted in interpretation boards being put on display, and even some minor archaeology. Recent concrete flooring in the courtyard had to be removed to discover the whereabouts of the drainage system installed in 1860. This has now been left visible for the public. He also excavated the remains of one of the white tiled plunge pools that were at the ends of each of the dormitory blocks. Restoration of this pool awaits the time and money as it is lower down on the list of restoration priorities.

East Cowes now has a much-used storage facility and business space. Constant restoration work has been carried out over the ensuing years. Thanks to Vectis Storage the building and heritage of the Stable Block and subsequent Naval College additions have been saved”.