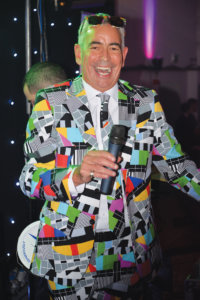 It started simply enough in 2009 – as a one-off charity dance party to celebrate Island DJ Tony Martin’s 30 years in the business.

The event was a huge success, selling out of all 500 tickets and raising a total of £5,200 for two local charities, Barely Born and the Earl Mountbatten Hospice, which had cared for Tony’s late mother, Eileen.

But the partygoers at that first event relished the mix of music, nostalgia, energy and pure good fun and enjoyed it so much that Tony was persuaded it was a show that must go on.

Since then, DECADeANCE has evolved into one of the most popular annual events on the Isle of Wight’s social calendar – and the countdown has already begun to party number 10, happening in November.

Explaining the origin of the event’s unusual name,Tony explains: “It came from a mix of decadence, as in ‘luxuriously self indulgent’ which seemed a good description of me playing my personal favourites and dance floor fillers from the 1960s up to present day – it was a sort of decade dance!”

Partygoers were also encouraged to dress to impress, and be as decadent as they dared to be with their outfits.

It proved such a heady mix, that everyone wanted a follow-up event the next year – and the rest, as they say, is history.  The colourful, high-energy event now caters for 750 people and always sells out months in advance.

Meanwhile, it continues to surprise with its decadent themes – the most memorable of which have been 007, Carnival and Space-inspired ones – while Tony has also surprised partygoers on the night with features such as pyrotechnics shows, live Samba bands and an ensemble of Star Wars characters, amongst many others.

Most importantly, though, in the past nine years a magnificent total of over £56,000 has been raised for Earl Mountbatten Hospice (now Mountbatten) and the launch of this year’s 10th Anniversary event  ‘A Decade of DECADeNCE’ is set to add even more funds to that impressive figure. 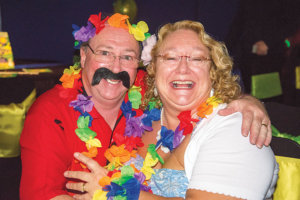 Tony reflects: “When I put on that first party to commemorate my 30 years as a DJ, I could never have imagined just how successful and popular it would become.  Once it did take off, my challenge was to make it more decadent every year and bring a new ‘wow’ factor that made people want to keep coming back. The effort by so many people with their decadent outfits every year and their clear enjoyment has continued to inspire me. After the second year, I set a personal challenge to raise £50,000 – and the fact that this was surpassed last year is testament to everyone’s help and support.

“Some people have come along every year and that’s incredible, but without everyone’s support – not just the paying guests but also the many companies who provide substantial discounts on services – it wouldn’t have been possible to raise the huge amounts we have for Mountbatten.”

Tickets for a decade of DECADeANCE go on sale on August 10 and are unlikely to hang around for long, so it’s advisable to get in quick if you fancy a decadent night out on Saturday November 24.